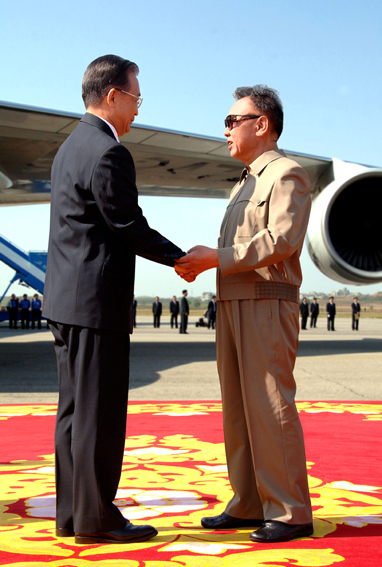 Despite having Pyongyang (and perhaps China) watchers glued to the news, Chinese Premier Wen Jiabao’s visit to the DPRK did not produce anything in the way of major diplomatic breakthroughs.   And why would it?  In their sixty-years of fraternal relations, the PRC and DPRK have done a good job of concealing any friction that may exist between the two nations.  It would be the height of insanity to expect either country to concoct and issue a joint communique about such a sensitive matter as nuclear or strategic weapons’ programs.  Although Kim Jong-il did express his willingness to engage in diplomatic talks with the United States as well as a return to the Six-Party Talks in a meeting with Premier Wen (see below).   Besides, the DPRK previously expressed a willingness to engage in bilateral and multilateral diplomacy during Dai Bingguo’s preparatory visit last month.  As a demonstration of goodwill, and perhaps to show external observers that Sino-DPRK tensions may not exist, Kim Jong-il picked up Premier Wen at the airport on Sunday (4 October).  General-Secretary Kim brought with him several hundred flower-waving North Koreans, roughly a dozen senior State officials, a coterie of members of the Guard Command and a military honor guard.  Premier Wen was then brought to pay his respects to the late DPRK President Kim Il-sung perpetually lying in state at Kumsusan Memorial Palace.  A motorcade then wended its way through Pyongyang’s city centre: “hundreds of thousands of Pyongyangites” obviously mobilized by the Orgranization and Guidance Department, and while the DPRK may be criticized for many things, no other country does these foreign leader parades better than the North Koreans (even if their attendance was compelled). 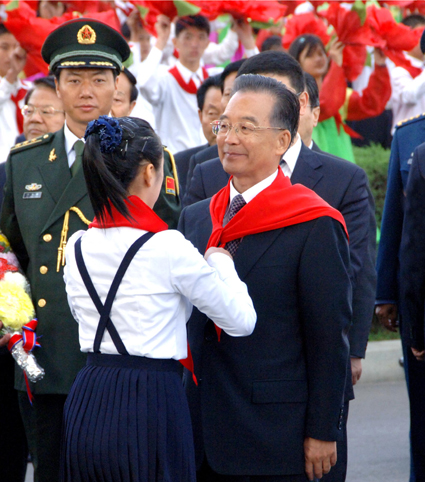 Premier Wen and General-Secretary Kim then took in the opera “The Dream of the Red Chamber” at the “newly refurbished Pyongyang Grand Theater.”  But aside from grand entertainments, there was business to be done.  Taking the lead, in a true counterpart position, DPRK Premier Kim Yong-il and a DPRK delegation held a meeting with Premier Wen and the PRC delegation at the Mansudae Assembly Hall, host of the DPRK’s unicameral and nominal legislature the Supreme People’s Assembly.  This meeting resulted in a series of agreements and memorandums of understanding encompassing customs controls, technology industry and environmental protocols (“the protection of wild animals”).  Amid all of these agreements and discussions, there should be little doubt that the DPRK’s nuclear program was a significant topic of discussion.

On Monday (5 October), Premier Wen was ferried back to the Mansudae Assembly Hall for a meeting with the DPRK’s nominal head of state and the President of the SPA Presidium Kim Yong-nam.  On Monday afternoon, Kim Jong-il went to the Paekhwawon State Guest House to discuss the DPRK nuclear and strategic weapons program.   The North Korean press made an unusual point of including a summary of General-Secretary Kim’s opening remarks to Premier Wen:  “The hostile relations between the DPRK and the United States should be converted into peaceful ties through the bilateral talks without fail.  We expressed our readiness to hold multilateral talks, depending on the outcome of the DPRK-U.S. talks. The six-party talks are also included in the multilateral talks.”  Statement made, with further “cordial” discussion, General-Secretary Kim then hosted a dinner party.  But the dinner party was merely a warm-up for the mass-games “Arirang” performance.

Prior to his departure on Tuesday (6 October) Premier Wen visited Thaekam Cooperative Farm located in the same district (kuyok) as Kim Il-sung Pyongyang Airport, he was escorted by the DPRK Ambassador to China and the other Kim Yong-il, a Vice-Minister of Foreign Affairs and former DPRK Ambassador to Libya, Algeria, Tunisia and Malta.  At the airport a dozen senior DPRK State officials including DPRK Premier Kim Yong-il (and, more or less, the same people who greeted him on Sunday) saw Premier Wen off.

This was an important opportunity for the current DPRK Leadership (which is not going anywhere for a while) to meet with a man who a major power in post-Hu Jintao China.   The immediate result of Wen Jiabao’s one-on-one with Kim Jong-il is that he voiced the DPRK’s intention to denuclearize.  General-Secretary Kim went so far as to couch this intention by referring to his father’s efforts prior to his 1994 death.  This does not mean that the Six-Party Talks will resume, nor does it mean that the DPRK will be disarming at any point in the near future.  Premier Wen has initiated a series of business deals–for North Korean minerals assets and expansion of PRC-DPRK joint venture corporations–that are likely inducements (soft pressure) to get the DPRK to return to negotiations with the United States.

One may venture so far as to write that the DPRK was presented with a tiered plan whereby if the DPRK meets certain benchmarks in its strategic weapons’ negotiations, then technical cooperation, education exchanges and Chinese investment increases.  That said, the North Koreans are wary of increased Chinese involvement in its economy.  It is not because they fear the Chinese undermining the KWP regime’s power; the Chinese are attractive partners because they do not make a habit of concerning themselves with domestic politics.  However, a greater Chinese presence may only undermine whatever p.r. credibility the KWP retains with the North Korean population.   It is interesting that on Premier Wen’s itinerary, he elected not to visit any of the PRC-DPRK business ventures.  That he visited a cooperative farm may be a sign that the DPRK is emphasizing food production, and more broadly its light industry, as against manufacturing and heavy industry.

Kim Jong-il was not as omnipresent as on previous visits by foreign leaders.  This was to be expected, given that his advancing age and his health problems last year.  However, General-Secretary Kim may have been avoiding any direct discussions with Premier Wen, until the Chinese Premier had met with General-Secretary Kim’s proxies and direct subordinates.  This was a matter of feeling the other side out, and allowing Kim Jong-il to act accordingly.  General-Secretary Kim also could present an impression to the Chinese side that he is at a point in his life and leadership where he does not have to be a micro-manager.

The biggest star of the DPRK-PRC meeting on the North Korean side was Premier Kim Yong-il.  Premier Kim was certainly acting on Kim Jong-il’s guidance and instructions, but this conforms to earlier analysis and reporting that General-Secretary Kim has assumed a broader, more big-picture method of leadership.  The DPRK’s guest lists (and these are not cohorts) have some evidence of the Second-to-Third Generation of North Korean leaders–Premier Kim Yong-il, MOFA Vice Minister Kim Yong-il, KWP Directors Kim Yang-gon and Jang Song-thaek.  Kim Yang-gon and Jang Song-thaek as the directors and representatives of the KWP Central Committee’s subordinate departments may indicate the National Defense Commission’s rising profile, Mr. Jang being a member and manager of the DPRK’s internal security apparatus, and Kim Yang-gon an alumnist as an NDC Councilor.   Premier Kim Yong-il (who has connections to Jang Song-thaek’s political patronage network) was at the forefront with Kim Yong-nam performing purely ceremonial duties.  Gen. Kim Jong-gak, Senior Deputy Director of the MPAF General Political Bureau and a member of the National Defense Commission, was a surrogate for the absent (and presumably ill) VMAR Jo Myong-rok.  So, perhaps, a change to a slightly (and in relative terms) younger generation and a shift toward KWP directors with direct ties to the NDC.

And for all those who are on permanent succession watch, one need only look at the salutations General-Secretary Kim sent to PRC President Hu Jintao and the leadership of the Chinese Party which alludes to generational shifts in leadership:

“Consistent is the stand of our party and government of the Republic to strengthen generation after generation the DPRK-China friendship, the precious common wealth handed down to us by the revolutionaries of the elder generation of our two countries.”

Other photos made available through the KCNA: 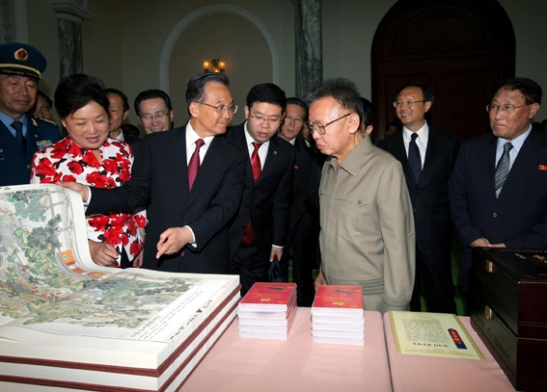 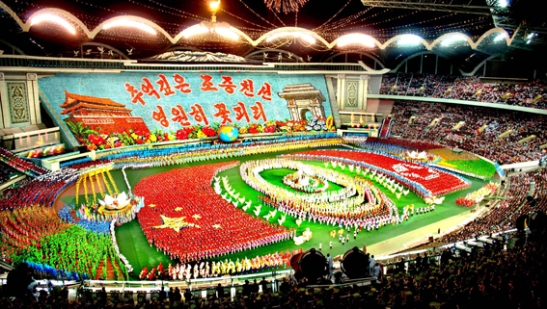 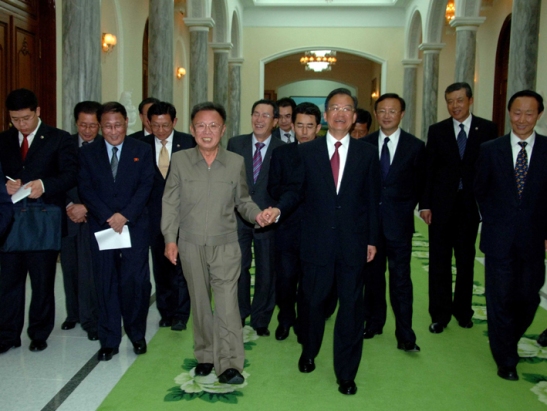 7 comments on “Wen, we meet again”