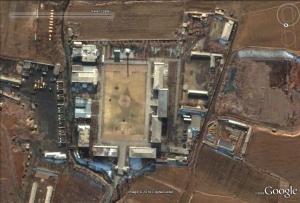 The Mirim War College, which contains the country's Electronic Warfare Research Institute, one of the country's premier cyber warfare education and training institutions.

KJI and the propaganda managers in the Central Party are fond of using proxy writer campaigns to advance a particular ideological motif.  It seems the DPRK’s crack electronic warfare operatives have exported the proxy writer campaign south, to reiterate the country’s denials and other statements about the Cheonan investigation.  The use of cyber warfare (although this is relatively low level) is not entirely unexpected, as several former ROK officials anticipated in late April some type of electronic activity from the DPRK targeted to the South.

ROK officials say that the DPRK are posting online comments and essays, as well as sending letter, signed with the names of ROK citizens whose “residential identification numbers.”  These ID numbers were believed to have been taken during previous NK hacking.  Chosun Ilbo reports:

North Korea has launched a cyber campaign denying all involvement in the sinking of the South Korean Navy corvette Cheonan in the face of crushing evidence to the contrary. Using stolen IDs of South Koreans, the North is spreading claims on South Korean portal sites that the sinking was fabricated.

The posts are broadly the same as a statement from the North’s National Defense Commission, its top policy body. It was uploaded on the state-run North Korean website Uriminzokkiri.

Another article which the North posted on a Korean-Chinese website under the title “Organizations that have benefited from the Cheonan sinking” has also found its way to some South Korean portal sites.

Kim Sung-min, the president of Free North Korea Radio, said, “There has been a sudden increase in the number of posts calling the Cheonan incident a fabrication on our website. We suspect that there are systematic propaganda tactics behind these articles.”

An intelligence official here who spoke on condition of anonymity said the communist country has apparently used South Korean residential identification numbers to post online messages that regurgitate its denial. Almost every South Korean adult is assigned such a number, often using it to validate a Web account.

“It is our understanding that the North is using South Korean people’s IDs to post messages and create Internet opinion that the investigation was a fabrication,” the official said.

Residential identification numbers, despite their wide use, are often criticized for being vulnerable to hacking.
The official did not elaborate, but his comments came after intelligence officials said last week that North Korea has sent letters to civilian South Korean organizations to claim it has nothing to do with the sinking.

Kim Tae Hong writes about the letters being sent in Daily NK:

The receiving companies had all previously done business with North Korea through the National Economic Cooperation Federation in Beijing, from which the letter appears to have been faxed.

The five-page letter entitled “Public Letter to the South Chosun People” apparently originated from the central committee of the Fatherland Reunification and Democracy Front, which is an espionage organization rooted in “united front” tactics.

Alongside claiming that the Cheonan incident was fabricated by South Korea, the letter also says that voting for the ruling Grand National Party on June 2nd is the same as inciting a war, and asserts raising tensions is deleterious to the national economy.

According to the police, others have received another form of the letter entitled, “Informing the South Korean Brethren,” supposedly sent by the Korean Council for Reconciliation and Cooperation.

You can read two previous vignettes on the DPRK’s electronic (cyber) warfare activities here and here.

One comment on “NK’s PR Cyber Blitz in South Korea”