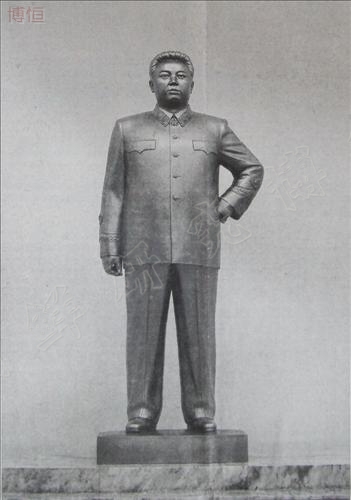 One of the only known images of a bronze statue of Kim Jong Il has surfaced.  Open Radio for North Korea published the photograph of the KJI statue, which appeared on the cover of the Korean People’s Army official newspaper (Choson Inmingun), along with bronze statues of KJI’s parents, the late DPRK President Kim Il Sung and his first wife, Kim Jong Suk.  The three Kims form a kind of DPRK holy trinity; the Generals of Mt. Paektu.  This is most likely the first time these images have appeared outside the country.  The only other rumored bronze or golden statue of Kim Jong Il is reportedly on the campus of the Ministry of People’s (Public) Security University in western Pyongyang.  It is not clear if this is the same statue.

A South Korean activist group on Friday unveiled a rare photo of a bronze statue depicting Kim Jong-il, North Korea’s ailing leader whose family has been the focus of an intense cult of personality since his father founded the communist state decades ago.

The photo, released by Open Radio for North Korea, shows a standing Kim Jong-il with his left hand positioned on his lower back. On one side is a photo of a statue of Kim’s mother; on the other, his father, Kim Il-sung.

In the statue, which was placed on the front page of the North Korean military newspaper, Kim Jong-il, 68, looks much younger and is dressed in an army uniform.

This is the first such photo to be seen outside North Korea, while only plaster statues of him seated in a chair had been shown by official media before.

The new statue of Kim Jong-il has drawn heightened attention as rumors have surfaced that he could soon pass down power to his third son, Jong-un, in what would be the only back-to-back hereditary power succession in the history of the communist world.

In Pyongyang, a huge statue of Kim Il-sung, who died in 1994, is billed as a must visit for both domestic and foreign travelers to the North Korean capital. His body remains in a public mausoleum, lying in a glass coffin after being embalmed.

Jong-un, thought to be in his late 20s, “probably led the work of creating and unveiling the statue” of Kim Jong-il, the Open Radio for North Korea quoted an unidentified expert as saying.