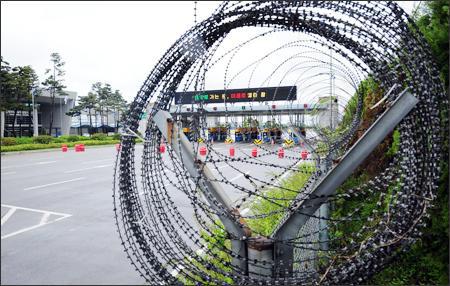 Dorasan Customs, Immigration and Quarantine Office near the inter-Korean border in May 2010 (Korea Times)

The DPRK is dealing with its first reported outbreak of foot-and-mouth disease since 2007.  The DPRK banned ROK pork and beef shipments into Kaesong Industrial Complex in late December, as well as ROK poultry in November due to concerns over avian flu.  Both diseases hit the ROK in the last few months, and ROK authorities have been vigorous in their management.  Yonhap reports:

Citing recent visitors to the impoverished communist country, South Korean government officials said Tuesday that the North is believed to be stepping up its quarantine efforts after outbreaks of the deadly animal disease were reported.

“Military personnel are said to have been mobilized in the fight,” one official said, speaking on condition of anonymity because the information was currently classified as intelligence.

It remains unclear where the foot and mouth disease, if confirmed, may have originated, but since November, South Korea has been struggling to contain the disease on its soil.

North Korea has banned the inflow of pork and beef from South Korea since late last month for fear that the disease may spread there.

In 2007, North Korea suffered outbreaks of foot-and-mouth disease, prompting South Korea to dispatch a team of animal health experts amid a mood of reconciliation.

According to a report in JoongAng Ilbo, DPRK authorities are restricting access to Pyongyang.  There are also reports that people have consumed tainted meat.  The DPRK managed a swine flu outbreak in December 2009.  Christine Kim reports:

Although the extremely contagious disease has only been detected in areas near North Korea’s capital of Pyongyang, the communist military is known to raise livestock in large numbers to feed its soldiers. The source said that North Koreans have been consuming infected pigs and cattle instead of culling them.

FMD is known to be harmless to humans. South Korea has been battling the disease for weeks.

This is the second time that North Korea has experienced an outbreak of the disease. The first outbreak was reported in 2007.

At that time, officials from other countries and from the World Organization for Animal Health visited the country on a consultative mission and said there was a “limited danger” for severe outbreaks in the country. Roughly 4,000 animals were culled during that outbreak. It’s not yet known if the same aid will be given this year from international organizations.

North and South Korea cooperated in 2007 against the outbreak, but frigid current relations may preclude that. 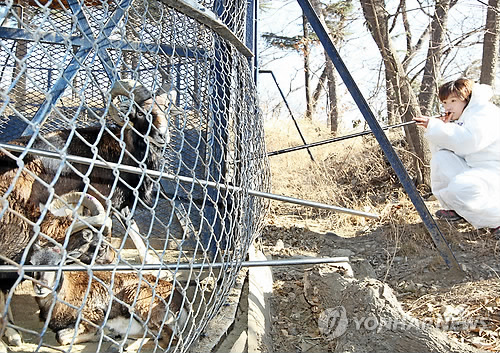 (Daegu, South Korea) A veterinarian vaccinates mountain goats against foot-and-mouth disease using a blow gun at Dalseong Park in Daegu on Jan. 17. The vaccination was part of a nationwide effort to block the spread of the deadly disease, which was first reported in Andong, North Gyeongsang Province, on Nov. 29. (Yonhap)