North Korean leader Kim Jong-il inspects a fish farm in a northern region, according to this photo released by the country's official Korean Central News Agency, which did not say when the activity was carried out. (Yonhap)

Has Kim Cho’ng-il changed his shoes? Around 12 May [Thursday] Kim Cho’ng-il was reported to have visited Kujang Fish Farm.  Yonhap reports on the photograph released of his visit:

North Korean leader Kim Jong Il has recently begun sporting his trademark high-heeled shoes again, a development that could raise an intriguing question about whether his health has improved.

Kim had sported high-heeled shoes that increased his height to what is believed to be 162 centimeters, or about 5’3″, before he reportedly suffered a stroke in 2008. Since then, he has switched to sneakers and flat dress shoes.

But a photo released by the North’s official Korean Central News Agency on Saturday showed Kim wearing a pair of shoes with 2- to 3-cm-high heels during an inspection tour.

These heels are bit lower than those on the shoes he had previously donned during official events, including his summit with then South Korean President Roh Moo-hyun in 2007 when Kim wore shoes with 6- to 7-cm-high heels.

The reappearance of Kim’s signature shoes may signal that his health has improved, though details were not immediately available. 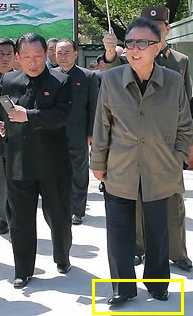 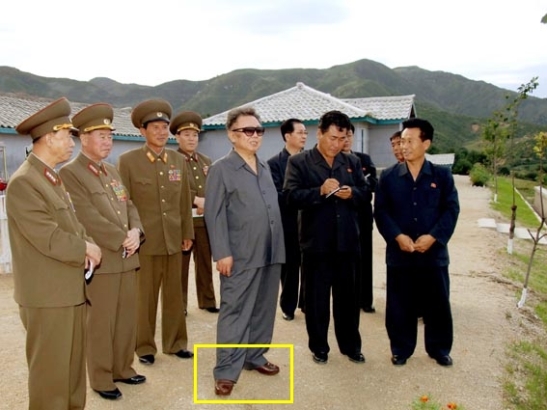 The style of shoe was a famous for wearing highlighted in this 2007 KCNA photo of a guidance tour (Photo: KCNA) 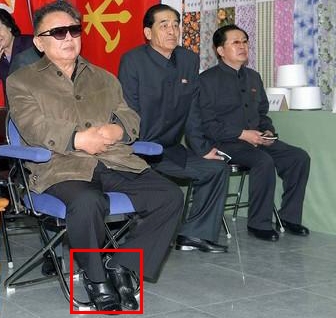 The leather sneaker-style shoe Kim Cho'ng-il has worn from late 2008 through 2011, including this photo released in early May

After being briefed on the farm before a huge map showing its panoramic view, he went round various places of the fish farm including a hatching room to learn in detail about fish breeding there.

Noting that the Kujang Fish Farm is the best place for fish breeding as it abounds in water resources and quality of water is good, he stressed that the fish farm ensuring profitability and equipped with cutting-edge facilities is the one desired by the WPK and capable of bringing the people substantial benefits.

He set forth tasks to serve as guidelines for further developing the nation’s fish farming.

Fish breeding is a very economic production field as it ensures high profitability, while spending less money, and the shortest cut to providing people with fresh fish in all seasons, he said.

Kim Cho’ng-il was reported to have made several visits by KCNA between 6 May and 9 May.  On 7 May Kim Cho’ng-il was reported to have toured the Namhu’ng Youth Chemical Complex which is located near Anju, South P’yo’ngan.  According to Yonhap News Agency the ostensible purpose of his visit was to promote fertilizer production, which he has done on previous visits in 2011 including a January appearance at the Hu’ngnam Fertilizer Complex in South Hamgyo’ng. 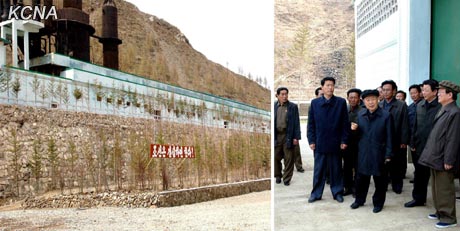 DPRK Premier Choe Yong-rim visited the complex, also to promote fertilizer production on 29 April.  Choe also presided over a national meeting there, held 1 May (International Labor Day; May Day). Interestingly, on 10 May KCNA reported on Choe visiting Hyesan Youth Mine in Yanggang Province, a follow-up trip to KCI’s guidance tour in April. 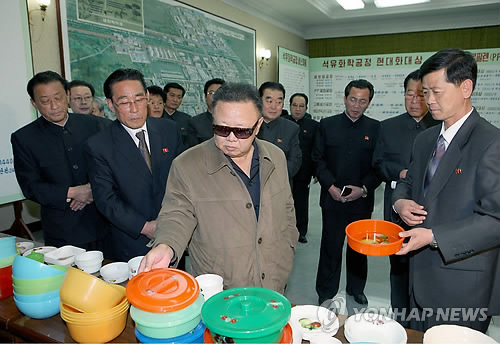 North Korean leader Kim Jong-il (second from R) looks at products during his visit to Namheung Youth Petrochemical Factory in Anju, South Pyongan Province. The (North) Korean Central News Agency released the photo on May 7, but did not elaborate on when the visit was made. (Yonhap)

It is a miracle that the workers of Namhung successfully completed the construction of the second system of gasification process in a short span of time by their own efforts and with their own technology, he noted, highly praising them for building a giant structure by displaying popular heroism and patriotic devotion.

The completion of the first and second systems of gasification process in Namhung is a shining victory of President Kim Il Sung’s idea of building Juche-oriented chemical industry and a precious fruition of the tremendous mental power of the Korean workers intensely loyal to the party and the leader, he said, and continued: “Our party is strong and our socialist country is winning one victory after another thanks to the huge unit of the revolutionary and militant workers who performed shining feats in the gasification project under the slogan ‘Korea does what it is determined to do!'” Then he went round the stable, the essential foodstuff shop and Chongchun Health Complex to learn in detail about the supply service at the complex and cultural and emotional life of the workers there.

Everything is going well at the complex thanks to the good supply service, he said, praising the party and administrative officials of the complex for retaining a firm hold on the supply service and making tenacious efforts to improve it with a correct view on the workers, the master of production.

Watching a volleyball match and swimming in the newly built modern Chongchun Health Complex, he was pleased that the workers were having an ample cultural rest.

He watched various consumer goods produced by the complex before stressing the need to produce many more quality goods very necessary for improving the standard of people’s living.

The most important task before the complex is to focus efforts on keeping the production of fertilizers going at a high rate and send greater quantity of fertilizers to the socialist cooperative fields, he said.

Another important task before the complex is to wage a dynamic drive to increase the varieties of chemical products needed for people’s living, he added.

Prior to traveling to Anju, Kim Cho’ng-il was reported as having visited several factories in and around Pyongyang.  Seen in attendance at KCI’s side was deputy director of the CC KWP Light Industries Department and one-time DPRK Premier, Pak Pong-ju.  KCNA reports about one leg of KCI’s promotion of light industries and consumer goods:

He looked at clothing and shirting materials made from Tetron spun rayon fabrics, cotton chequer and curtain cloth one by one and underscored the need to increase the production of clothing materials and varieties of fabrics liked by people.

He enjoyed a performance given by members of the itinerant art squad of the mill on the spot and highly appreciated their splendid performance.

Kim Cho’ng-il was also reported on 10 May to have attended a concert given by the art group of the Kim Hyo’ng-chik [Kim Hyong Jik] University of Education.  One of KCI’s former wives served as dean and president of KHCU for a number of years.

Its repertoire included chorus “Glory to Our Great Party”, poem and song “Before Board Bearing the Autograph of the Fatherly Leader”, sketch “A Full Mark”, male chorus and story-telling “We Are Called by the Future of Thriving Nation” and poems and choruses “Green Pine on Nam Hill” and “March of Korean Youth”.

He expressed great satisfaction over the splendid performance given by students of the university with works of great cognitional and educational value as they truly reflect their life. He highly appreciated their successful performance and extended thanks to them in the name of the C.C., the WPK.