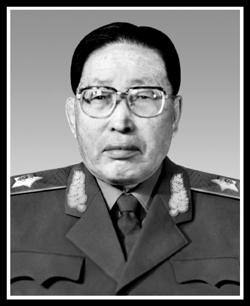 Ri Jong San (Yi Cho’ng-san) passed away on 23 July (Saturday) at the age of 87.  Ri was born in China in 1922.  He served as chief of staff of the former KPA 2nd Army Group in the 1960s.  In 1988 he was promoted to Colonel General and in 1989 was appointed Vice Chief of the KPA General Staff Department and in the 1990s served as director of the Munitions Mobilization Bureau.  Ri was promoted to General in April 1992 and Vice Marshal in April 1997.  He was elected a deputy to the Supreme People’s Assembly in 1990 and re-elected through the 12th SPA in 2009.

He participated in the anti-Japanese revolutionary struggle commanded by President Kim Il Sung and bravely fought for achieving the liberation of the country with arms in his hand in the darkest period of the colonial rule of the Japanese imperialists.

After the liberation of the country he grew up to be an able military officer under the care of Kim Il Sung. He worked hard to protect the Party and the leader with his life and develop the People’s Army. He contributed to the victory in the Fatherland Liberation War by commanding servicepersons to wipe out enemies in the war period.

He devotedly worked to defend the security of the socialist country and gains of the revolution, holding responsible posts of the People’s Army for years.

He was awarded the titles of Hero of the DPRK and Labor Hero, Order of Kim Il Sung and many other state commendations for his feats performed for the country and the revolution.

An obituary of Ri Jong San was jointly issued by the C.C., the WPK, the DPRK National Defence Commission and the Presidium of the DPRK Supreme People’s Assembly on July 23.

Ri was not the only DPRK elite who died this week.  On 27 July KCNA reported that Kim Jong Il had a floral wreath delivered to the funeral for Rodong Sinmun deputy editor Kim Chang Sik.