Kim Jong Il (Kim Cho’ng-il) continued his visit Sunday (21 August) to Russia’s Far East with a visit to Amur Oblast, which included a tour of the Bureiskaya hydroelectric power plant.  There was a small reception and send-off at the local train station.  According to Amur news agency, during his visit to the power plant, he toured the machine room and then watched the water discharge.  He departed the city in the late afternoon, as he wends his way to Ulan Ude where his meeting with Russian President Dmitry Anatoliyevich Medvedev is expected to occur.  RT reports:

North Korean leader has been greeted with Russian traditional bread and salt in Russia’s Far Eastern Amur Region as he came off his armored train. Kim Jong Il’s security was guarded heavily by dozens of police.

People living nearby were advised to veil their windows and photo and video shooting were prohibited, local news agency Amur.info reported.

The North Korean leader stepped out onto a red carpet and was then swept off in his very own Mercedes-Benz, which had travelled with him on the same armored train.

The motorcade headed for the local Bureiskaya hydropower plant where he spent just five minutes.

Kim Jong Il is now proceeding on his train to Ulan-Ude, the capital of the Republic of Buryatia, where he is due to meet with Russian President Dmitry Medvedev.

Kim Jong Il signs a guestbook during his visit to a hydroelectric power plant in Amur Oblast on 21 August 2011. Arrow indicates an individual believed to be his wife, Kim Ok (Photo: Port Amur/Amur information agency) 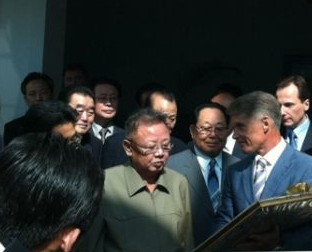 KCNA reported about KJI’s first day in Russia, as well as a selected list of the members of his travel party:

He was presented with a souvenir by Sergey Darikin on behalf of the Maritime Territorial Government and people.

After a while, he left for his destination amid send-off by senior officials of Russia.

Prior to it, he left the country to pay an unofficial visit to Siberia and the Far East Region of the Russian Federation.

His visit to Russia, another event in achieving world peace and security and the human cause of independence, will mark a historic occasion in boosting the DPRK-Russia friendship given steady continuity generation after generation and putting strong impetus to the drive of all the servicepersons and people to build a thriving socialist nation. 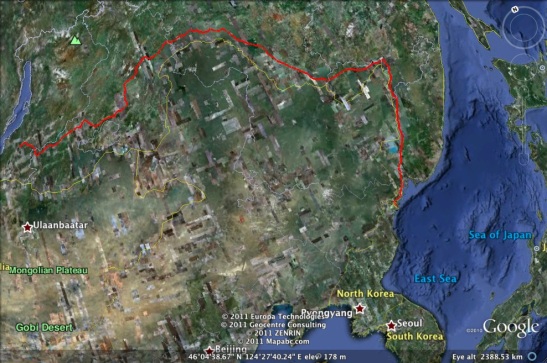 In images taken by a local news agency, an individual who resembles KJI’s current wife, Kim Ok, was also seen in attendance.  Kim Jong Un (Kim Cho’ng-u’n) was neither listed nor observed to have accompanied KJI.  AFP (via Channel News Asia) reports:

Korean Central News Agency confirmed on Sunday Kim’s “unofficial visit to Siberia and the Far East” region at the invitation of Russian leader Dmitri Medvedev, calling it a “historic occasion”.

But Jong-Un, the leader’s youngest son and heir apparent, was not listed in the official entourage.

The young protege, believed to be in his late 20s, was made a general and given senior posts in the ruling communist party last September.

The leader, who suffered a stroke in August 2008, has been grooming his Swiss-educated son as eventual successor in an attempt to extend the family dynasty into a third generation.

Kim Jong-Il took over in the late 1990s from his father and founding president Kim Il-Sung, who built the dynasty that has ruled the impoverished country with an iron first for more than six decades.

Jong-Un, known to be expanding his role in policy-making, has not yet been spotted accompanying his father to diplomatic trips overseas including the leader’s surprise visit to China in May.

The visit to Russia comes at a sensitive time for the two countries. Russia is heading into crucial presidential polls in 2012, in which the big unknown is whether Medvedev or former president and current Prime Minister Vladimir Putin will run.