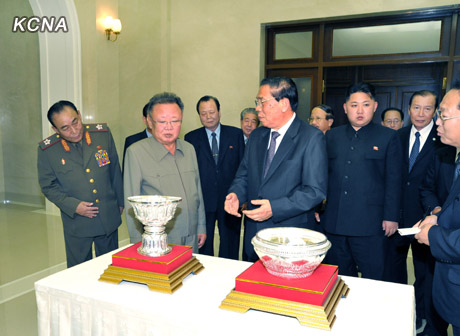 Kim Yong Nam made a speech at the reception.

He said the Lao president’s DPRK visit marked a very important occasion in boosting the unity and friendly and cooperative relations between the two parties and peoples which were forged in the common struggle for socialism against imperialism.

He went on: The friendly and cooperative relations between the two parties and peoples provided by the leaders of the elder generation have grown stronger under the deep care of leader Kim Jong Il and Choummaly Sayasone.

The WPK and the DPRK government will make positive efforts to constantly develop the friendship and cooperation with the LPRP and the people of Laos in the road towards socialism against imperialism.

Choummaly Sayasone, speaking next, highly estimated with pleasure that the fraternal Korean people are registering great achievements in the drive for achieving the prosperity of the socialist country and improving the standard of people’s living following the juche idea and the songun idea under the banner of self-reliance under the leadership of the Workers’ Party of Korea headed by Kim Jong Il, holding President Kim Il Sung, the eternal leader.

He was convinced that the fraternal Korean people would make greater successes in building a thriving socialist nation and accomplishing the cause of national reunification on the principles of independence, peace and great national unity.

He expressed deep thanks to the fraternal party, government and people of the DPRK for having rendered precious cooperation to the struggle of the Lao people for national salvation in the past and their national defence and construction at present on behalf of the Lao party, state and people.

We will in the future, too, defend and strengthen the traditional friendly and cooperative relations, the good and precious heritages, which were provided by Kaysone Phomvihane, president of the Lao people and Kim Il Sung, the great leader of the Korean people, and have been carried and expanded by the leaders of the new generation, he stressed.

Visiting Laotian President Choummaly Saygnasone (L), escorted by Kim Yong-nam, president of the Presidium of North Korea's Supreme People's Assembly, inspects an honor guard after arriving at the airport in Pyongyang on Sept. 21. The (North) Korean Central News Agency released the photo on Sept. 22 without elaborating on his itinerary. (Photo: KCNA-Yonhap)

Sayasone’s arrival in the DPRK was greeted with editorials in Rodong Sinmun and Minju Choson.  KCNA also published a biographical profile on Sayasone, which in part read:

He received military and politico-theoretical education in Vietnam and the former Soviet Union.

He was a political commissar of a battalion and battalion commander, chief of staff and commander of the force stationed in Xiengkhouang area, the liberation area from 1962 to 1975.

He worked as director of the Combat Department of the Lao Ministry of Defence and deputy chief of the General Staff of the Lao People’s Army and vice-minister of Defence from 1976.

He was elected vice-president of the Lao People’s Democratic Republic in 2001.

Sayasone led one of several delegations visiting Pyongyang this week.  Sayasone arrived on the same day as a delegation of ROK religious leaders.  On 20 September a number of foreign academics (primarily from China and Russia) arrived in the DPRK for a symposium held to commemorate the 65th anniversary of Kim Il Sung University.  A delegation from The Netherlands led by Ambassador Paul Alex Mankveld arrived on 21 September.  Mankveld attended an event commemorating the 10-year anniversary of NL-DPRK diplomatic relations.

One comment on “Kim Jong Il Meets with Laos President”