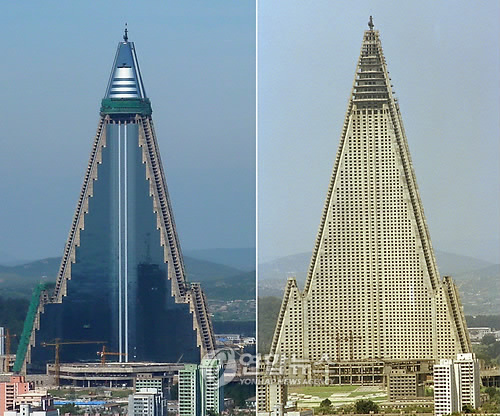 25 years after ground was broken, part of the Ryugyong Hotel is scheduled to open by April 2012 when the DPRK commemorates the 100th anniversary of Kim Il Sung’s birth.  Yonhap reports that interior construction and finishing work is proceeding so that the Ryugyong’s 1st through 25th floors will be ready for occupancy by April 2012.  The DPRK plans initially plans to house European companies and international organizations on the completed levels of the 105-story structure.  Located in the Pot’ong River City District (Pot’onggang-kuyok), construction on the Ryugyong began in 1987.  It was developed in a joint venture between Paektusan Architecture and Engineering in cooperation with a French construction company.  In addition to hotel rooms, the Ryugyong was intended to have revolving restaurants, a bowling alley and night club, as well as its own medical clinic.  There were several attempts to market the space to foreign investors which included allowing the operation of hostess lounges on the premises.  By 1992, construction of the Ryugyong ceased. 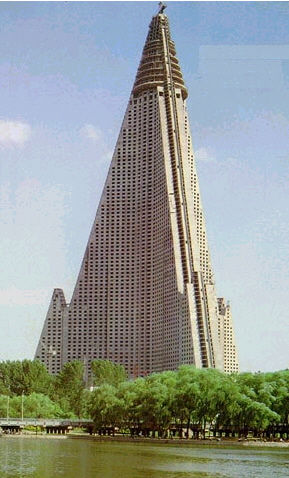 The Ryugyong Hotel prior to the resumption of construction

For 16 years the Ryugyong stood as a vacant concrete shell with a solitary tower crane at its pinnacle.  The lack of activity at the site did not stop other projects from taking place nearby.  In 1993 the Monument to the Fatherland Liberation (Korean) War was officially dedicated, located 1/3 of a mile (.54 km) north of the Ryugyong.  During 2000-2003 the Chung Ju-yung Indoor Stadium, which abuts the Ryugyong site, was constructed and dedicated.  In 2008 the DPRK completed an agreement with the Orascom conglomerate which included the completion of the Ryugyong.  The building was the focal point of a fireworks display held to celebrate International Labor Day (May Day) in 2009 and has appeared on several occasions in DPRK media.  In April 2011 the construction site was visited by DPRK Premier Choe Yong Rim.

Flickr user Kernbeisser has a small gallery of ground imagery from different perspectives of the Ryugyong under different phases of construction which can be viewed here.

The construction site of the Ryugyong Hotel in 2009 (Photo: Google image) 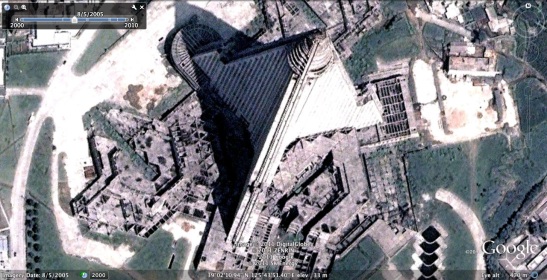 The unfinished Ryugyong Hotel, prior to construction resuming in 2008 (Photo: Google image)

3 comments on “Ryugyong Hotel to Partially Open by April 2012”