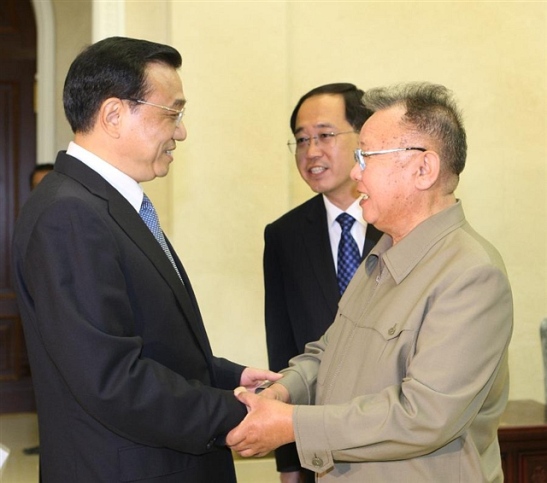 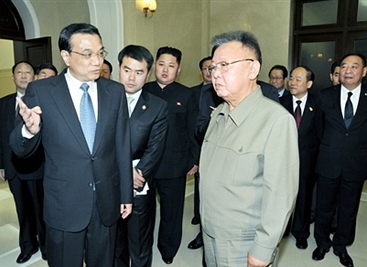 A decorative panel, among the gifts presented to Kim Jong Il, by the Chinese delegation during their visit during 24-25 October 2011 (Photo: KCNA)

Chinese Vice Premier Le Keqiang toasts with Kim Jong Il during a banquet he hosted for the Chinese delegation(Photo: KCNA)

On Monday (24 October), Le visited the Friendship Tower where he placed a wreath and signed the guest book.  He also toured a Chinese language class and the e-library at Kim Il Sung University.  KCNA reports:

After the DPRK military band played the national anthems of both countries, Li entered the tower where he skimmed through the martyrs’ book, watched the wall paintings describing how the Chinese volunteers joined the war and helped the DPRK people with construction.

Li said during the visit that peace does not come easily, so the achievements of construction should be treasured even more.

As a symbol of China-DPRK friendship, the Friendship Tower was completed in 1959.

Also on Monday, Li visited Kim Il Sung University where he observed Chinese-language studies and chatted with teachers and students.

Li said the future of the China-DPRK ties depends on the youths of both countries, encouraging DPRK students to promote cooperation between the two countries and pass down China-DPRK friendship from generation to generation.

Li toured the e-library of the university and donated education facilities and books. He arrived here on Sunday for an official goodwill visit to the DPRK

Le’s visit to Pyongyang, which will be followed by a trip ROK during 26 to 27 October, occurred amid other activities and events between the DPRK and PRC.  On 21 October (Friday) the P’ibada opera troupe departed to Beijing for a three month tour through China of its production Butterfly Lovers (Liang Shanbo and Zhu Yingtai).  A delegation of Chinese media officials visited the DPRK at the beginning of the month for five (5) days and  (collectively?) commented they “were deeply moved by the profound friendship between China and the DPRK sealed with blood.”  On 18 October, Chinese press reported that officials of its Railways Bureau completed an inspection of the China-DPRK Friendship Bridge, which links Dandong to Sinuiju, North Pyongan.  The month-long inspection found the 70-year bridge safe for traffic.  PRC Ambassador to the DPRK, Liu Hongcai, along with his wife and embassy officials, took part in crop harvesting at the DPRK-China T’aegam Friendship Farm in Sunan District in Pyongyang on 13 October.  On Saturday, Liu told Xinhua:

He pointed out that the economic and trade cooperation between the two countries has shown great potential, with bilateral trade and investment volume reaching new highs.

The bilateral trade volume was 3.1 billion U.S. dollars in the first seven months of this year, registering a year-on-year increase of 87 percent, the ambassador said.

Liu stressed that the DPRK’s increased emphasis on economic development and improving people’s living standard is broadening its foreign economic cooperation and attracting more Chinese enterprises to do business and invest in the country.

Liu expressed his belief that Chinese Vice Premier Li’s upcoming visit will further strengthen political mutual trust between the two countries, deepen the bilateral economic and trade cooperation, help promote the China-DPRK friendship and cooperation to a higher level, and make positive contribution to the maintenance and promotion of regional peace and stability.

The DPRK has not restricted its external contacts to the Chinese.  In Bangkok, Thailand, US and DPRK officials agreed on the resumption of recovery missions of US service members killed during active hostilities of the Korean (Fatherland Liberation) War.  In Geneva, the US and DPRK concluded its two-day interaction.  Neither a significant breakthrough nor announcement was expected, but outgoing special envoy Stephen Bosworth said the two countries “narrowed our differences.”  Heading the DPRK’s delegation in Switzerland was senior (first) vice minister of foreign affairs, Kim Kye Gwan, distinctly not present in Pyongyang to participate in the meeting with a senior official from his country’s closest ally.  AFP reports:

The parties were able to narrow some differences, although more time was needed to reach an agreement, Stephen Bosworth, outgoing US special representative told reporters following the talks.

Bosworth noted that there remained sticking points, “not all of which can be overcome quickly.”

However, “I am confident that with continued efforts on both sides we can reach a reasonable basis of departure for formal negotiations for the return of the six party process,” he added.

Together with his successor Glyn Davies, Bosworth met the North Korean delegation led by first vice minister Kim Kye-Gwan over two days in Geneva. The meeting, which took place first at the US embassy on Monday, rotated to the North Korean mission on Tuesday.

It coincided with a visit by China’s vice premier Li Keqiang to Pyongyang, where he met North Korean leader Kim Jong-Il, according to Chinese state media.

Kim told Li that Pyongyang “hopes the six-party talks about the nuclear issue on the Korean peninsula should be restarted as soon as possible”, China’s official Xinhua news agency reported early Tuesday.

The “principle of simultaneous action” should apply, it quoted Kim as saying — a reiteration of the North’s stance that the negotiations should begin again without preconditions. 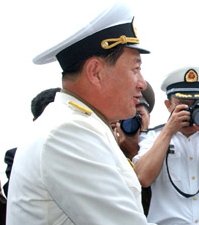 From Geneva, Kim Kye Gwan traveled to Moscow.  His arrival occurred a week following additional DPRK interactions with the Russian Federation.  On 20 October the KPA Navy’s commander of the East Sea (of Japan) fleet visited Vladivostok.  Senior Vice Admiral Kim Myong Sik met with senior officials of Russia’s Pacific Fleet, in addition to visiting other areas in the vicinity.  Kim’s meeting focused on finalizing preparations for a visit by a DPRK vessel to visit Vladivostok in November, as well as discussing a joint naval drill between the two countries.  In Pyongyang, Oleg Kozhemyako met with DPRK Premier Choe Yong Rim on 19 October (Wednesday) and attended a dinner with Kim Jong Il.

Kim Jong Il poses for a commemorative photo with a delegation from the Amur Region of Russia during their visit to the DPRK (Photo: KCNA)