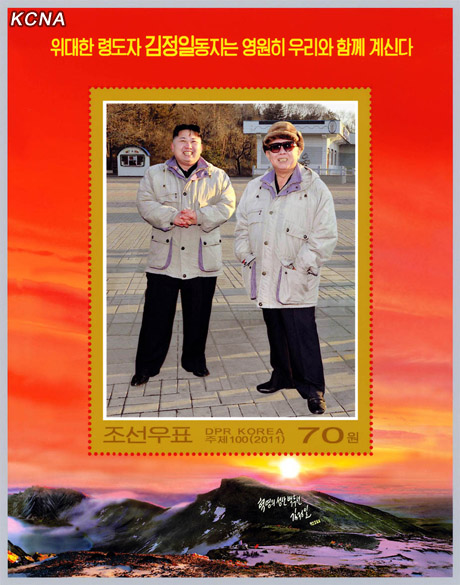 The DPRK government returned to work on 30 December (Friday), after the country finished a 10-day mourning period and funeral ceremonies for Kim Jong Il.  The government’s supreme policymaking organization, the National Defense Commission (formerly chaired by KJI), issued a statement thanking those who sent condolences, berating the ROK and South Korean officials and indicating, “the army and people of the DPRK [will] win the final victory…closely rallied behind the dear respected Kim Jong Un.”  The NDC statement also reiterated previous rhetoric from May 2011 that the country “will never deal” with the current leadership in ROK.  KCNA reports:

We feel grateful to the heads of state and party leaders, governments, organizations and personages of many countries of the world and compatriots at home and abroad for expressing profound condolences, sharing sorrow with us, and sending sincere sympathy and encouragement during the mourning period. We will never forget them.

When the whole nation is overcome with grief over the great loss, only the south Korean puppet group committed thrice-cursed crimes.

The DPRK National Defence Commission, above all, discloses before the world and the nation the truth about those crimes of the south Korean puppet group.

Though the country remains divided into the north and the south due to foreign forces, we are one nation.

The army and people of the DPRK, though suffering pain resulting from the division, have valued this homogenous nation more than anything else, always regarding as their faith the truth that the nation is above the ideology and system.

But this time the south Korean puppet group perpetrated such rash act as hurting the grief-stricken compatriots and rubbing salt into their wounds, determined to stop remaining as part of the nation of its own accord.

No sooner had the important report of the DPRK been released than the south Korean puppet group convened an emergency “state security meeting” and “state affairs meeting” and put even overseas missions on emergency alert duty, kicking off rackets to create the impression that a “contingency” was created as expected, and a “golden opportunity” presented itself to lead the north to “system change”.

The south Korean authorities put the three services of the puppet army on an emergency alert and ordered them to adopt combat posture, creating a war-like atmosphere on the ground and in the seas and air. They let over 30 right-wing conservative reactionary organizations flock to the forefront areas to scatter anti-DPRK leaflets whose content was hurting the dignity of the supreme leadership of the DPRK and inciting disturbance.

He sought to attain his foolish goal by taking the advantage of the mourning period, and if that fails, to lead the DPRK to “contingency” and “change of system”.

From the olden times, it was considered inhumane to raise one’s fist at the neighbor visited by misfortune and seek profits.

Even a foreign country which has no diplomatic relations with the DPRK stopped the planned military exercises being considerate of the sorrow of the army and people of the DPRK and set a mourning period to express condolences. In the light of this, the traitorous group’s bullying acts can not but be viewed as one defying human ethics and morality.

Lee group’s stepped-up show of enmity toward the DPRK culminated in its act of blocking south Koreans who wanted to visit Pyongyang to mourn the demise of leader Kim Jong Il.

South Koreans from all walks of life upon the news of Kim Jong Il’s demise that came like a bolt from the blue strongly called for expressing condolences and dispatching mourners group regardless of whether they belonged to progressive or conservative camps and ruling or opposition parties.

The traitorous group of Lee turned down all the demands, describing south Koreans’ request to express condolences as “sympathy to north’s citizens separated from its regime”. It banned the dispatch of mourners’ group talking about “chaos of south Korean society”. It foolishly tried to estrange the popular masses of the DPRK from its headquarters on one hand and totally ban the Pyongyang visits much hoped by broad south Koreans by taking the measures of “selected visits” and “restricting mourners groups” on the other hand.

Expressing condolences and sending condolatory messages have been good manners and customs and ethical tradition peculiar to the Korean nation from the ancient times.

It is for this reason that we brand the evil act of the Lee group as treason bereft of elementary human reason and morality.

The group dared try to link the “final responsibility” for the warship “Cheonan” sinking and shelling on Yonphyong Island with the supreme leadership of the DPRK. They let loose such reckless remarks that the DPRK must present justifications for south Korea to move if it wants to have the “May 24 measure of the authorities” retracted and the north-south relations mended this time.

It is hideous crime that can never be pardoned in any case to dare hurt the dignity of the supreme leadership of the DPRK over its army’s self-defensive shell-firing on Yonphyong Island for coping with preemptive provocation in the wake of the “Cheonan” warship sinking case which is not related to the DPRK.

The group of traitors even hatched a plot to prompt the DPRK make a “change”, while talking about its non-existent “contingency” and “instability” of its dignified system and regime. This evildoing adds to the said crimes.

Upon joint authorization of the Party, state, army and people of the DPRK, the DPRK National Defence Commission clarifies the following principled stand on the group of traitors’ hideous crimes committed at the time of the great misfortune of the nation:

As already declared, the DPRK will have no dealings with the Lee Myung Bak group of traitors forever.

To keep company with them is a disgrace for the clear and honest-minded Korean nation as they are ignorant in politics, vulgar in morals and lack elementary human nature.

We will surely force the group of traitors to pay for its hideous crimes committed at the time of the great national misfortune.

The veritable sea of tears shed by the army and people of the DPRK will turn into that of retaliatory fire to burn all the group of traitors to the last one and their wailing into a roar of revenge to smash the stronghold of the puppet forces.

The conservative media of south Korea would also face due punishment as they are backing and following the group of traitors in its treacherous act against humanity through false report, fabrication, speculation and presumption, oblivious of their mission to be fair speaker for the public and pioneer of true public.

The south Korean puppets and world reactionaries should no longer make a fool of themselves in their bid to lead the DPRK to “contingency” and make its “system instable”, something unimaginable.

All the soldiers and people of the DPRK turned out to mourn the demise of leader Kim Jong Il since the announcement of his demise, an indication of the great unity of the party, army and people behind the headquarters of the revolution in single mind and invincibility of the Korean-style socialist system.

The army and people of the DPRK will unswervingly keep to the path of Juche indicated by Kim Jong Il true to the intention of President Kim Il Sung.

Taking this opportunity, we solemnly declare with confidence that the south Korean puppets and foolish politicians around the world should not expect any change from the DPRK.

The army and people of the DPRK will keep to the path of improving north-south relations and achieving peace and prosperity.

Mended north-south relations we want are not improvement based on “high-handedness” and “flexibility” as touted by Lee Myung Bak group of traitors or on crafty gimmick of those rhetorics.

The DPRK wants to improve relations with the south and bring peace and prosperity through the nationwide drive to implement the historic June 15 joint declaration and the October 4 declaration under the banner of independence, peace and reunification.

The world will see how the army and people of the DPRK win the final victory after turning their sorrow and tears into strength and courage, closely rallied behind the dear respected Kim Jong Un.

The title of “Hero of the Democratic People’s Republic of Korea (DPRK)” was awarded to late leader Kim Jong Il, the official KCNA announced Friday, citing a decree by the Presidium of the Supreme People’s Assembly on Dec. 19.

Kim Jong Il, general secretary of the Workers’ Party of Korea (WPK), chairman of the National Defense Commission of the DPRK and supreme commander of the Korean People’s Army, “performed undying revolutionary feats for the country and its people, the times and history,” said the decree.

“He developed in depth the Juche idea, the Songun idea founded by President Kim Il Sung,” and developed the WPK, army and state “shining with his immortal name and placed the country’s dignity and power onto the highest level,” said the KCNA, citing the decree.

True to the president’s last instructions for national reunification, the decree said that Kim Jong Il led all his countryfellows on the road of independence and great national unity and ushered in the June 15 era of reunification.

He contributed greatly to “achieving the victory of the socialist cause, world peace and stability, friendship and solidarity among peoples under the uplifted banner of independence against imperialism.”

Business at shops near the North Korean Embassy in Beijing picks up on Dec. 30, 2011, as North Korean officials and residents returned to Beijing from their home country after the Dec. 19-29 mourning period for late North Korean leader Kim Jong-il. (Photo: Yonhap)