On 13 February 2012, Jon Yong Jin presented his credentials to Cuban Vice President Gladys Bejerano (a.k.a. Gladys Maria Bejerano Portela).  For a number of years Jon served as vice chairman of the Committee for Cultural Relations with Foreign Countries, with a portfolio for science and technology.  According to ROK media Jon is a nephew of National Defense Commission Vice Chairman Jang Song Taek.  Jon was appointed DPRK Ambassador to Cuba by the Supreme People’s Assembly [SPA] Presidium in January 2012.  After presenting his letter, Jon met with Bejerano as well as Cuba’s Minister of Foreign Affairs, Bruno Rodriguez (a.k.a Bruno Eduardo Rodriguez Parrilla). 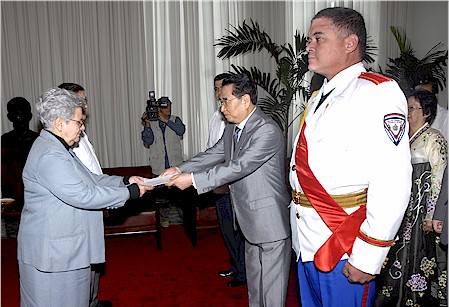 KCNA reported on 18 February on Jon’s arrival in Cuba:

Gladis Maria Bejerano Portela, vice-president of the Council of State of Cuba accepted credentials from Jon Yong Jin, DPRK ambassador to his country, on Feb. 13.

He said: I, on behalf of the Cuban party, government and people, express once again deep condolences over the demise of leader Kim Jong Il to our regret.

Kim Jong Il was a close friend of the Cuban people. He always paid deep attention to the steady development of the fraternal relations between Cuba and the DPRK.

We hope that the Korean people will register greater successes in the efforts to build a thriving socialist nation under the wise leadership of the dear respected Kim Jong Un.

The Cuban government will in the future, too, develop the friendly and cooperative relations in an overall way in all fields, cherishing deep the comradely obligation with the DPRK as intended by the supreme leaders of the two countries.

On 17 February 2012 Hyon Hak Bong presented his credentials to Queen Elizabeth II  (Photo here).  A former deputy director-general in the DPRK’s Foreign Ministry, Hyon was appointed DPRK Ambassador to the UK by the SPA Presidium in early December, prior to Kim Jong Il’s death.  According to the Court Circular: “His Excellency Mr. Hyon Hak Bong was received in audience by The Queen today and presented the Letters of Recall of his predecessor and his own Letters of Credence as Ambassador from the Democratic People’s Republic of Korea to the Court of St. James’s.  Mrs. Choe Jin Ok was also received by Her Majesty.”

Hyon Hak Bong, DPRK ambassador to the UK, on Feb. 17 presented his credentials to Elizabeth II, queen of the UK.

She wished the dear respected Kim Jong Un great success in his work to build a thriving nation and improve the standard of people’s living.

She hoped everything will go on well in the DPRK under the leadership of Kim Jong Un.

Noting that the bilateral relations have developed on good terms over the last ten odd years since diplomatic relations were established between the two countries, she hoped that the two governments would positively cooperate with each other in various fields.