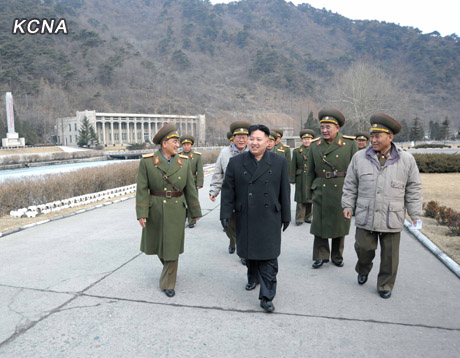 The Korea Committee for Space Technology reports in DPRK media that it officially notified several relevant international organizations of its intention to launch the Kwangmyo’ngso’ng-3.  KCNA reports:

The Korean Committee for Space Technology will invite experienced foreign experts on space science and technology and journalists to visit the Sohae Satellite Launching Station, the General Satellite Control and Command Centre and other places and observe its launch.

The U.S. Defense Department warned Friday that the launch of a long-range rocket would violate a series of UN resolutions and considered it as a “destabilizing behavior” to the Asia-Pacific region.

Pentagon spokesman John Kirby urged the DPRK leadership to “reconsider this decision and to conform to their obligations under those sanctions.”

“We continue to operate every day with our South Korean counterparts and we hold firmly to our alliance obligations and to security on the Korean Peninsula,” said Kirby.

He added that the Defense Department is “very comfortable with the full range of military capabilities we have at our disposal in the Asia Pacific region and in and around the Korean peninsula.”

The U.S. State Department also said the launch plan could jeopardize nascent efforts to restart nuclear negotiations with the DPRK and made it “very hard” to go forward with its planned food assistance to the DPRK.

“Were we to have the launch, it would create obviously tensions and that would make the implementation of any kind of nutritional agreement quite difficult,” State Department spokeswoman Victoria Nuland said, hinting that the DPRK’s latest move was “an abrogation of that agreement.”

According to a deal reached between Pyongyang and Washington in Beijing late last month, the United States agreed to provide 240,000 tons of food as aid to the DPRK in exchange for Pyongyang’s promise to impose a moratorium on nuclear tests and missile launches, and allow checks by international nuclear inspectors.

U.S. Secretary of State Hillary Clinton slammed the DPRK’s launch plan as “highly provocative,” warning that such a launch would pose a threat to regional security and would also be inconsistent with the DPRK’s recent undertaking to refrain from long-range missile launches.

Clinton urged the DPRK to “adhere to its international obligations, including all relevant UN Security Council resolutions,” adding that Washington is consulting closely with its international partners on the next steps.

Meanwhile, Russia said it was also seriously concerned about Pyongyang’s rocket launch plan, urging it not to proceed with it.

Russia’s foreign ministry called on the DPRK not to oppose itself to the international community, and create additional difficulties for restarting the six-party talks on the nuclear issue on the Korean Peninsula.

Moscow also said the resumption of the long-stalled talks and diplomatic solutions are the only viable option available to both terminate the nuclear problems in the region and to lift the UN sanctions against the country, which is prohibited from conducting launches that use ballistic missile technology.

The DPRK’s neighboring country South Korea Friday also voiced its “serious concern” over the plan, calling it a “grave provocation threatening the peace and security” on the Korean Peninsula as well as Northeast Asia.

The South Korean foreign ministry said it would work closely with related countries, including members of the six-party talks, to urge the DPRK to “immediately stop provocative act and abide by its international obligations.”

In a statement, the UN chief called on Pyongyang to fully comply with the UN resolutions that ban any launch using ballistic missile technology.

China has also voiced its concern over the DPRK’s satellite launch plan.

Chinese Vice Foreign Minister Zhang Zhijun, in a meeting with the DPRK Ambassador to China Ji Jae Ryong on Friday, expressed China’s worry over the matter, according to a statement from the Chinese Foreign Ministry.

Zhang exchanged views with Ji on China-DPRK ties and the situation on the Korean Peninsula, said the statement.

Zhang said China had taken note of the DPRK’s satellite plan as well as the reaction from the international community. China believes it is the common obligation and in common interests of all parties concerned to maintain the peace and stability of the Korean Peninsula and Northeast Asia, said the statement.

“We sincerely hope parties concerned stay calm and exercise restraint and avoid escalation of tension that may lead to a more complicated situation,” Zhang was quoted as saying.

On April 5, 2009, the DPRK conducted a similar launch, which, according to the country’s official KCNA news agency, successfully put a “Kwangmyongsong-2” communications satellite into orbit. But some countries, including South Korea, Russia and the United States, believed the launch was a failure. The launch brought about criticism and tightened sanctions on the DPRK.

The DPRK insists its satellite launches are for peaceful and scientific purposes. The KCNA said in a report on Friday that the upcoming launch would greatly encourage the army and people of the DPRK in the building of a thriving nation and will offer an important occasion of putting the country’s technology of space use “for peaceful purposes on a higher stage.”