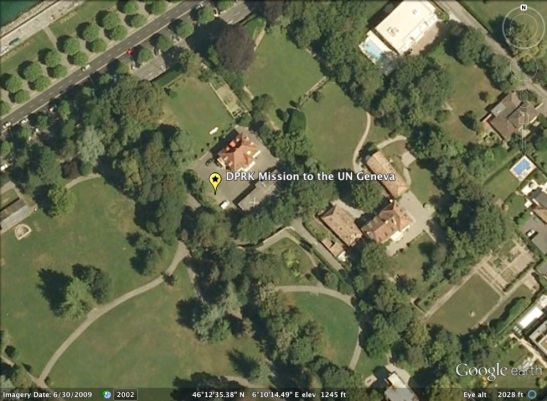 KCNA English published a commentary on heated interaction between a group of South Korean elected officials and the DPRK Ambassador to the UN Mission in Geneva on 12 March at a session of the UN Human Right Council on 12 March.  This was not the first DPRK media mention of the incident;  Urminzokkiri (Urminjokkkiri) said in part that “it was a huge disgrace shown right in front of the world and an ugly political conduct by political gangsters and first-class rogues.”  KCNA commented:

South Korean lawmakers who were represented at a session of the UN Human Rights Council in Geneva on March 12 behaved rudely to the DPRK ambassador at UN after he finished his speech.

Irony is that the puppets, who were taken into custody for throwing the conference hall into chaos, held a press conference after their release and protested the UN, demanding “apology.”

This reminds one of a thief crying “Stop the thief!”

They might have mistaken the international conference for National Assembly session in Seoul often locked in free-for-all.

It is well known to the world that south Korean lawmakers use their fists, feet and even their bodies against their rival lawmakers. Their rude behavior at the international meeting can be interpreted as a continuation of their habit.

What is ill-boding is that the puppets took the issue of illegal trespassers up for discussion at the international meeting, turning the conference hall into a theater of rowdyism.

This is part of the vicious anti-DPRK smear campaign and foolish provocation aimed to tarnish the dignity and international prestige of the DPRK.

Through this, the group of traitors intends to default even its master as well as the neighboring country, and make the evil cycle of confrontation and conflicts repeat on the Korean Peninsula and the region. But this is a last-ditch effort and a pie in the sky.

Much upset by the army and people of the DPRK dynamically advancing, rallied around their leader in single mind, the puppets are trying hard like a drowning man catching at a straw.

The Lee Myung Bak group has gone so wretched as to let even National Assemblymen orchestrate the free-for-all on the international arena.

The group had better mind its own fate at death-bed.

One comment on “DPRK Media Comments on UNHRC Scuffle”