Ireland hopes for boosting the friendly and cooperative relations with the DPRK in the political, economic, cultural and other fields, said the president of the Republic of Ireland on March 14.

Micheal Higgins made the remark when he was presented with credentials from Hyon Hak Bong, DPRK ambassador to the country.

The friendly and cooperative relations between Ireland and the DPRK are developing on good terms in various fields after the establishment of diplomatic relations, the president said.

The president wished the dear respected Kim Jong Un great success in his work for developing the country’s economy and improving the standard of people’s living. 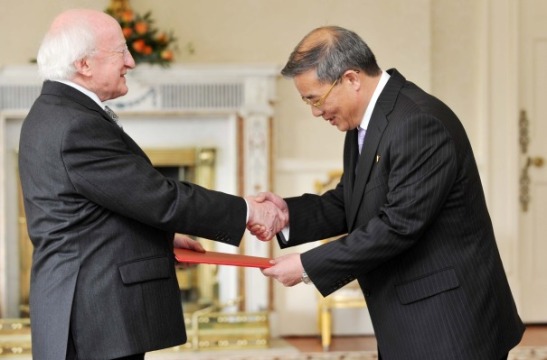 Three news ambassadors have presented their credentials to President Michael D Higgins at Áras an Uachtaráin.

The new ambassadors for Mozambique, North Korea and Lao attended the ceremony this morning along with some family members and officials from their embassies.

The government was represented at the ceremony by Joe Costello, who is Minister of State for trade and development at the Department of Foreign Affairs.

The ambassadors received an army escort of honour as they were driven to and from the Áras, consisting of a motorcycle detachment from the 2nd Cavalry Squadron from Cathal Brugha Barracks.

The guard of honour outside the Áras was given by soldiers from the 1 Southern Brigade, 4th Infantry Battalion from Collins Barracks in Cork under the command of Lieutenant Ruairi O’Connor.