The meetings discussed the election of delegates to the WPK Conference.

Addresses on electing the dear respected Kim Jong Un, the supreme leader of the WPK and the Korean people, as a delegate to the WPK Conference were made at the meetings.

The addresses said that Kim Jong Il defended the socialist country and laid the foundation for the happy life of the Korean people while hewing the untrodden difficult path in the van with his iron will and superhuman energy.

The addresses praised him as the great statesman who is wisely leading the revolution and construction as a whole with his tested leadership and the general of Mt. Paektu style who is making the DPRK shed its rays as a military power, possessed of the distinguished quality and trait and organizational ability that no one can match.

The addresses courteously proposed to elect him as a delegate to the WPK Conference, representing the unanimous will and desire of all the party members and other people in the provinces and the city.

At the meetings speakers fully supported and approved the proposal on electing him as a delegate to the WPK Conference.

The meetings unanimously adopted decisions on electing him as a delegate to the WPK Conference.

The meetings elected delegates to the WPK Conference. 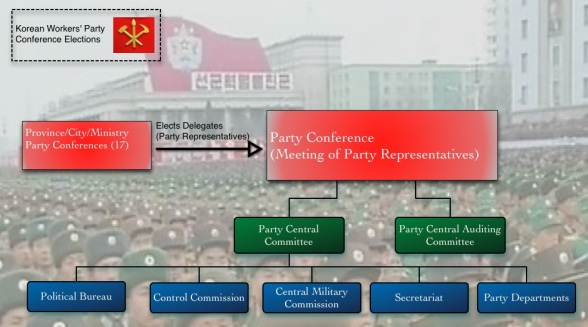 After a series of party meetings countrywide, North Korea has elected new leader Kim Jong-un as a delegate to this month’s ruling party conference, the North’s state media said Sunday, in a move seen by outside analysts as another effort to consolidate Kim’s grip on power.

The North’s ruling Workers’ Party of Korea (WPK) plans to hold a special session on April 13 and is expected to appoint the young Kim, believed to be in his late 20s, to the post of general secretary of the party. The same post was held by his late father Kim Jong-il.

The young leader became supreme commander of the North’s 1.1 million-strong military shortly after his father’s death in December, as he progressively takes more control of the communist country.

Announcing Kim as a WPK delegate, representatives “praised him as the great statesman who is wisely leading the revolution and construction as a whole with his tested leadership,” according to an English-language report by the Korean Central News Agency.

Ahead of the upcoming special session, the party meetings represented “the unanimous will and desire of all the party members and other people,” the report continued.

North Korea is preparing a grandiose celebration of the 100th anniversary of the birth of late founding leader Kim Il-sung, grandfather of Kim Jong-un, on April 15.

In the first international conflict since the death of Kim Jong-il, North Korea has vowed to press ahead with a plan to launch a long-range rocket, ostensibly to put a satellite into orbit, between April 12 and 16, rebuffing a chorus of international warnings.

South Korea, the United States and Japan have demanded North Korea call off the planned launch, warning it would violate a U.N. resolution that bans any ballistic missile tests by the communist country.

North Korea has refused to budge, arguing that it has a sovereign right to fire the rocket as part of its “peaceful” exploration of the space.