The Window is Open

The Korea Committee for Space Technology informed invited journalists and DPRK state media that its technicians began injecting fuel into the U’nha-3 carrier rocket.  The first day, of a five-day period in which the DPRK informed international regulatory agencies it would launch the rocket and its reported payload Kwangmyo’ngso’ng-3 [KMS-3] , has passed.  Interfax and ITAR-TASS reported on 11 April that U’nha-3 would be launched on 14 April, one day ahead of the 100th anniversary of the birth the late DPRK President and founder, Kim Il Sung.  The James Martin Center for Nonproliferation Studies has produced an FAQ on the U’nha-3 launch.

The morning timeframe in which North Korea plans to launch its 30-metre (100-foot) rocket came and went with no sign of liftoff from a newly built space centre on the country’s northwestern Yellow Sea coast.

But the North says the Unha-3 (Galaxy-3) rocket, ostensibly carrying a satellite payload, could go up any day between now and Monday to coincide with Sunday’s centenary of the birth of its founding leader Kim Il-Sung.

North Korea is now led by a third generation of the Kim dynasty in the youthful form of Kim Jong-Un, who has been awarded an array of titles including on Wednesday chairman of the all-powerful Central Military Commission.

Fighter jets were heard roaring across Pyongyang’s overcast skies early Thursday as the showcase capital stepped up preparations for mass festivities on Sunday to mark the 100th anniversary.

North Korea says its rocket launch is not a banned missile test and that it has every right to send the satellite up, as it promotes the untested leadership of Jong-Un, who succeeded his late father Kim Jong-Il in December.

Lee Yun-Keol, a high-ranking North Korean defector who now heads a think-tank in Seoul, told AFP that he had obtained Kim Jong-Il’s last will and testament, which urged the state to develop weapons of mass destruction.

Excerpts of the will were published by Japanese weekly magazine Shukan Bunshun based on the document provided by Lee, who worked for North Korea’s bodyguard bureau, the organisation in charge of protecting the Kim family.

“Keep in mind that constantly developing and keeping nuclear (weapons), long-range missiles and biochemical weapons is the way to keep peace on the Korean peninsula, and never drop your guard,” the will purportedly said.

“We have to win the psychological war with the United States. By standing up imposingly as a legitimate nuclear power, we have to weaken American influence in the Korean peninsula and work toward lifting international sanctions to prepare external conditions for economic development,” it added.

North Korea says it has invited between 150 and 200 foreign journalists to watch the rocket launch and the weekend commemorations, the largest number of overseas media ever welcomed in to the reclusive state.

Over the past year’s time, little-noticed public statements by American officials and a series of oblique references in the North Korean state media have telegraphed the appearance of the new weapon system. Regardless, in the absence of a flight test, a televised display, or a statement by American officials judging the missile to have been deployed, the emerging ICBM force has yet to enter the public consciousness.

Certainly, North Korea’s progress comes as a surprise, even to those who track these matters closely. The decisions of about a decade ago to withdraw from the Anti-Ballistic Missile (ABM) Treaty and to deploy the Ground-based Midcourse Defense System were premised on the eventual emergence of North Korean (and Iranian) ICBMs. But even as late as March 2009, just prior to North Korea’s last space-launch attempt, then-Secretary of Defense Robert Gates was still downplaying Pyongyang’s ability to build weapons that can hurdle the Pacific.

Calling the upcoming rocket launch “a mask for the development of an intercontinental ballistic missile,” Gates told Chris Wallace of Fox News that fielding nuclear-armed missiles was North Korea’s “long-term intent,” not a near-term prospect.

The February 2010 report of the US Department of Defense’s Ballistic Missile Defense Review took a similar view, treating North Korean ICBM development as somewhat uncertain in its progress. “Although the test launches of the TD-2 [Taepodong-2] in 2006 and 2009 were deemed unsuccessful,” the report concluded, “we must assume that sooner or later North Korea will have a successful test of its TD-2 and, if there are no major changes in its national security strategy in the next decade, it will be able to mate a nuclear warhead to a proven delivery system.”

A view of Sanum-dong on the outskirts of Pyongyang (Photo: Google image)

North Korea announced on Tuesday, April 10, that it had completed preparations for this week’s satellite launch and a day later started fueling for a test that the United States says raises questions about Pyongyang’s desire to improve relations with the rest of the world. But more worryingly, Pyongyang also announced that it had begun a five-year program to develop even larger rockets, which could function as intercontinental ballistic missiles (ICBMs) potentially able to reach the continental United States.

Earlier this month, a South Korean newspaper reported an unconfirmed claim that a U.S. reconnaissance satellite had spotted a new North Korean rocket, probably at the Sanum Dong research and development facility in Pyongyang, where other long-range systems have been observed in the past. According to this report and others that seem to substantiate the North’s claims, this new 40 meter missile is 25 percent longer and has a larger booster than the Unha-3 rocket scheduled for launch this week. Whether this system is functional or a life-size mock-up remains unclear. While impossible to confirm, analyzing satellite images and photographs of the new launch facility, as well as displays at a museum in Pyongyang, seem to suggest that North Korea is developing an intercontinental ballistic missile with longer range and greater capabilities than the one scheduled for testing this week. And there’s a chance that this new, more threatening missile might even be on display in Pyongyang soon, for either the April 15 centenary parade for the late Kim Il Sung or the April 25 military founding day parade. 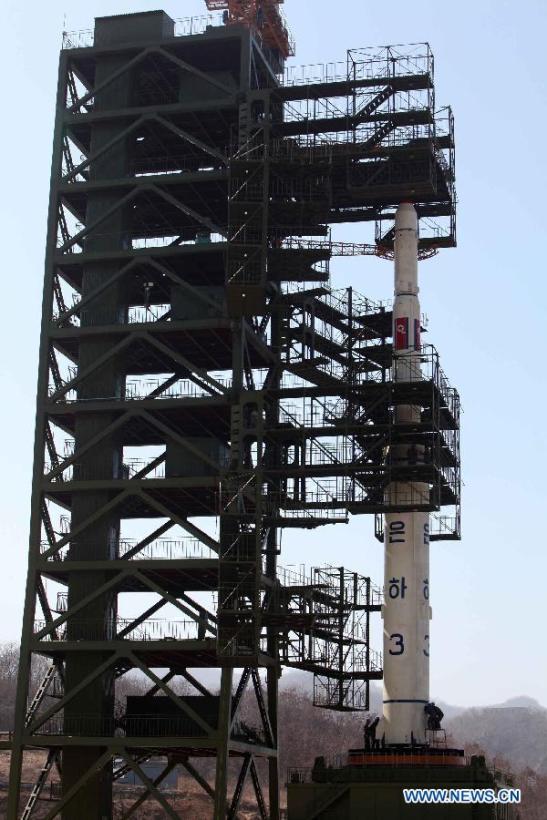 This entry was posted on 04/12/2012 by nkleadershipwatch in Uncategorized.