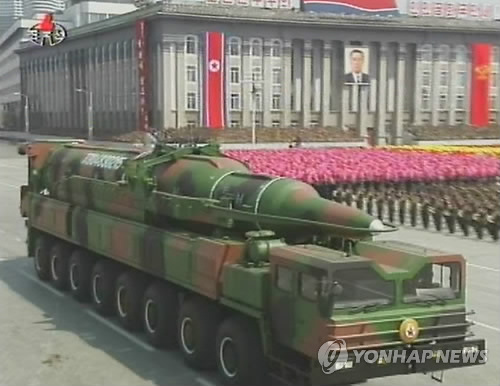 With reports that it retracted an invitation to the IAEA, the DPRK’s Foreign Ministry released a statement on 17 April (Tuesday) which defended its launch of the U’nha-3 rocket.  It also said the country would not “be bound” to the 29 February “Leap Day Deal” it made with the United States.   The statement was a direct response to a 16 April 2012 United Nations Security Council [UNSC] presidential statement which characterized the launch as a violation of existing UN sanctions.  Unlike other statements from the DPRK Foreign Ministry did not contain any overt threats and minimized nuclear and ballistic invocations.  KCNA reports:

The U.S. and its followers committed a hostile act of violating the DPRK’s right to satellite launch by abusing the United Nations Security Council again.

On April 16 the UNSC issued a statement of its chairman “condemning” the DPRK’s satellite launch for peaceful purposes.

The DPRK took steps to show the sincerity and transparency of the satellite launch for peaceful purposes to the maximum from A to Z as an exception and aroused sympathy of broad world public.

The U.S., finding it hard to conceal the truth, after hatching all sorts of dastardly trick to prevent the peaceful nature of the DPRK’s satellite launch from being confirmed objectively and persistently term it a long-range missile launch, imposed upon the UNSC its brigandish demand that the DPRK should not be allowed to launch even a satellite for peaceful purposes.

The UNSC has been abused under the pressure of high-handed and arbitrary practices of the U.S. and its catastrophic consequences have been felt still today in various parts of the world.

UNSC resolutions 1718 and 1874 which the hostile forces regard as the “ground” to take issue with the DPRK’s satellite launch are a product of their high-handed policy for antagonizing and oppressing the DPRK and the height of illegality they faked up at random, disregarding even universally accepted international law.

It is the brigandish essence of these resolutions that those countries which refuse to meekly obey the U.S. should not be allowed to develop their national defence capability and to this end they should be deprived of even their right to launch satellites for peaceful purposes.

Such unreasonable double standards are possible at the UNSC because such standards are in line with the interests of those countries keen to monopolize such cutting-edge technology as satellite launch.

The present developments clearly show that the principle of equality as regards sovereignty clarified in the UN Charter is a mere high-sounding word and justice should be protected by one’s own efforts.

The DPRK Foreign Ministry declares as follows in connection with the grave infringement upon the right of the sovereign state to launch satellites for peaceful purposes:

Firstly, we resolutely and totally reject the unreasonable behavior of the UNSC to violate the DPRK’s legitimate right to launch satellites.

It is the unshakable principle of the army and people of the DPRK not to tolerate even the slightest element to deride and encroach upon the dignity of the nation and the sovereignty of the country.

Secondly, we will continue exercising the independent right to use space recognized by the universally accepted international laws which are above the UNSC resolutions.

Nothing can stand in the way of the DPRK’s space development for peaceful purposes.

Thirdly, as the U.S. violated the Feb. 29 DPRK-U.S. agreement through its undisguised hostile acts, we will no longer be bound to it.

We have repeatedly clarified from the outset that we will sincerely implement the Feb. 29 agreement to the last and took practical steps to implement it as the satellite launch for peaceful purposes is an issue quite different from the agreement.

No sooner had the DPRK’s plan for satellite launch been announced than the U.S. suspended the process for the provision of food pursuant to the DPRK-U.S. agreement under that pretext. This time, the U.S. spearheaded the hostile act of encroaching upon the DPRK’s legitimate right to launch satellites by abusing the position as chairman of the UNSC.

The U.S. finally reneged on its promise that “it respects the sovereignty of the DPRK and has no hostile intent toward it” in practice, totally violating the Feb. 29 agreement.

We have thus become able to take necessary retaliatory measures, free from the agreement. The U.S. will be held wholly accountable for all the ensuing consequences.

Peace is very dear for us but the dignity of the nation and the sovereignty of the country are dearer for us.

3. The Security Council deplores that such a launch has caused grave security concerns in the region.

4. The Security Council demands that the DPRK not proceed with any further launches using ballistic missile technology and comply with resolutions 1718 (2006) and 1874 (2009) by suspending all activities related to its ballistic missile program and in this context reestablish its preexisting commitments to a moratorium on missile launches.

6. The Security Council further agrees that, if the Committee has not acted pursuant to the paragraph above within fifteen days, then the Security Council will complete action to adjust these measures within an additional five days.

7. The Security Council demands that the DPRK immediately comply fully with its obligations under Security Council resolutions 1718 (2006) and 1874 (2009), including that it: abandon all nuclear weapons and existing nuclear programs in a complete, verifiable and irreversible manner; immediately cease all related activities; and not conduct any further launches that use ballistic missile technology, nuclear tests or any further provocation.

9. The Security Council expresses its determination to take action accordingly in the event of a further DPRK launch or nuclear test.