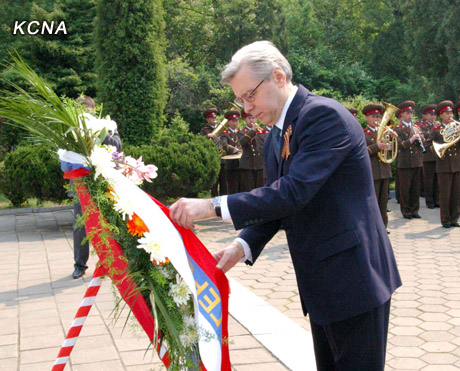 DPRK state media reported on 9 May (Wednesday) that newly appointed Russian Federation Ambassador to DPRK Alexandr Timonin, joined by other Pyongyang-based diplomats and Russians residing in the DPRK, visited the Liberation Tower on the anniversary of the end of the Great Patriotic War (the end of the Second World War in Europe).  Ambassador Timonin also delivered a floral wreath and visited a cemetery for Soviet soldiers killed in Korea during 1945-46.  KCNA reports:

Members of the Russian embassy here laid a wreath at the Liberation Tower on the occasion of the 67th anniversary of the great Patriotic War of Russia on May 9.

Present there were Alexandr Timonin, Russian ambassador, members of his embassy, diplomatic envoys of foreign embassies and the military attaches here.

They laid a wreath in the name of the embassy before paying a silent tribute to the memory of the fallen fighters of the Soviet army.

They laid a wreath and bunches of flowers at the cemetery of the fallen fighters of the Soviet Army in Sadong district, Pyongyang city.

Earlier, they laid bunches of flowers at the liberation towers, statues and cemeteries of the fallen fighters of the Soviet Army in local areas.