DPRK state media reported that an opening ceremony was held in Pyongyang on 20 June (Wednesday) to open the Ch’angjon Street Apartment Complex located in the city center.  Members of the central leadership attending the ceremony included Kim Yong Nam, Choe Yong Rim, Mun Kyong Dok, Choe Tae Bok, VMar Choe Ryong Hae, VMar Kim Jong Gak, Kim Ki Nam, Yang Hyong Sop and Ro Tu Chol.  During the ceremony Kim Yong Nam read a joint congratulatory message from the Korean Workers’ Party [KWP] Central Committee and National Defense Commission [NDC].  According to KCNA the message “noted with high appreciation that all of them [construction workers] successfully implemented the behests of leader Kim Jong Il by dedicating their wisdom and enthusiasm to the project with intense loyalty.”  DPRK Premier Choe Yong Rim delivered the ceremony’s keynote address in which he, according to KCNA, “called upon the builders and officials to further glorify the heyday of Pyongyang in the military-first (songun) era through their energetic effort to turn into a more magnificent and fashionable world class city.” 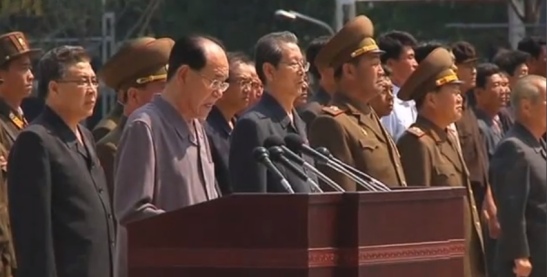 A view of the crowd attending the opening ceremony of an apartment complex in central Pyongyang on 20 June 2012 (Photo: Rodong Sinmun)

The Ch’angjon Street Apartment Complex, which also includes shops, restaurants, schools and a childcare facility, was scheduled to open for the 100th anniversary of Kim Il Sung’s birth in April 2012.  Construction was delayed after Kim Jong Il’s death in December 2011, although KCNA reported that work continued whilst plans for KJI’s funeral were being finalized.  There were also numerous reports that DPRK universities were ordered to cancel classes in the spring of 2011.  University students were mobilized to perform basic tasks on several large construction projects, including Hu’ich’o’n Power Station and the Ch’angjon Street Apartment Complex.

The construction of Changjon Street in Pyongyang has been successfully completed.

The street stretches along the bank of the River Taedong from Mansu Hill where the statues of President Kim Il Sung and leader Kim Jong Il stand. There are in the street the People’s Theatre, skyscrapers and multi-storied apartment houses and various welfare and service facilities. All of them were put on the basis of formative art and they are enclosed in a beautiful park.

The Mansudae area has all elements of architectural style and the layout of the street. Service personnel and other people of the DPRK successfully built this street in a matter of one year.

A ceremony for the completion of the street construction took place on Wednesday.

Present there were Kim Yong Nam, Choe Yong Rim, Choe Ryong Hae and other senior party, state and army officials and members of the Cabinet, officials in construction units, builders and Pyongyangites who are expected to move to new flats.

Read out at the ceremony was a joint congratulatory message of the Central Committee of the Workers’ Party of Korea and the DPRK National Defence Commission to service personnel of the Korean People’s Army, builders of the capital city, shock brigaders and helpers who performed shinning labor feats in building the street.

The message said that all the builders of Changjon Street who devoted all their energies and wisdom to the gigantic project for materializing the WPK’s grandiose plan for capital construction are, indeed, standard-bearers in building a thriving nation, heroes in the era of songun and genuine patriots.

It noted with high appreciation that all of them successfully implemented the behests of leader Kim Jong Il by dedicating all their wisdom and enthusiasm to the project with intense loyalty to their party and leader and strong sense of moral obligation.

DPRK Premier Choe Yong Rim, member of the Presidium of the Political Bureau of the C.C., the Workers’ Party of Korea, said in his address at the ceremony that the builders of Changjon Street completed the construction of modern buildings and thus put into practice leader Kim Jong Il and the dear respected Kim Jong Un’s noble patriotism and high intention of their love for the people, adding that these heroic feats would go down in the country’s history along with a thriving nation.

He also called upon the builders and officials to further glorify the heyday of Pyongyang in the era of songun through their energetic effort to turn it into a more magnificent and fashionable world class city.

At the end of the ceremony, leading party, state and army officials looked round apartment houses in the street. 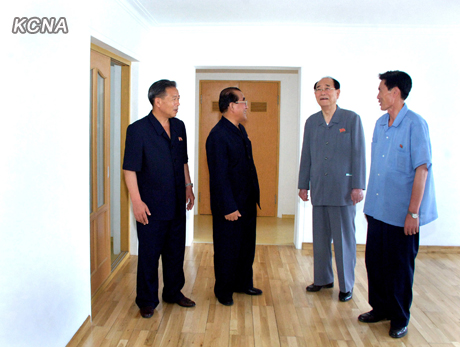 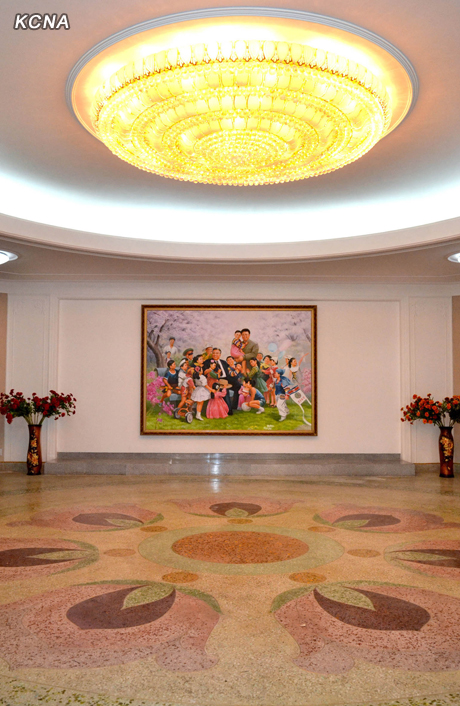