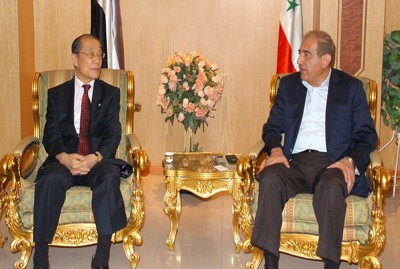 Syrian media reported on 5 July (Thursday) that Deputy Prime Minister and Minister of Internal Trade and Consumer Protection, Dr. Qadri Jamil met with DPRK Ambassador to Syria Choe Su Hon in Damascus on 4 July.  According to the report, Ambassador Choe “voiced his country’s readiness to continue and boost cooperation between Syria and the DPRK in economy and trade, hoping that Syria will emerge from the crisis soon and restore security and stability so that is move forward to build its future.”  Jamil “called for expanding the standing economic and cultural cooperation between the two countries in all field to serve the interests of their people.”