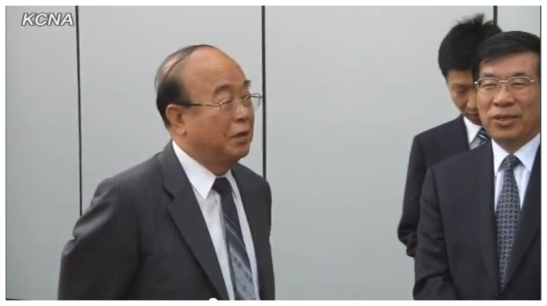 DPRK state media reported that Foreign Minister Pak Ui Chun (Pak U’i-ch’un) departed Pyongyang on 10 July (Tuesday) for the annual AESEAN Regional Forum [ARF] being held in Phnom Penh.  At the airport Pak was seen off by DPRK Vice Foreign Minister Pak Kil Yon, Chinese Ambassador to the DPRK Liu Hongcai and other Pyongyang-based foreign diplomats. When Pak attended last year’s ARF in Bali, he met with his South Korean counterpart Kim Sung-hwan and briefly met with former Japanese Foreign Minister Taekaki Matsumoto.  He also brought along Vice Foreign Minister Ri Yong Ho, who was appointed DPRK representative to the Six Party Talks.  These interactions set the table for US-DPRK interactions that resulted in the Leap Day Deal.  This year’s ASEAN host nation, Cambodia, has expressed hope that this year’s ARF might facilitate similar interactions.  However, based on DPRK state media coverage of Pak’s departure and previous DPRK statements and media activity about South Korea’s political leadership, that does not appear likely.

Meanwhile at ARF, as something Spratly this way comes, South Korea plans to ask the forum to adopt the United Nations Security Council statement condemning the 13 April launch of the U’nha-3.  Yonhap reports:

The forum, hosted by the 10-member Association of Southeast Asian Nations (ASEAN), has served as an important venue for discussions on North Korea. It will mark the first time that high-level diplomats from the two Koreas could have face-to-face meetings on the sidelines since the December death of North Korea’s long-time ruler, Kim Jong-il.

South Korean Foreign Minister Kim Sung-hwan will join the forum and his North Korean counterpart, Pak Ui-chun, is also due to arrive in Phnom Penh on Wednesday, Seoul officials said.

Officials have said South Korea has no plans to hold a bilateral meeting with North Korea during the ARF, but left the door open for an inter-Korean contact organized by an “unofficial channel.”

Diplomatic efforts to resume the six-party talks on ending North Korea’s nuclear ambition have been frozen since April, when North Korea defiantly launched a long-range rocket that failed moments after lift-off. The U.N. Security Council strongly condemned the launch as a disguised test of a long-range ballistic missile and warned the North of further sanctions if it conducts another missile launch or nuclear test.

He declined to elaborate on the language South Korea wants to include in the document.

The key to such a statement is support from Cambodia, which will chair the session, the official said on the condition of anonymity.

The ARF statement is also expected to call for a resumption of the six-party talks that involve the two Koreas, the U.S., China, Russia and Japan, the official said. Among those attending the ARF are top diplomats from the six nations.

Besides North Korea, territorial disputes and diplomatic efforts to reduce tensions in the South China Sea are expected to dominate the ARF, ministry officials said.

Asked about the possible inter-Korean meeting in Phnom Penh, the official replied, “We do not have plans to meet with North Korea for now, and as far as we know, there is no meeting planned between the U.S. and North Korea.

“But, if the North Korean side proposes meeting us, we will have no reason to reject the proposal,” he said.

A trilateral meeting with U.S. Secretary of State Hillary Clinton and Japanese Foreign Minister Koichiro Gemba is set for Thursday on the sidelines of the ARF, ministry officials said.

Following North Korea’s botched rocket launch, South Korean officials have said it will be difficult for the six-party talks to resume this year, citing the upcoming presidential elections in both Seoul and Washington.

Concerns persist that North Korea may soon conduct a third nuclear test to make up for its failed launch. The North’s previous two rocket launches in 2006 and 2009 were followed by nuclear tests.