Kim Jong Un waves to the audience of a concert by the KPISF Song and Dance Ensemble at the Ponghwa Art Theater in Pyongyang on 26 July 2012. Also seen in attendance his wife Ri Sol Ju (3rd R) (Photo: KCNA)

DPRK state media reported on 26 July (Thursday) that Kim Jong Un (Kim Cho’ng-u’n) attended an art performance given by the song and dance ensemble of the Korean People’s Internal Security Forces [KPISF] at Ponghwa Art Theater in Pyongyang on 26 July (Thursday).  KJU’s last reported public appearance was his attendance at a completion ceremony of the pleasure ground on Nu’ngna Island in Pyongyang on 25 July (Thursday).  At the performance, according to KCNA, KJU was joined by his wife Ri Sol Ju (Ri So’l-chu).  DPRK state media reporting also used KJU’s attendance of the concert to indicate that Chief of the Korean People’s Army [KPA] General Staff, VMar Hyon Yong Chol, has taken another of his predecessor VMar Ri Yong Ho’s previous positions; VMar Hyon was identified as Vice Chairman of the Party Central Military Commission.

A performance of the Song and Dance Ensemble of the Korean People’s Internal Security Forces (KPISF) was given with splendor at Ponghwa Art Theatre in Pyongyang on Thursday to celebrate the 59th anniversary of the victory in the Fatherland Liberation War.

When Kim Jong Un, together with his wife Ri Sol Ju, appeared at the auditorium, stormy cheers of “Hurrah!” burst forth.

He waved back to the audience and warmly congratulated them on the war victory day.

The performance began with narration and music “Our Victory Day July 27”.

Put on the stage were colorful numbers including chorus “Long Live Generalissimo Kim Il Sung,” male duet and chorus “Victors,” male guitar quartet ensemble “Song of Soldier,” female sextet “My Dear Has Become Hero” and accordion quartet “We Will As Ever Defend Seas of the Country”.

The performers sang of the undying feats of Kim Il Sung who wrought miracles of history by defeating the most atrocious U.S. imperialists in the war.

Oral narration “Promise,” female solo “He Has Come with President’s Love” and other pieces represent boundless reverence for Generalissimo Kim Jong Il, who developed the Korean People’s Army into an elite army and turned the DPRK into an invincible politico-ideological and military power with his unique Songun politics in the worst adversity to glorify the July 27 victory day.

Dialogue poem “Smile a Broad Smile” and mixed duet and chorus “For Posterity” and other numbers dealing with honor and pride of holding in high esteem Marshal Kim Jong Un, a peerlessly illustrious commander of Songun, who is bringing earlier the final victory of a thriving Korea with noble outlook on posterity and future were acclaimed by the audience.

He expressed great satisfaction over the excellent performance vibrant with the revolutionary zeal and stamina of the vanguard of the Songun revolution.

He mounted the stage to give congratulations on the successful performance, waving back to the enthusiastically cheering performers and audience.

He expressed expectation and conviction that they would share the idea, will, breath and destiny with the leader and take the lead in the defence of the leader, social system and people. He had a photo session with all the participants. 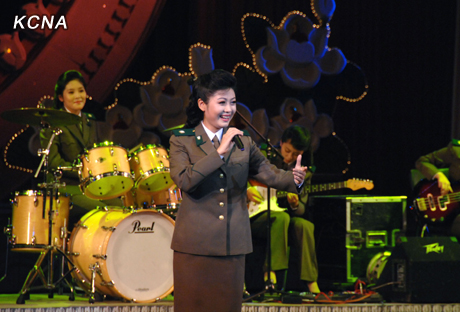 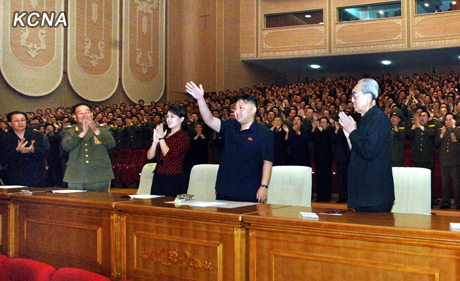 Kim Jong Un was also reported on 26 July to have inspected the Ryugyong Health Complex and an outdoor ice skating rink.  Ri Sol Ju was not reported to have attended this visit.  Instead KJU was accompanied by his aunt Kim Kyong Hui, his uncle Jang Song Taek and KWP deputy (vice) director Ryang Chong Sang.  KJU last visited both the health complex and skating rink in May 2012.  KCNA reports:

He went to the Ryugyong Health Complex first.

Examining the exterior of the health complex, he said that recently appearing buildings including the complex are diverse and peculiar in shape.

At the nice and clean hall he said it seemed that he was briefed on the project in front of the panoramic map a few days ago, but the complex has changed beyond recognition.

Walking along the corridor he said the wall decorated with stone pieces was good just as he said before. The contents of the structure hinge on the building materials used at the final phase of the construction, he added.

He personally opened a dressing box of mass bathroom and dropped in at hot dry, wet and pine tree saunas to learn in detail about the construction. It is important to take thorough-going measure for disinfection of bathrooms including saunas and sanitation is most important, he said.

Going around a barber’s, massage room, family bathroom and other places, he corrected shortcomings one by one. He underscored the need to give finishing touches with an idea that there is no satisfaction in working for the people.

At the popular restaurant on the fourth floor he learned about the service program there. He said that people want to drink refreshing drinks after bathing. It will be good to serve soft drinks, noodle and other foods, he said, adding that the Ryugyong Health Complex should be well known to the people for its tasty noodle.

He then went to the People’s Open-Air Ice Rink.

He went round various places of the ice rink including skating hall, skate service room, lounges for players, clinic, broadcasting room and observation room to learn in detail about the construction.

He said the architectural style and content are fresh and peculiar and everything of the ice rink ranging from its design to construction is on a high level. He set forth the tasks for completion of the construction. 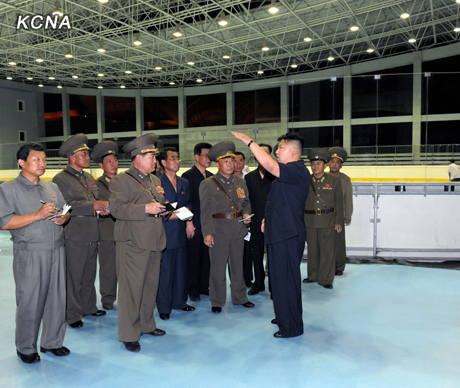 He said as the Ryugyong Health Complex and People’s Open-Air Ice Rink were presents of the Workers’ Party to the people it is important to keep the content ahead of the style. He stressed the need not to care for bringing earlier the day of the completion but make the projects impeccable in a more responsible manner.