DPRK state media reported on 17 September (Monday) that Kim Jong Un (Kim Cho’ng-u’n) attended a performance of the “Arirang” Mass Games on 16 September (Sunday).  KJU’s last reported public appearance was a visit to the Pyongyang Folk Park.  Attending the mass gymnastics  performance with him were VMar Choe Ryong Hae , Director of the Korean People’s Army [KPA] General Political Department (bureau), and VMar Hyon Yong Chol, Chief of the KPA General Staff, others, chairperson of a friendly party and officials of the party, armed forces and power bodies, social organizations, ministries and national institutions, service personnel of the Korean People’s Army and the Korean People’s Internal Security Forces, officials in the fields of science, education, literature and arts, public health and media, labor innovators and working people in Pyongyang.”  The 2012 performances of the Arirang mass games began on 1 August  and were scheduled to end until mid-September.  The run was later extended to an additional 15 days. 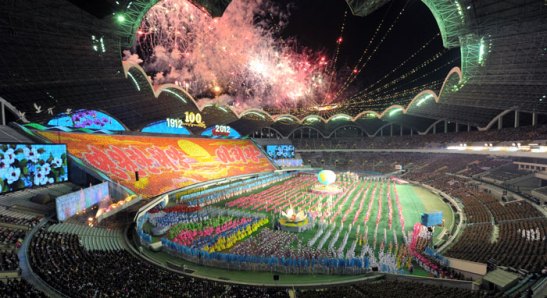 KCNA reported that the “extravaganza staged in vast three-dimensional space was a perfect combination of graceful and spectacular rhythms, dynamic gymnastics, refined artistic representation rich in national flavor, ever-changing background, gorgeous stage decor and peculiar lighting, etc. It clearly showcased the inexhaustible strength and skill of the Korean people and the rapid development of Juche arts.  At the end of the performance fireworks were displayed in succession, beautifully decorating the nocturnal sky of Pyongyang.”  It was also reported that the performance “made a grand epic representation of the past in which a definite end was put to the distress-torn history of the nation and the present of So’ngun Korea in which its dignity has been placed on the highest level thanks to the peerlessly great leaders and its eternal prosperity.”

According to KCNA, Kim Jong Un, “expressed great satisfaction over the fact that ‘Arirang’ was successfully re-represented in fresh style in reflection of the need of the developing era and the desire of the people. He extended thanks to the performers and creators.”

An image of the DPRK flag produced by card stunt performers during a performance of the “Arirang” Mass Games (Photo: KCNA)