The Other SPA No-show

Kim Kyong Hui was not the only member of the DPRK’s core leadership who appeared to be absent from the 12th SPA’s 6th session.  Based on DPRK state media coverage of the SPA session, Paek Se Bong (Paek Se-pong), Chairman of the DPRK Second Economy Commission [a.k.a. Second Economic Committee] did not appear on the rostrum at the Mansudae Assembly Hall on Tuesday (27 September).  The Second Economy Commission’s subordinate bureaus control the factories involved in the production and manufacturing of weapons, missiles, warships,  armored combat vehicles, communications, aviation parts and other equipment used by the Korean People’s Army, DPRK reserve forces, as well as arms and equipment sold or exchanged abroad. 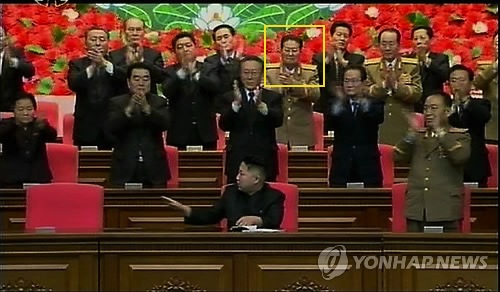 Second Economy Commission Chairman Paek Se Bong (highlighted) applauds at the start of a national report meeting for Kim Jong Il’s birthday on 15 February 2012. Paek was given the rank of Colonel General (sangjang) in a military promotions list issued on the occasion of KJI’s 70th birthday. At past national events, Paek had been observed wearing business suits (Photo: KCNA-Yonhap)

Unlike Kim Kyong Hui, Paek Se Bong’s absence is unusual.  He has has been present for every SPA session since 2003 and  regularly attends a number of Pyongyang-based events (of varying significance) with other members of the central leadership.  In February 2012 Paek was promoted to the military rank of Colonel General (sangjang).  On 31 August 2012 DPRK state media reported that Paek Se Bong joined Kim Jong Un on a visit to the KPA Exhibition of Arms and Equipment.  It was a rare appearance at a #1 visit for Paek, who was seldom reported to have accompanied KJU, or KJI.  His one-off appearance at the KJU visit and his SPA absence may be linked to reports that rainy season flooding in the DPRK caused setbacks in ongoing construction work at the Tonghae (Musudan-ri) launch facility and the nuclear detonation site in Kilchu County, both in North Hamgyo’ng Province.