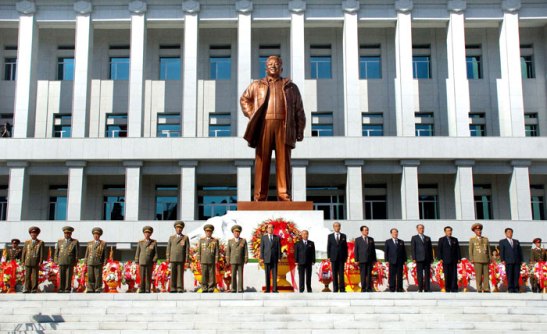 DPRK state media reported on 2 October (Tuesday) that a statue of Kim Jong Il was unveiled and dedicated at a ceremony on the campus of Korean People’s Army [KPA] Unit #10215.  The unit is the external name for the headquarters and command element of the Ministry of State Security [MSS]**.  Attending the dedication ceremony were Supreme People’s Assembly [SPA] Presidium President Kim Yong Nam, DPRK Cabinet Premier Choe Yong Nim, Director of the KPA General Political Department (bureau) VMar Choe Ryong Hae, Minister of State Security Gen. Kim Won Hong, Korean Workers’ Party [KWP] Secretary and Director of Propaganda and Agitation (publicity and information) Kim Ki Nam and  “other senior party, state and army officials, officials concerned, commanding officers and service personnel of the unit, military families, officials and employees of the unit who contributed to the erection of the statue.” 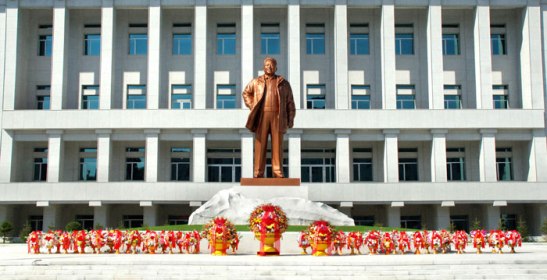 KCNA reported that the statue “depicts the great Generalissimo imposingly standing with one of his hands placed on his waist, his face beaming with a broad smile” and “seems to call on all the service personnel and people to dynamically advance towards a final victory, wishing the great Paektusan (Mt. Paektu) nation a rosy future of eternal prosperity.”  Participants at the dedication ceremony delivered a floral basket on behalf of DPRK supreme leader Kim Jong Un (Kim Cho’ng-u’n), a floral basket from the KWP Central Committee, the KWP Central Military Commission and the National Defense Commission and a floral basket from KPA Unit #10215.

After the floral baskets were placed at the statue’s pedestal, Minister of State Security Gen. Kim Won Hong delivered a speech to dedicate the statue.  According to KCNA Gen. Kim said in his remarks that “Generalissimo Kim Jong Il developed the WPK into an eternal party of Comrade Kim Il Sung and turned the socialist country into an invincible politico-ideological power and a world class military power.  Kim Jong Il’s  extraordinary leadership provided a sure guarantee for foiling all anti-DPRK plots of the U.S.-led imperialists and defending the single-minded unity of the revolutionary forces and Juche-oriented socialism as firm as an iron wall.”  Gen. Kim also “called on all service personnel and people to work hard to win a final victory of the revolutionary cause of Juche, united close behind Marshal Kim Jong Un.”  KCNA reported “after being briefed on the statue, the participants looked round the statue.”

KPA Unit #10215 and the Ministry of State Security have played a significant role in Kim Jong Un’s succession and transition.  Various sources and media reports have claimed that MSS was one of the organizations where KJU cut his leadership teeth during 2007 to 2009.  The MSS did not use KPA Unit 10215 as its external use name until April 2009, after KJU’s hereditary succession was formally and internally communicated to second- and third-tier party, security and government officials.  On 9 May 2009, DPRK state media reported that Kim Jong Il conducted a field inspection of KPA Unit 10215’s command staff university, accompanied by leading MSS officials.  During his visit, KCNA reported that KJI’s first stop was the Kim Il Sung statue and revolutionary history exhibition.

In April 2010 and April 2011, KJI and KJU attended concerts by KPA Unit #10215’s art propaganda squad on the occasion of Kim Il Sung’s birthday (The Day of the Sun).  KJI and KJU also attended one of the unit’s concerts in October 2010, which marked their first public appearances after KJU’s mass public introduction at the 3rd Party Conference on 28 September 2010.  On 25 October 2010, DPRK state media reported that KJI and KJU inspected KPA Unit #10215’s command element.  On 2 July 2011 DPRK state media reported that KJI and KJU attended a concert of the “the fourth second-term contest of art group members of the military families.”  Performing at that concert were the wives and families of members of KPA Unit #10215, KPA Unit #963 (Guard Command HQ) and the Korean People’s Internal Security Forces [KPISF].  These security organizations form the troika of security organizations with the mission of providing personal and political security for the Kim family and the DPRK’s core political leadership and guarantors of KJU’s succession.

Kim Jong Un’s wife Ri Sol Ju (Ri So’l-chu) is believed to have ties to the Ministry of State Security.  According to ROK media reports, Ri was a singer in KPA Unit #10215’s art propaganda squad.  It is entirely likely that as a singer, Ri may have been added to various singing groups and art troupes, particularly performances designated #1 events (attended by KJI or KJU).  In any event, if other reporting about Ri traveling to Japan in 2002 with a music group and ROK in 2005 as part of a cheering section are accurate then her name definitely passed through MSS’ channels.

**The MSS is the DPRK’s so-called secret police force whose primary mission is enforcing political security (ensuring KWP control and Kim family rule in the country).  MSS performs a number of functions including managing a domestic surveillance network, providing protection escort services, watching foreigners in the DPRK, monitoring the activities of DPRK citizens who travel (or return from) abroad, managing a network of detention facilities, monitoring (surveillance of) the communications and activities of party, government and economic officials, conducting foreign trade activities and general management and oversight of border security units and the Military Security Command.