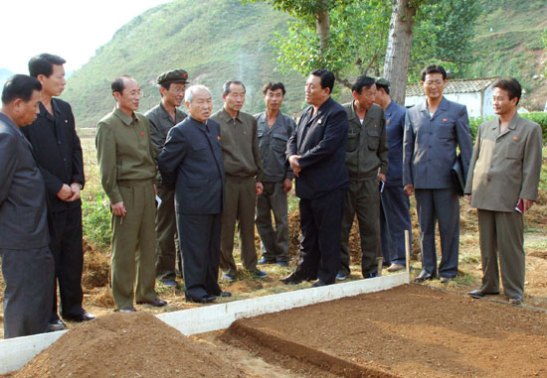 DPRK Premier Choe Yong Rim (4th L) is briefed during his visit to the turf institute at the State Academy of Sciences (Photo: Rodong Sinmun)

DPRK state media reported on 7 October (Sunday) that DPRK Cabinet Premier Choe Yong Rim visited a telephone production site and the Academy of  Agricultural Science.  KCNA reported that his first was when he “dropped in at a base of producing phone apparatus to discuss the issue of putting the communications on a modern and IT basis.”  Choe then visited the Turf Institute at the State Academy of Agricultural Science where “the premier acquainted himself with the production of turf and scientific researches.”  KCNA reported that a “field discussion was made on the issues of massively cultivating turf seeds by directing primary efforts into scientific researches, fixing the right time according to species and temperature records and putting the methods of planting turf on a scientific basis in line with the mission of the institute.”

Choe Yong Rim also “learned about the technological characteristics and economic efficiency of the farm machines made by the institute of agricultural mechanization under the Academy of Agricultural Science.”  After his tours, Choe convened a “consultative meeting, measures were taken for meeting the requirements of designs in manufacturing farm machinery and laying a solid material and technological foundation of the institute.”