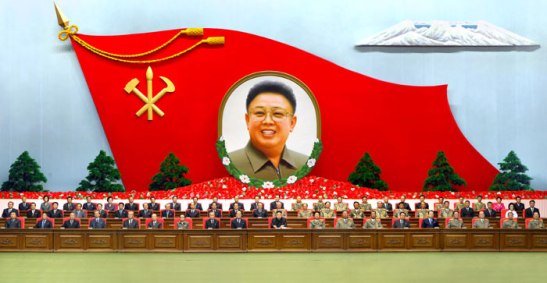 A view of the rostrum at a national meeting held to commemorate the 15th anniversary of Kim Jong Il’s election as Korean Workers’ Party General Secretary. (Photo: Rodong Sinmun)

A view of the 25 April House of Culture in Pyongyang, the venue for a national meeting held for the 15th anniversary of Kim Jong Il’s election as party general secretary (Photo: KCNA)

Kim Ki Nam described KJI’s 1997 elected as  “an epochal political event in the development of the WPK and accomplishment of the revolutionary cause of Juche.”  According to KCNA Kim said that “the greatest exploit of Kim Jong Il to shine in the history of the WPK that he built it into a revolutionary party that established steadfast ideological and leadership system of the leader, a mother party that formed a harmonious whole with the popular masses and served them and an invincible party with iron-like disciplines and high fighting efficiency” and that KJI “oriented the party work towards implementation of the military-first (songun) revolutionary line to bolster the national defense capacity in every way.”

After listing various highlights from Kim Jong Il’s career as KWP General Secretary, Kim Ki Nam said, “Kim Jong Un opened up a new chapter in accomplishing the cause of perpetuating the memory of the leader to glorify Kim Jong Il’s undying revolutionary life and exploits for all ages.He also made sure that Kim Jong Il is held in high esteem as permanent general secretary of the WPK to develop it into a glorious party of Kim Il Sung and Kim Jong Il.”  KCNA also reported that Kim called “called on all the officials and party members and other working people to firmly establish a monolithic leadership system of Kim Jong Un in the party and society and closely rally behind him.”