VMar Choe Ryong Hae delivered the keynote address at the re-opening of the Mangyo’ngdae Fun Fair.  According to KCNA, VMar Choe said “the Mangyo’ngdae Funfair was wonderfully rebuilt thanks to the energetic leadership of Kim Jong Un, who is possessed of noble outlook on the country, people and rising generations, and thanks to the spirit of thoroughly carrying out his instructions, patriotism and loyalty of the revolutionary army that heartily responds to the party’s calls.”  Choe also “called on officials and employees of the Mangyongdae Funfair Management Institution to bring about a turn in operating the funfair and make good inspection and management of its facilities so as to contribute to providing the people with pleasant time.” 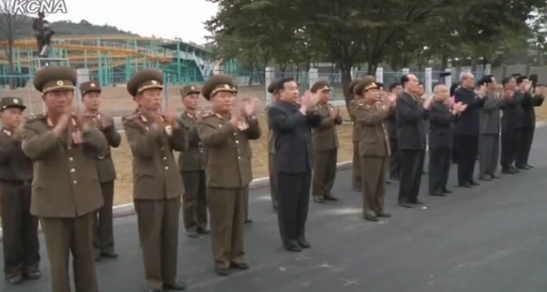 VMar Kim Jong Gak delivered the keynote address at the re-opening of Taeso’ngsan Fun Fair.  According to KCNA, VMar Kim said “the Taesongsan Funfair changed its contents and style in line with the growing requirements of the people for better cultural and emotional life while preserving its peculiar characters, adding it is another edifice that embodies the WPK’s deep love of the people.”  Kim also noted that “renovation of the funfair showed the true picture of Korean-style socialism that advances towards the world to realize the people’s ideals, and will enable the people to lead a more rich cultural and emotional life.”