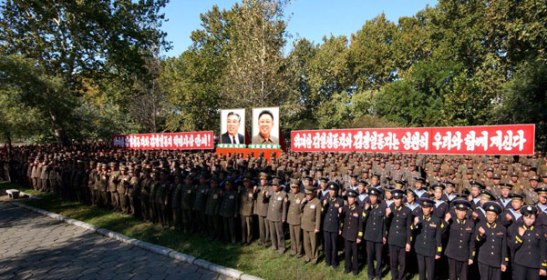 KPA service members and officers attend an 11 October 2012 meeting prior to beginning a river excavation and embankment project on the Pot’ong River in Pyongyang (Photo: Rodong Sinmun)

DPRK state media reported on 11 October (Thursday) that service members and officers of the Korean People’s Army [KPA] held a meeting prior to beginning a river excavation project in the Pot’ong River.  According to KCNA, the “project is the noble work for translating into reality the grandiose plan of the dear respected Marshal Kim Jong Un to spruce up Pyongyang as befitting the capital city of Songun Korea and face-lift the land of the country as a socialist land of bliss as desired by the great Generalissimos.”  Attending the meeting were Chief of the KPA General Staff Hyon Yong Chol and Senior Deputy (1st Vice) Minister of the People’s Armed Forces and Director of the KPA General Logistics Department, VMar Hyon Chol Hae, senior officials of the Ministry of the People’s Armed Forces and KPA service members.  KCNA reported that “the venue of the meeting was replete with their militant mettle to complete it in the spirit of ‘At one go.'”

The river excavation project began after a similar work was completed at the Hapjang River.  According to a 12 October report in KCNA, the Pot’ong River project is “three times the scale” of the one at the Hapjang.  KCNA also reported that “the project envisages removing hundreds of thousands of cubic meters of sludge from the bottom of the river section extending more than ten kilometers, planting 60 000 trees, turfing tens of hectares of land and paving thousands of square meters of promenade with colorful flagstones,” and “the sludge removed by the soldiers for 24 hours from noon on Thursday accounted for 42 percent of the total amount.”

An excavator of an unknown make dredges the Pot’ong River in central Pyongyang (Photo: KCNA/KCTV screengrab)