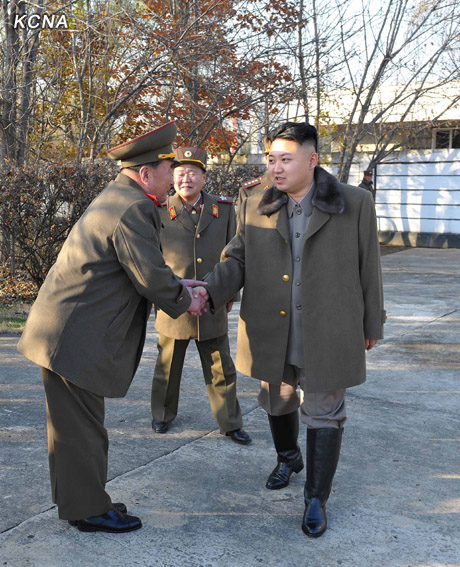 There has not been an official announcement about the personnel change  in DPRK state media.  It is likely that in lieu of an explicit announcement, Gen. Kim’s new position will be publicized when he attends a public event and is identified as the new defense minister.  On 29 November (Thursday) DPRK state media reported that Kim Kyok Sik attended two events celebrating the Day of Airmen, the 67th anniversary of the foundation of the KPA Air and Anti-Air Forces.  One of these events was a celebratory banquet hosted by the Ministry of the People’s Armed Forces, however VMar Choe Ryong Hae delivered the congratulatory speech.  The media reports did not identify Kim Kyok Sik (or any other participants) by his position.

If corroborated by the DPRK, this will be the fourth personnel appointment in the KPA’s high command in 2012.  In April, Kim Jong Gak replaced VMar Kim Yong Chun as Minister of the People’s Armed Forces and VMar Choe Ryong Hae was appointed Director of the KPA General Political Department (bureau), filling a vacancy left by the November 2010 death of incumbent VMar Jo Myong Rok.  In July, VMar Ri Yong was dismissed as Chief of the KPA General Staff and replaced by Hyon Yong Chol.

Gen Shwe Mann (left) and Gen Kim Gyok-sik (R) exchange copies of a memorandum of understanding at the Defense Ministry on November, 2008.

A graduate of Kim Il Sung Military University, Gen. Kim Kyok Sik was a close military aide and advisor to the late DPRK supreme leader Kim Jong Il.  From 2009 to 2011 he served as commanding officer of the IV Army Corps, which is stationed near Haeju, South Hwanghae Province, on the Military Demarcation Line [MDL], the controversial maritime DPRK-ROK border.  Gen. Kim had a commanding role in the 23 November 2010 artillery shelling of Yo’np’yo’ng Island which resulted in the deaths of two ROK Marines and two ROK civilians.

From 2007 to 2009 Kim Kyok Sik served as the Chief of the Korean People’s Army [KPA] General Staff.  One of the more notable (and au courant) aspects of Gen. Kim’s tenure at the General Staff for external observers was when he met with and signed a military and munitions cooperation agreement with former Myanmar (Burma) Army General  Shwe Mann in November 2008 during a visit to the DPRK by a Myanmar Armed Forces delegation.  During the 1970s and early 1980s Kim served as a military attache at the DPRK Embassy in Syria, where he coordinated military assistance to the Syrians as well as managed the provision of arms and advisors to revolutionary paramilitary organizations operating in Africa and the Middle East.   Gen. Kim is often identified by external Pyongyang watchers as a “hardliner” because his command experience has been in the II and IV Army Corps, two of the KPA’s four forward-deployed army corps units whose command and senior officers are militantly anti-ROK. 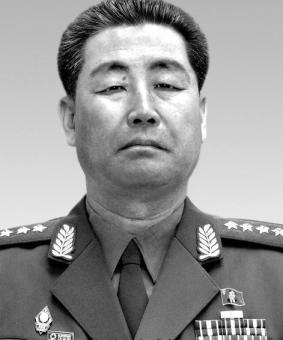 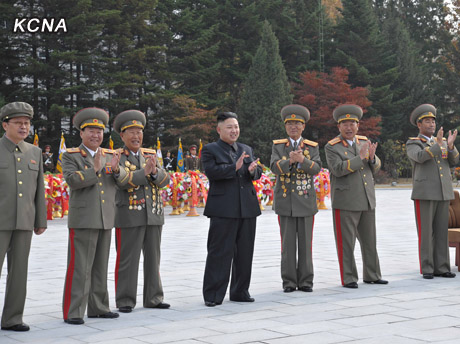 One of Kim Jong Gak’s last reported public appearances was his attendance at the unveiling of a statue of Kim Jong Il on the campus of the Kim Il Sung Military University on 29 October 2012.  In February 2012 Kim Jong Gak was promoted to Vice Marshal (ch’asu) and in April 2012 was appointed Minister of the People’s Armed Forces, meaning that he formally held the position for seven months.  In the weeks leading up to his dismissal, Kim discharged a number of ministerial duties.  He  delivered the keynote address at the opening ceremony of a fitness center on T’ongil Street in east Pyongyang on 16 October 2012.  He received a Cuban Revolutionary Armed Forces delegation led by Gen. Joaquín Quintas Solá on 8 September 2012, spoke at opening ceremonies for the Pyongyang Folk Park and the renovated Taeso’ngsan Fun Fair (amusement park) and delivered a speech at an 18 October 2012 KPA rally on improving city parks in Pyongyang.

Kim Jong Gak was linked to transition and succession planning.  He was appointed senior deputy (1st vice) director of the Korean People’s Army [KPA] General Political Department (bureau) [GPD] in 2007 (with the GPD taking responsibility for hereditary succession-based political education and indoctrination of KPA officers and service members) and elected in 2009 as a member of the DPRK National Defense Commission (the first major political line-up of the nascent Kim Jong Un regime).  In both of these positions, Kim Jong Gak enjoyed an increasing public profile in DPRK political culture.  His profile was enhanced further when he was elected as an alternate (candidate member) of the KWP Political Bureau and a member of the KWP Central Military Commission at the 3rd Party Conference  on 28 September 2010.  Kim Jong Gak had a reputation as a skull cracker in Pyongyang’s corridors of power, however he was once gently admonished by Kim Jong Il for laughing too much during a field inspection.  Kim’s career, like many current and former DPRK elites, has been mixed.  In the early 2000s he was migrated from his position as Vice Minister of the People’s Armed Forces to the corps command, however it remains unclear if this was an actual demotion or if he had been tasked by the center to supervise a restructuring of military units.

Had Kim Jong Il been alive, Kim Jong Gak’s February 2012 promotion and his April 2012 appointment as minister would have been realized.  It is also likely the promotion and appointment were part of KJI’s final bequests.  Kim Jong Gak’s removal from office does not represent signs of instability in the country’s leadership, a claim that might be raised by the ambulance chasers in the Pyongyang-watching community.  Rather, it might represent that KJU has continued to successfully consolidate his authority, showing he has the ability and clout to make his own senior personnel appointments.  Kim Jong Gak’s dismissal does not appear to be linked to any major policy differences or insubordination.  Another factor is that during 2007-2011 Kim was a key official who supervised a number of dismissals in the KPA’s officers’ corps.  This may have made his position untenable.   If his appointment as minister was a holdover from the KJI era, it was probably contingent on VMar Ri Yong Ho remaining as Chief of the KPA General Staff. (Whether Kim and Ri were intended to support , neutralize or spy on one other is separate matter altogether.)  If Ri’s dismissal was due to corruption or misappropriation of assets, Kim Jong Gak may have been one of the insects scurrying away when the central party turned that rock over. 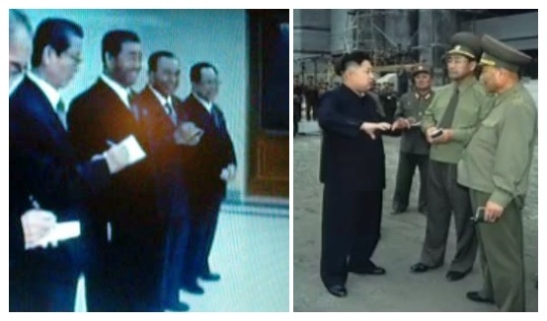 After Ri Yong Ho’s dismissal, the core leadership may have questioned Kim Jong Gak’s loyalties.  Three days after Ri’s dismissal, the KPA held “a resolution meeting of officers and men of the KPA” on 18 July.  State broadcast media coverage of the meeting provided a voiceover which summarized Kim’s remarks then cut to Kim delivering a personal loyalty pledge.  While not unprecedented, it was notable that a senior official used the first-person singular (“I”) as against the collective first-person plural (“we”) in a public speech.  Perhaps this was Kim’s apologia or act of contrition:

With a firm viewpoint that military life is preparation for battles, I will always run and run again until my shoes wear out in order to turn all companies of the entire army into the warm homes ofthe soldiers, and will become a truly loyal servant who works hard in order to feed the soldiers well.

I will work to realize, at the forefront, the resolution of the party to let the people enjoy the socialist wealth and honor to their heart’s content by carrying out the organizing and commanding in a responsible manner so that our people’s army may always play an active role in consolidating as firm as a rock the great army-people unity that is the mainstay of the military- first revolution, find and do more good work for the people, and bring about ceaseless innovation in important constructions for the construction of a powerful state and the people’s happiness while highly upholding Kim Jong Il patriotism.

A Day at the Races? 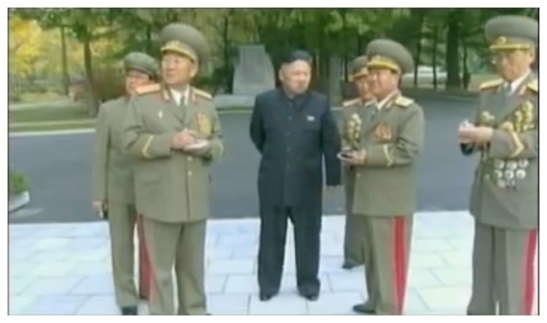 Kim Jong Un is briefed prior to a statue dedication ceremony at KIS Military University. Kim Jong Gak was not part of this group of senior officials which included the KPA’s chief political officer and the chief of the general staff (Photo: KCNA/KCTV screengrab)

Kim Jong Gak’s dismissal was foreshadowed at one of his last known public appearances at the statue dedication ceremony at Kim Il Sung Military University.  Kim appeared in photographs of the event published by DPRK state media.  However, in an official documentary film about the statue dedication and related events, Kim is not shown in close-up shots of the leadership on the dais. (Kim Kyok Sik was shown.)  When Kim appeared in the film, it was almost always in the background.  He is not shown attending Kim Jong Un’s briefing with KISMU officials prior to the ceremony and does not appear in KJU’s tour of the KISMU historical exhibition which followed the ceremony.  When Kim Jong Un greeted various foreign ambassadors and diplomats at the end of the ceremony, VMar Choe Ryong Hae was KJU’s second and Kim Jong Gak is seen listlessly standing in the background.  This did not conform to the standard practice in which the Minister of People’s Armed Forces serves as the KPA’s leading representative in external relations. 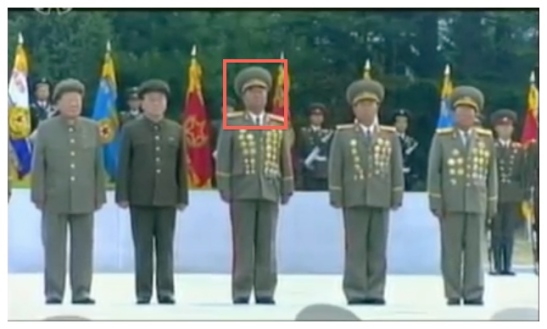 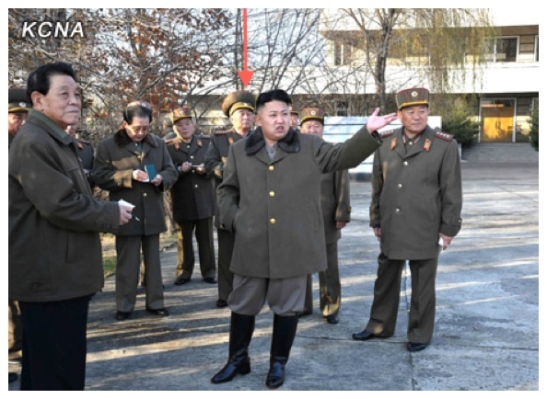 Kim Jong Gak’s status was also questionable when he did not accompany Kim Jong Un’s visit to the equestrian company of KPA Unit #534, which Kim Kyok Sik attended.  Kim Jong Gak’s absence was notable because KJU’s coterie included most of the KPA’s senior leadership, except the defense minister.  Prominent in state media photographs of the visit was Kim Kyong Ok, a member of the KWP Central Military Commission and senior deputy (1st Vice) Director of the KWP Organization Guidance Department.  In his OGD position Kim manages personnel affairs in the KPA and serves as one of Kim Jong Un’s main gatekeepers with the KPA.  Kim Kyong Ok was a key figure in the dismissal of Ri Yong Ho in July and most likely played a similar role in Kim Jong Gak’s ouster.