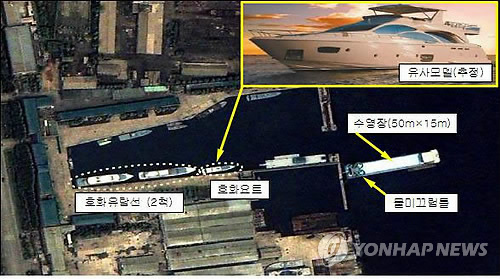 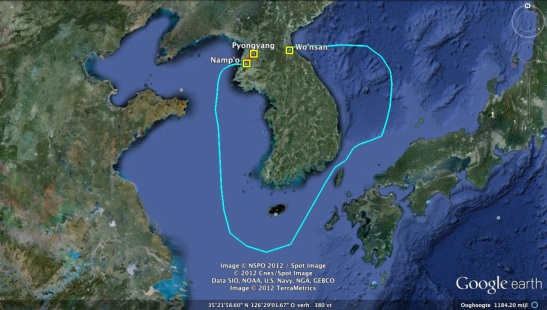 South Korea media reports that Kim Jong Il’s yacht and two luxury ships were relocated from the DPRK’s east coast to the Ku’msusan Memorial Palace of the Sun in Pyongyang in a 2800 km (1,739 mile) journey over sea and land during late October 2012.    Yonhap, citing South Korean (ROK) government officials, reported on 7 December (Friday) that at the end of October, Kim Jong Il’s Azimut yacht departed the eastern port city of Wo’nsan, Kangwo’n Province.  The ships traveled south around the Korean Peninsula and made their way to Namp’o.  The yacht was then placed on customized railway cars for the 48 km (30 miles) journey to Pyongyang.  In order to transport the yacht from Namp’o to Pyongyang electricity poles were demolished and relocated, and parts of the railway lines were reconstructed. 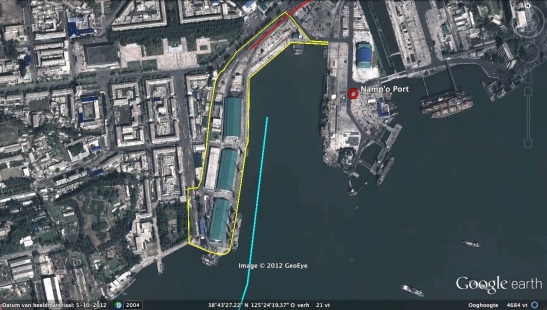 A view of Namp’o Port in Namp’o, South P’yo’ngan Province. The outlined facility at the left is most likely where KJI’s pleasure boats were transferred for delivery to Ku’msusan in Pyongyang via railway (Photo: Google image) 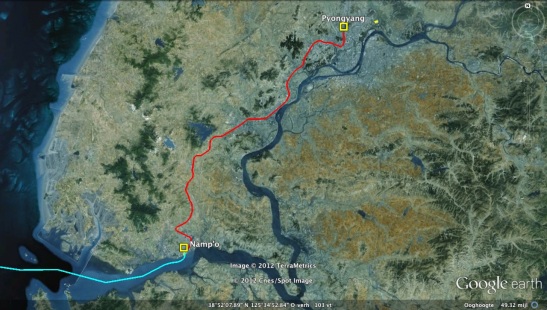 After the late DPRK supreme leader’s remains are prepared for public display at Ku’msusan, Kim Jong Il’s yacht will be part of a public exhibition of his possessions in a similar fashion to those of his father, the late DPRK President and founder Kim Il Sung.  KJI enjoyed spending time on his pleasure boats.  When he was in Wo’nsan or Hamhu’ng, South Hamgyo’ng Province, he enjoyed fishing and party excursions as well as working vacations on his yacht.  His last known yachting vacation occurred in August 2011, prior to his departing for his visit to the Russian Far East and China later that month.

An image of facilities for KJI and DPRK elite boats at Wo’nsan Port where the ships docked prior to their journey for Pyongyang (Photo: Google image) 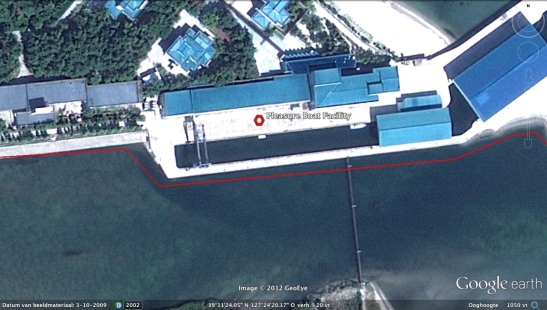