View of the platform and participants at a mass rally in Pyongyang on 5 January 2013 (Photos: KCNA) 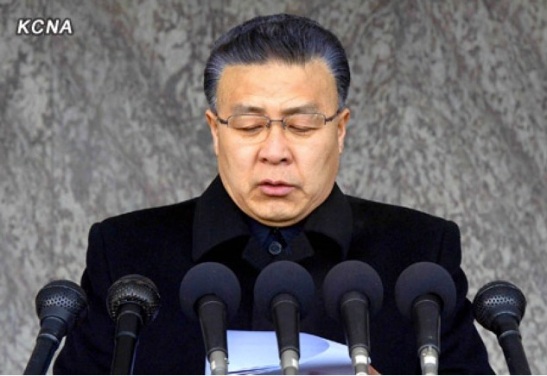 Mun Kyong Dok delivers a report during a mass rally “to carry out the important tasks set forth in the historic New Year Address” by Kim Jong Un on 5 January 2013 (Photo: KCNA)

Chief Secretary of the Pyongyang City (municipal) KWP Committee Mun Kyong Dok delivered a report in which he said, “Kim Jong Un’s televised New Year Address serves as a important guideline indicating the path of the great Kim Il Sung’s and Kim Jong Il’s Korea and a militant banner calling upon all the service personnel and people across the country to turn out in the general advance for bringing about a turning point in the building of a thriving socialist nation.  A firm guarantee was provided for brilliantly carrying forward the revolutionary cause of Juche to completion under the leadership of Marshal Kim Jong Un.  Through the worthwhile drive last year all the service personnel and people were convinced that the cause of building a thriving nation is sure to be accomplished under the leadership of Kim Jong Un.”  According to KCNA, Mun “stressed the need for officials, party members and other people in Pyongyang to perform greater miracles and innovations this year which marks the 65th anniversary of the founding of the DPRK and the 60th anniversary of the victorious Fatherland Liberation War in hearty response to the New Year Address” and “called for more splendidly sprucing up Pyongyang as befits the capital of Chuch’e Korea and Military-First (So’ngun) cultural hub, true to Kim Jong Un’s idea of building a highly civilized power.”

Minister of Light Industry An Jong Su said “modernization of light industrial factories would be steadily pushed forward and raw material bases of local industrial factories be consolidated and the management of equipment and technical control improved to increase the production of quality consumer goods favored by people.”  President of the State Academy of Sciences Jang Chol “renewed the pledge to dynamically wage the drive for pushing back the frontiers of latest science and technology in the same spirit as were displayed in successfully launching satellite Kwangmyo’ngso’ng 3-2, develop the nation’s science and technology as soon as possible and give fuller play to the dignity and might of the great Mount Paektu (Paektusan) nation.”  Chair of the Rihyon Vegetable Cooperative Farm Management Board Jong Yong Suk “vowed to raise the level of scientific and intensive farming and establish a cyclic production system and thus attain the goal of grain production this year without fail.”  Chairman of the Pyongyang City chapter of the Kim Il Sung Youth League Ri Kun Chol said, “It is a firm faith and will of the young people to become a reliable scout party of the ranks of the general advance in glorifying this significant year as the one of great creation and change, adding that the young people in Pyongyang will become young heroes making breakthrough towards victory in every work site of building an economic power. “