Kim Jong Un (C) walks down a corridor at the construction of the Taesongsan General Hospital (Photo: Rodong Sinmun)

According to KCNA the Taesongsan General Hospital has three inpatient care departments and acute care facilities.  KJU first toured the hospital library and looked at a portrait of his father, the late leader Kim Jong Il.  Kim Jong Un said, “As I stressed while going round this place last year, it is important to provide all amenities favorable for healthcare and treatment of patients while building it splendidly and fashionably.”  KJU also noted a painted slogan board in hangul and he said “it is better to write signboards not only in Korean but in foreign languages.”  He also asked officials to increase the number of informational aids and signage.  KJU toured an endoscopy unit and operating room.  At the hospital’s surgical units he instructed the installation of plastic wallcovering and enquired about prophylactic conditions.  He also visited an intensive care unit and enquired about the unit’s monitoring equipment.  According to KCNA Kim Jong Un “expressed satisfaction with an effective use of space in the abdominal surgical department, underlining the need to make a good use of space when building not only hospitals but other structures appropriate to their usage and characters.”  He said that “to this end, it is important to properly design and construct objects and make strict inspection before their inauguration” 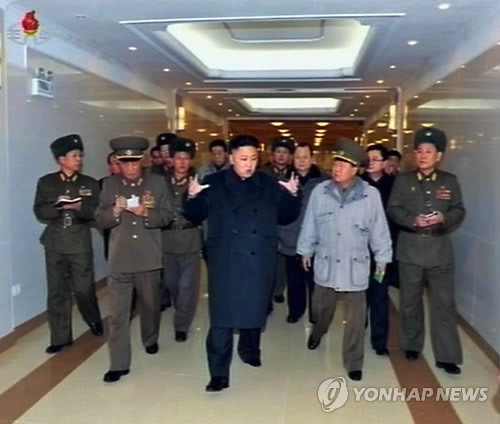 Kim Jong Un also toured patient rooms and “praised the builders for constructing them in such a way as to keep them warm and clean so that patients may not have any inconveniences.”  To complete the hospital KJU instructed the construction personnel “to build pavilions and plant lots of trees to create good environment for the patients’ walk before winding up the construction of the hospital and thus construct a fashionable one,” “called for successfully managing and operating the hospital” and he “underlined the need to raise the level of science and IT in the field of medical science in order to improve healthcare.”  Kim Jong Un also “extended thanks to the Korean People’s Army Unit 462 for building it and promised to visit it again after its completion.”

According to KCNA’s report on Kim Jong Un’s visit, construction on additional hospitals will begin in Pyongyang during 2013, including a pediatric hospital and a dental hospital.  Kim Jong Un said on the upcoming hospital construction “it is necessary to build them successfully so that they may be impeccable in any aspect by applying good experience gained from the building of the Taesongsan General Hospital.”

Appendix to this KJU vist item

Interestingly, but perhaps unremarkably, Jang Song Taek did not attend this KJU visit.  To some Pyongyang watchers, this might foreshadow a downgrade in Jang’s Triple AAA political status particularly because he has an active interest and leading role in capital construction (particularly public service facilities and critical infrastructure).  However, Mr. Jang may be enjoying a winter respite after a busy year (as has been his wont in the past).  Mr. Jang may have has his hands full with the presence of 70-odd Chinese economic and trade officials from Jilin Province, who arrived in the DPRK “several months ago” to assist DPRK officials under the auspices of the Sino-DPRK Economic Trade Zone Management Committee to assist in ongoing development of the Raso’n and Hwanggu’mp’yo’ng/Wihwa Islands special economic zones.  Mr. Jang may also be conducting other foreign relations with close allies as well as supervising the formulation of the country’s official response (s) to whatever statements or resolutions are forthcoming from the United Nations Security Council on the 12 December 2012 launch of the U’nha-3 rocket.