DPRK state media reported on 25 January (Friday) that the Korean Workers’ Party Political Bureau disseminated a reported on 23 January (Wednesday) to convene the 4th Meeting of Party Cell Secretaries on 28 January 2013 (Monday) “to make sure that the whole party is consolidated and a turning-point is made in building a thriving socialist nation by strengthening the party cells, basic organizations of the WPK and cornerstones propping it up, under the prevailing situation in which the struggle for accomplishing the revolutionary cause of Juche is being waged on a new, higher stage” and that “strengthening the party cells constitutes a main link in the chain efforts to enhance the capacity of the party in every way and increase the party’s leadership function and role in the revolution and construction and a consistent policy adhered to by our party in party construction and party work.” 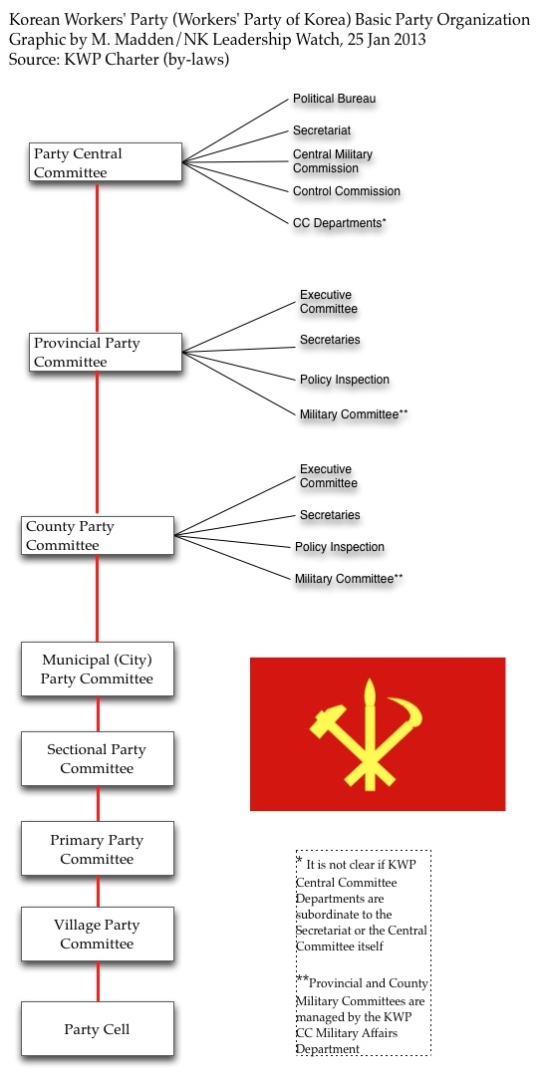 According to the Political Bureau’s report: “The dear respected Comrade Kim Jong Un, who is successfully carrying forward and developing the idea of the great Generalissimos Kim Il Sung and Kim Jong Il on building the party and their feats, specified the original idea and line of strengthening and developing the WPK into Kim Il Sung and Kim Jong Il’s party which will be glorious forever. He took important steps for decisively raising the leadership ability and role of the party by strengthening all the party cells as demanded by the development of the party and revolution. He conferred on the secretaries of the party cells the valuable title of revolutionary soldier faithful to the party and scout who takes the lead in implementing the party’s policies. He is wisely leading them to glorify the honor.”

The Political Bureau’s report is similar to a long essay “Party Cells Are Cornerstones That Uphold Our Party” by Kim Jong Su (Kim Cho’ng-su) which was published in Rodong Sinmun on 21 January 2013 (Monday), two days before the Political Bureau disseminated (through party cells and party committees, no less) its report on the party cell meeting, excerpted below:

Party members, different from each other in terms of workplace, duty, career and merits, length of party life, and the like, may belong to respective party cells. However, the ideological food given to the party cells of the entire party and to party members is only the idea of the leader, and the leadership system established in the party cells is only the leader’s leadership system. Only when the way of party life based on the revolutionary view of the leader is thoroughly established in all party cells, and party members are organizationally and ideologically trained without interruption can our party be further strengthened into an ideologically pure body and organizationally integral whole.

Although our functionaries and party members’ way of party life is at a sublime height, but it is not maintained by itself. The way of party life — which absolutely follows and sincerely upholds only the idea and leadership of one’s own leader [ryo’ngdoja] under any condition and environment, thinks and practices only as indicated by one’s conscience of party membership in any suffering and trial — continues to be vigorously displayed when the function and role of the party cells are continuously improved. Our party, in which all party cells take the responsibility for and correctly lead the party life of party members, will display dignity in the future as a powerful party that is most solid and has the might of unity.

Party cells are the basic combat units of the party that organize and mobilize the party members and the masses to the implementation of the party line and policy.

The work of strengthening the party and improving its leading role is not done simply when that is emphasized in words and slogans are shouted. It can be successfully carried out only when functionaries, party members, and workers are vigorously rallied to the implementation of the party policy. The combative might of the party is guaranteed by the spirit of the tens of millions of masses to death-defyingly implement the party policy and the unyielding power of execution.

The line and policy of our party are the science and the truth. Here are expounded in their entirety the right guideline for continuously strengthening and developing all the fields of politics, military affairs, economy, and culture and the correct path for building a powerful state in the new century and realizing the ideal of the people. Their validity and vitality are to be clearly proven and further lifted when all party cells fulfill their respective responsibility and role. No matter how good and right are the line and policy the party may bring forward, they may suffer an eclipse at the lowest echelon if party cells do not fulfill their respective roles. If the strategic line and the revolutionary guideline presented by the party are to be implemented with consistency, party cells should move the minds of party members and workers and bring them into action. We can say that these party cells are the ranks of death-defying implementation that carry on with the determination of our party with practice, and the cornerstones that uphold the party.

The respected and beloved marshal presented, in the historic New Year’s address, the unchangeable path on which our party and people will advance and a programmatic task to open an epoch-making phase in the building of a powerful state. Our march road is clear and just, and our party’s faith and will to glorify our country and our fatherland as the world’s most powerful country are firm and unshakable. That is why our army and people launched into the general onward march of the New Year like a mountain, overflowing with a far-reaching ambition and the conviction of a final victory. Here, it is none other than the party cells that stand in a vital position. When all the party cells of the entire party more deeply engrave the New Year’s address of the respected and beloved marshal in the tens of millions of hearts, establish right countermeasures to implement the task, and fully stir up the spiritual power of the tens of millions of soldiers and people in the lead of the advancing ranks, our party’s leadership will throw more rays as an ever-victorious leadership.

Party cells are the basic units linking the blood vessel between the party and the masses.

The invincibility and future of the party depends on receiving the absolute support and trust of the people. A party that has taken a deep root among the broad popular masses, a party that rests on a firm popular basis remains unmoved in any raging wind. As the people are eternal, a party that links the blood vessel of fate with the people is eternally sure to win and is invincible.

Today, our party’s politics of attaching importance to the people and loving the people has reached a sublime state. Our party’s bosom is the bosom of trusting and putting forward the tens of millions of soldiers and people as revolutionary comrades, revolutionary comrades-in- arms, and glorifying their valuable life as the warriors and disciples of the great generalissimos. The leadership traits of our party, which protects and takes care of the people’s fate to the last and regards the people’s interests and convenience as an absolute priority, warmly touch the hearts of all the people, and the single-hearted devotion of the people following the motherly party is more deeply instilled.