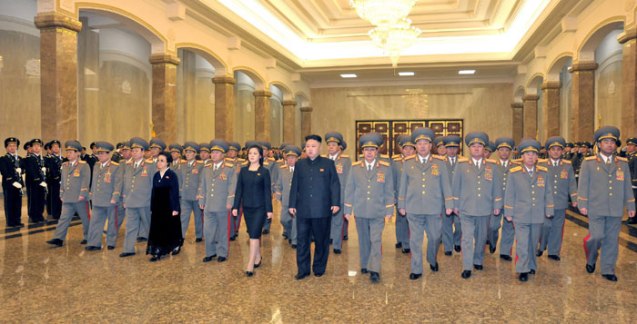 Kim Jong Un (C) pays his respects to statues of his father Kim Jong Il and his grandfather Kim Il Sung at Kumsusan in Pyongyang on 16 February 2013. (Photo: Rodong Sinmun)

A floral basket from Kim Jong Un in front of statues of his grandfather Kim Il Sung and father Kim Jong Il at Ku’msusan in Pyongyang on 16 February 2013 (Photo: Rodong Sinmun)

Kim Jong Un and assembled company visited the statue hall for a ceremony at which an honor guard saluted the statues of Kim Il Sung and Kim Jong Il and a sereis of floral baskets were placed before the statues.  KJU “entered the hall of immortality where Kim Jong Il lies in state” and “together with the participants, made bows to Kim Jong Il in the humblest reverence.”  After paying their respects, Kim Jong Un and members of the central leadership visited the exhibition of KJI’s personal affects and personal vehicles.

A statue of late DPRK founder and president Kim Il Sung and late leader Kim Jong Il unveiled on the campus of the Mangyo’ngdae Revolutionary School in Pyongyang on 16 February 2013 (Photo: Rodong Sinmun)

The new statue (L) replaces an older statue of Kim Il Sung that had been on Mangyo’ndae Revolutionary School campus for a number of years. The old KIS statue can seen in these images from Kim Jong Un’s visit to the school in early 2012 (C) and in the background in a photo from a DPRK publication from the 1960s (R) (Photos: Rodong Sinmun, KCTV screengrab and Foreign Languages Publishing House)

Kim Jong Il deemed it as an important work for giving steady continuity to the bloodline of revolution to educate the children of revolutionary martyrs from the first day of his revolutionary leadership and paid deep attention to the work of the school in the grim days of leading to victory the confrontation with the U.S. and the struggle for defending socialism under the uplifted banner of Songun.

It was the unanimous desire of all teachers and pupils of the school and service personnel of the KPA to erect the statue of Kim Jong Il at the school where people erected Kim Il Sung’s statue for the first time in Korea at the initiative of anti-Japanese war hero Kim Jong Suk who took into consideration the ardent desire of the schoolers to see Kim Il Sung every day.

The ardent desire of the teachers and pupils and all service personnel has become a brilliant reality thanks to the intense loyalty and meticulous guidance of Marshal Kim Jong Un.

Rosy is the future of the children of revolutionary martyrs, the speaker said, calling for waging a dynamic struggle to reunify the country and accomplish the Juche-based revolutionary cause of Songun under the leadership ofKim Jong Un, the banner of eternal victory of the great Paektusan nation, as befitting the descendants of Generalissimo Kim Il Sung and the soldiers and disciples of Generalissimo Kim Jong Il.

After the speaking program, according to KCNA, Kim Jong Un “warmly acknowledged the cheers of all the participants.”

According to the official chronicles Kim Jong Il was born in a small wood house near Mt. Paektu on 16 February 1942.  According to Russian records, Kim Jong Il was born in February 1941 on a military base in Khabarovsk which housed members of the 88th Sniper Brigade under the Soviet Far East Command, of which KJI’s parents Kim Il Sung (1912-1994) and Kim Jong Suk (1917-1949) were members.  KJI grew up among Koreans, Korean-Chinese and Russians stationed on the base and was called by his Russian name Shura (or Yuri)  In his early childhood, KJI saw very little of Kim Il Sung, who traveled to Moscow twice or who was otherwise recovering from injuries and illnesses.  In 1944 Kim Jong Suk gave birth to a second son, Kim Pyong Il (whose Russian name was Alexandre), who died in 1947 after he drowned in a water retention pond at the family’s residence in Pyongyang.  In 1946, in Pyongyang, Kim Jong Suk gave birth to her last surviving child, daughter Kim Kyong Hui, currently a KWP Secretary and Department Director and one of the most powerful members of the DPRK elite.  Kim Jong Suk passed away in September 1949 due to complications from an extra-uterine pregnancy.

In an interesting move to commemorate the official 71st anniversary of Kim Jong Il’s birth, a new statue of KJI and his father was unveiled on the campus of the Mangyo’ngdae Revolutionary School.  There are a number of statues of Kim Il Sung (and as of 2012, KJI) around the DPRK, since the inception of the cult around Kim Il Sung and the Mangyo’ngdae Family (KIS, KJI, KJS and KJU).  However, the construction of the first known KIS statue and its dedication were initiated by Kim Jong Suk with the first KIS statue placed on the campus of the Mangyo’ngdae Revolutionary School in 1947 (“where the statue of the Suryo’ngnim [KIS] was reverently built for the first time in our country by the suggestion of Comrade Kim Jong Suk–an anti-Japanese hero–who kindly took note of the ardent wish of the students of the school who want to see the fatherly leader every day”).

Pyongyang watchers might also note the manner of dress of members of the core leadership at the visit to Ku’msusan and the statue dedication.  On the visit to Ku’msusan, senior male officials were attired in variants of the KPA dress uniform.  At the statue unveiling ceremony, some senior officials were attired in the clothing of senior party officials.  Also note that at Ku’msusan, Jang Song Taek stands at Kim Jong Un’s left in the image (Ri Sol Ju stands at KJU’s right), the same position at which he stood when KJU visited the memorial palace on 24 December 2012.

One of the most notable senior officials attending both events was Gen. Kim Jong Gak.  Gen. Kim (who was seemingly reduced in rank from Vice Marshal) joined KJU on his visit to Ku’msusuan and stood in the front row with KJU and other senior officials.  Kim Jong Gak also attended the national report meeting commemorating KJI’s at Pyongyang Indoor Stadium on 15 February (Friday), where he was seated on platform (rostrum) in the front row.  In November Kim Jong Gak was removed from his previous position as Minister of the People’s Armed Forces, and replaced by Gen. Kim Kyonk Sik.