DPRK state media reported on 18 February (Monday) that Kim Jong Un (Kim Cho’ng-u’n) sent a floral basket to the funeral of Kim Rak Hui (Kim Rak-hu’i; Kim Nak-hu’i), a former DPRK Cabinet Vice Premier and Alternate (candidate member) of the Korean Workers’ Party [KWP] Political Bureau.  According to KCNA, KJU expressed “deep condolences over her death.”  Kim Rak Hui made her last reported public appearances in early March 2012 when she attended a national meeting and concert held to celebrate International Women’s Day.  During the 5th session (plenum) of the 12th Supreme People’s Assembly [SPA] she was removed from office as Vice Premier and during the 4th Party Conference was removed as a Political Bureau Alternate in April 2012.  At the time of her removal from her positions, it had been speculated that she was part of a wave of dismissals and demotions that occurred after Kim Jong Un formally assumed the supreme leadership of the DPRK.  It appears now that it was due to her declining health and age.

According to KCNA, Kim Rak Hui was born in Kaechon**, South P’yo’ngan Province on 11 November 1933 and attended the University of National Economics.  During most of her career, she worked as a manager in the country’s cooperative farming system and rural management committees.  In the 1950s she served as chairwoman of the Ponghwa Kaechon Agricultural Committee and supervised war-time rationing and food distribution during the Korean (Fatherland Liberation) War.  She also led post-war reconstruction efforts in Kaech’o’n’s agricultural sites, for which she was awarded the state title of Labor Hero in 1955.  Her service during the war earned her the attention of then-leader Kim Il Sung.  She was elected a deputy (delegate) to the 2nd Supreme People’s Assembly in 1957, re-elected in to the 3rd SPA in 1962 and the 4th SPA in 1967.  In January 1965 she Kim Rak Hui concurrently served as chairwoman of the Kaech’o’n County KWP Committee and the Kaech’o’n County Agricultural Management Committee.  She was elected a member of the Party Central Committee at the 5th Party Congress in November 1970 and was re-elected to the 5th SPA in 1972.  She was a member of the Budget Committee of the 5th SPA.  During the 1970s she served as chairwoman of the North Hwanghae Province Rural Management Committee.  During the 7th session (plenum) of the 5th SPA held during 26-29 April 1977, Kim spoke in favor of passage of the Land Law of the DPRK.

At the 6th Party Congress in October 1980 Kim Rak Hui was downgraded to Alternate (candidate member) of the Party Central Committee.  In the early 1980s she served as the Chair of the Kaeso’ng City People’s Committee.  In 1990 she was appointed Chairwoman of the South P’yo’ngan Rural Management Committee.  In 1997 she was appointed deputy (vice) director of the KWP Agriculture Department (currently part of the KWP Finance and Planning Department), but continued to serve as an advisor to the South P’yo’ngan Rural Management Committee.  In 1994 Kim Rak Hui was a member of Kim Il Sung’s Funeral Committee  and in 1995 was a member of O Jin U’s funeral committee.  In celebrating International Women’s Day in 1999, DPRK state media identified her as “Korean women performed brilliant feats in the efforts to build a prosperous socialist country after the cease-fire.  Among them were women farmers across the country including Kim Rak Hui, who earned fame as a plough-girl in the wartime. . .”

Kim Rak Hui returned to political office in 2003 when she was elected a deputy (delegate) to the 11th SPA.  In June 2005 was was appointed Chief Secretary of the South Hwanghae Provincial KWP Committee.  She was elected to the 12th SPA and was attended Kim Jong Il’s guidance tour of the Chaeryo’ng Mine in March 2009.  In June 2010, Kim Rak Hui was appointed DPRK Cabinet Vice Premier during the 3rd session of the 12th SPA.  Kim was one of several provincial party secretaries appointed to serve either as Vice Premiers or leading officials of the Party Central Committee in June 2010 which included South P’yo’ngan Provincial Chief KWP Secrtary Ri Tae Nam’s appointment as Vice Premier, North Hamgyo’ng Provincial Chief KWP Secretary Hong Sok Hyong appointed as director of the KWP Finance and Planning Department and South Hamgyo’ng Provincial Chief KWP Secretary Tae Jong Su as director of the KWP General Affairs Department.  Kim Rak Hui (along with these other elites) was subsequently elected to the KWP Political Bureau during the 3rd Party Conference on 28 September 2010. 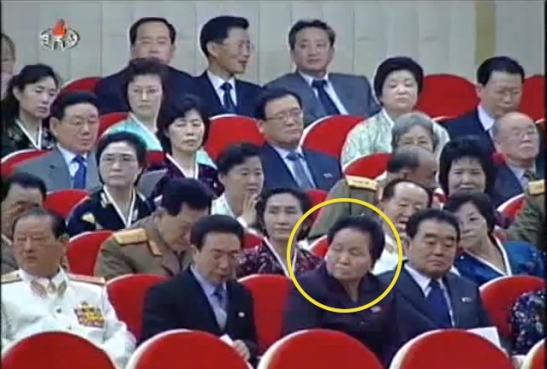 Kim Rak Hui (annotated) attends the U’nhasu Orchestra concert to mark International Women’s Day on 8 March 2012, one of her last reported public appearances prior to her death (Photo: KCTV screengrab)

From February to April 2011 Kim Rak Hui successfully led a Cabinet-level committee formed in response to an outbreak of foot-and-mouth disease [FMD] and  other potential epizootic outbreaks in the DPRK.  On 19 December 2011 she was listed at #21 on the national funeral committee formed after the death of Kim Jong Il.  Kim continued to make public appearances at national meetings and cultural events, and presided over awards presentation ceremonies.  Her last public appearances were at a national meeting at the People’s Palace of Culture and a concert by the U’nhasu Orchestra (attended by Kim Jong Un), both marking International Women’s Day.  She was quietly removed as DPRK Vice Premier in April 2012.

30 October 2012 meeting of war veterans and the leading officials of Kim Il Sung Youth League chapters of the Korean People’s Army, an event at which Gen. Kwon Sang Ho spoke of his experience during the Korean War. Gen. Kwon passed away in February 2013 (Photos: KCTV screengrabs)

Kim Rak Hui was not the only DPRK elder to have recently passed away.  On 14 February DPRK state media reported that Kim Jong Un also sent flowers to the funeral for Gen. Kwon Sang Ho, a Korean (Fatherland Liberation) War hero and lecturer at the Victorious Fatherland Liberation War Museum in Pyongyang.  Gen. Kwon’s last reported public appearance in state media was in October 2012 when he attended a meeting of the leading officials of the Kim Il Sung (Socialist) Youth League’s committees in the Korean People’s Army [KPA].  According to KCNA Gen. Kwon, and other war veterans, “told stories about how bravely they fought, cherishing warm love for the country liberated by Kim Il Sung and burning hatred for the enemy.”

On 20 February (Wednesday) DPRK state media released a new item detailing Kim Rak Hui’s career and accomplishments, identifying her as the “initiator of the plowwoman movement”:

Born in a rural community in South Phyongan Province, she worked as a weaver in her teens.

She began the plowwoman movement in March Juche 40 (1951) to contribute to supplying food to the People’s Army in the war. She attended a meeting of frontrunner farmers held in 1952 and was highly praised by President Kim Il Sung for her devoted service.

Later, she was honored to receive a letter of thanks from the President for her big contributions to providing much relief food to the warfront.

In the post-war period, she overfulfilled grain output quota each year, as the chairwoman of an agricultural cooperative.

Under deep trust of the President and leader Kim Jong Il, she became a deputy to the Supreme People’s Assembly and had worked as chairwoman of a county cooperative farm management committee, chairwoman of a provincial rural economy committee, deputy director of the C.C., Workers’ Party of Korea, chief secretary of the South Hwanghae Provincial Committee of the WPK, and vice-premier and honorary councilor of the DPRK Cabinet.

She was awarded a lot of state citations, including Order of Kim Il Sung, Order of Kim Jong Il, title of Labor Hero and Order of National Flag 1st Class.

Some days ago, the dear respected Kim Jong Un sent a wreath to the bier of Kim Rak Hui to express his deep condolences over her death. –