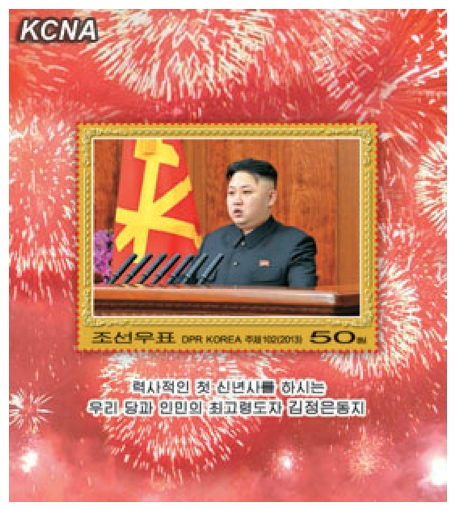 DPRK state media reported on 20 February (Wednesday) that the State Stamp Bureau issued a sheetlet of stamps, which included one of Kim Jong Un (Kim Cho’ng-u’n) delivering the New Year’s Day Address on 1 January 2013.  According to KCNA “the sheetlet is made up of four individual stamps featuring the tasks set forth in the New Year address, on the theme of ‘Let us bring about a radical turn in the building of an economic giant with the same spirit and mettle as were displayed in conquering space!’, the slogan laid down in the New Year address.”  KCNA also reported that other stamps “with serviceperson, worker, peasant and student arm in arm pictured with letters reading ‘The great Kimilsungism-Kimjongilism’, shows the fixed will of the Korean army and people to increase the political and military might of the country in every way, rallied closer around the Workers’ Party of Korea, this year marking the 65th DPRK birthday and the 60th anniversary of the victory of the Korean people in the Fatherland Liberation War” and one stamp is “on the subject of ‘Agriculture and light industry constitute the main front in this year’s economic construction’ stresses the idea that a production upsurge should be effected in coal, power and metal industries and railway transport, the four major leading sectors of the national economy, and a springboard for building an economic power should be laid by dint of science and technology.”

According to KCNA, “two other stamps carry the ideas that building a highly civilized country should be sped up to open up a fresh age of civilization in the 21st century and Korea’s reunification be realized on the basis of priority to the nation’s interests and the stand for national unity through removal of confrontation between the north and the south and implementation of the north-south joint declarations.”

On 20 February Japanese-based DPRK media outlet Choso’n Sinbo reported that “According to a relevant official, this is the first instance in the nearly 70-year history of North Korean postage stamps that a stamp bearing the image of the supreme leader giving the New Year’s address has been issued.  Small stamps sized 75 x 85 mm and 51 x 39 mm respectfully contain an image of the marshal giving the New Year’s address to all the people on the first morning of the New Year and says, “Comrade Kim Jong Un, supreme leader of our party and people, delivering the historic first New Year’s address.”  Choso’n Sinbo also reported that “On stamps with content on striving toward building a socialist civilized country, a soccer player and a Moranbong Band musician were depicted, and on a stamp on the theme of fatherland reunification, the words ‘resolution of confrontation between North and South,’ ‘the nation first,’ ‘placing importance on the nation,’ ‘national unity,’ and “implementation of the 15 June Joint Declaration and 4 October Declaration” were prominently inscribed, along with a map of Korea and a picture of a dove, the symbol of peace” and “Stamps on themes saying ‘Agriculture and light industry are the main fronts of this year’s economic construction’ and ‘Strengthen political and military might in every way’ represent the tasks of the four leading sectors of the people’s economy — including coal, electric power, metals, and rail transport — the launch of practical satellites, and the Sep’o Tableland reclamation battle.”