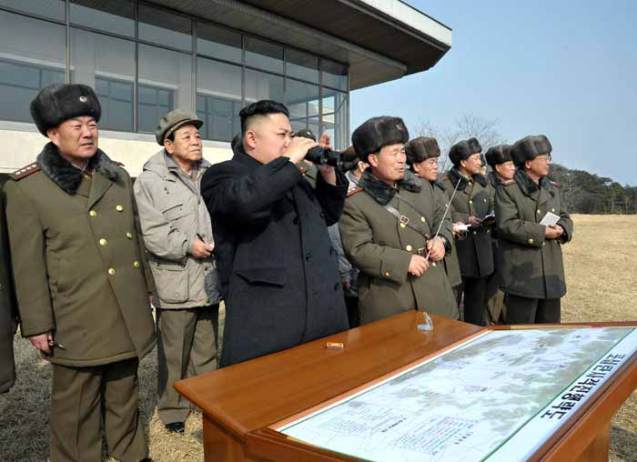 Kim Jong Un was briefed about the unnamed unit’s deployment and training, then ordered the exercises’ commencement.  According to KCNA “an endless barrage of shells were fired by artillery pieces on the “enemy’s positions,” their roar rocking heaven and earth, and all of them were enveloped in flames” and KJU “was satisfied with the shells accurately hitting the targets” and seeing “‘enemy positions’ in flames.”  Kim Jong Un “noted that if the drill leads to an actual battle, the enemies will be hit so hard by the retaliatory strikes of the infuriated powerful revolutionary army of Mt. Paektu that they would not be able to raise their heads again” and “highly praised the artillerymen for their successful drill.”  According to KCNA KJU said that “he was examining the preparedness of units for an actual battle after issuing an order all of a sudden, adding that the drill once again convinced him that all the officers and men of the army are waiting for an order of the supreme commander for a final attack, keeping themselves in maximum alert” and ” set forth important tasks to be carried out by the army to make thorough preparations to go into action.”  KJU also “clarified in detail issues of further modernizing the artillery force to cope with the escalating reckless maneuvers of the enemies for a war of aggression” and “emphasized that the artillerymen should always be ready to open fire to hit the targets anytime an order is issued and deal merciless blows at the enemies when they preempt firing.”

Kim Jong Un also inspected “military hardware newly developed by the army” before attending a commemorative photograph session with KPA service members and officers who participated in the exercises.

Kim Jong Un’s next reported public appearance was his attendance of a concert by the State Merited Chorus (Merited State Choir) at the People’s Theater in central Pyongyang.  Attending the concert with him was the same group of KPA senior commanders that observed the live fire artillery exercises, with the addition of VMar Kim Jong Gak.  The State Merited Chorus performed a concert title “Korea Does What It is Determined to Do” and KJU watched it with KPA service members and officers.  The chorus’ concert was also performed on 22 February (Friday) for participants in the 12 February 2013 nuclear test, as part of their ongoing visit to Pyongyang.  The concert began with an instrumental and chorus “Song of the Korean People’s Army.”  KCNA reported that other songs performed included “The Glorious Motherland,” “The General Will Live Forever as the Sun,” “We Will Defend Marshal Kim Jong Un with Our Lives,” “Korea Does What It is Determined to Do” and “Peace is Guaranteed by Our Arms” and that the “performers sang high praises of boundless reverence for the great Generalissimos Kim Il Sung and Kim Jong Il, who built up the strong national power of Military-First (So’ngun) Korea, and matchless courage and grit and outstanding leadership art of Kim Jong Un, who is steering the all-out action of all service personnel and people to protect the sovereignty of the country.”

Kim Jong Un said, “The performance of the chorus makes everybody feel refreshed and reminds one of the volley firing by multiple rocket launch system, adding that it once again reinforced the belief that one should carry on the revolution, tightly holding arms,” according to KCNA and he “expressed his expectation and conviction that the creators and artistes of the State Merited Chorus would inspire the service personnel and people to wage a dynamic struggle for a final victory in the future, too through its revolutionary and militant performing activities.” 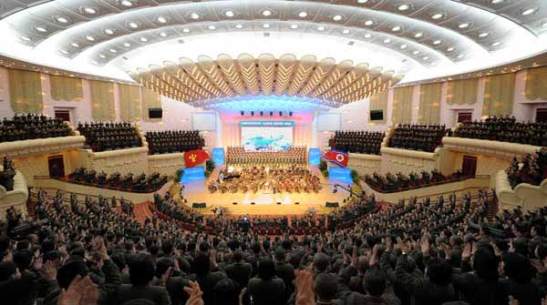 Concert by the State Merited Chorus entitled “Korea Does What It is Determined to Do” at the People’s Theater in Pyongyang (Photo: Rodong Sinmun)