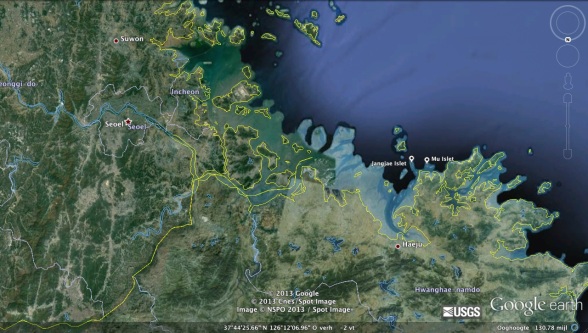 Overview from the south of the area in the West Sea between the DPRK and South Korea where Kim Jong Un conducted field inspections of Jangjae and Mu Islet defense units (Photo: Google image)

KJU’s first inspection to Jangjae Islet’s defense unit.  He toured the unit’s barracks and a classroom before going to an observation area overlooking the South Korean [ROK] island of Taeyo’np’yo’ng Island (Daeyeonpyeong-do, the “big” island) to ” hear a detailed report on the modernization of the post and the enemy targets.”  According to KCNA Kim Jong Un  said “Jangjae Islet is one of the islets to which he attaches greatest importance as it is located in the southernmost part in the southwestern sector of the front, adding that once a battle breaks out, the soldiers of the detachment should play a big role” and he “stressed the need for the soldiers to keep themselves fully ready to go into action to annihilate the enemy any time an order is issued and instructed them to deal deadly blows at the enemies and blow up their positions if they fire even a single shell at the territorial waters or land of the DPRK.”  Following his inspection and debriefing, he posed for a commemorative photo with KPA service members and officers serving on Jangjae Islet.

KJU’s next inspection occurred on Mu Island.  KJU previously visited the island defense detachment on Mu Islet in August 2012.  He went to an observation post “feasting his eyes on Taeyo’np’yo’ng Island with keen attention” and was briefed by the unit commander “on terrain conditions, distribution of forces and combat preparations of the detachment.”  According to KCNA he “reconfirmed in detail reinforced firepower strike means and targets of the enemy deployed on five islets in the West Sea including Yo’np’yo’ng Island defence unit and defined the order of precision strikes” and ” gave detailed instructions to more satisfactorily equip the detachment with weaponry, increase the density of firepower on targets and ensure intensive shelling in order to cope with the frantic arms build-up of the enemy entrenched under the very eyes of the soldiers.”  Kim Jong Un was briefed about “about the issue of providing army surgeons at the wartime suited to the specific conditions of the detachment and the issue related to the proposal for operation and combat.”  KJU was “greatly satisfied to learn about the preparations for combat readiness of the Jangjae Islet Defence Detachment and the Mu Islet Hero Defence Detachment.”  He also posed for commemorative photographs with KPA service members and officers, and their family members, stationed on Mu Islet. 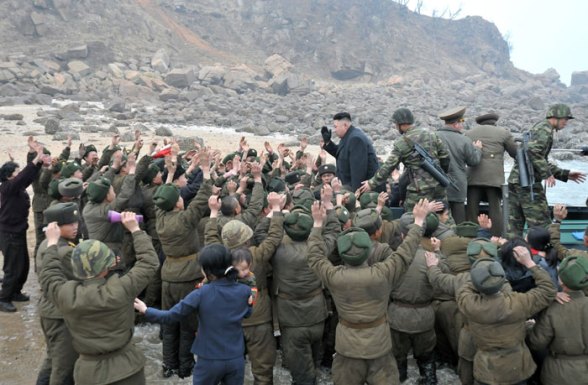 Kim Jong Un disembarks from a transport vessel, greeted by KPA service members and officers, and their family members, on an islet in the West Sea. Seen behind Kim Jong Un are two close protection escorts strapped with automatic rifles and two other executives of KJU’s bodyguard staff (Photo: Rodong Sinmun)

According to KCNA Kim Jong Un said  “that as he stressed during the previous inspection, this is not only the biggest hotspot in waters off the Korean Peninsula but a very sensitive area on which world attention is focused and where interests of many countries are intertwined” and “ordered the soldiers of the detachments to watch every move of the enemy with vigilance and promptly deal deadly counterblows at him if a single shell is fired on the waters and land where the DPRK’s sovereignty is exercised and thus make the first gunfire and shoot a signal flare for a great war for national reunification.”  Kim Jong Un also remarked that ” all the service personnel of the ground, naval, air and anti-air and strategic rocket forces including the frontline units are fully ready to fight a Korean style all-out war” and said “if the enemy makes any slight reckless provocation against the DPRK again in the sensitive waters, he will issue an order to start the just great advance for national reunification in all frontline areas, never missing the golden opportunity.”