DPRK state media reported on 20 March (Wednesday) that Kim Jong Un (Kim Cho’ng-u’n) observed and commanded a Korean People’s Army [KPA] live fire drill using flak rockets and drones.  KJU’s last reported public appearance was his attendance was in Pyongyang on 19 March (Tuesday) at a commemorative photo session with participants at a national meeting of light industry workers.  At the drills Kim Jong Un was joined by VMar Choe Ryong Hae (Director of the KPA General Political Department), Lt. Gen. Pak Jong Chon (Staff member of the KPA Supreme Command) and Lt. Gen. Son Jong Nam.  Upon his arrival at the drill site, KJU was greeted by Gen. Ri Pyong Chol, commander of the KPA Air and Anti-Air Forces, was briefed about the drills and ordered them to begin. 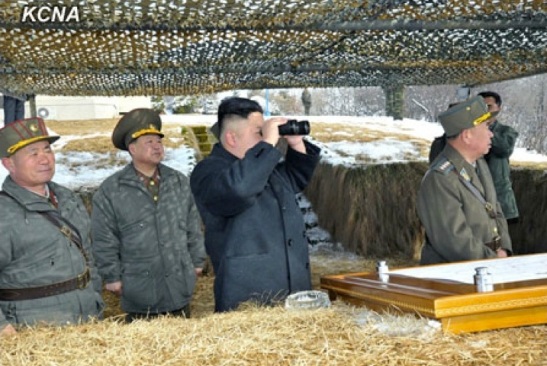 The first phase of the drills involved drones which took off toward “enemy positions” which KCNA reported “stormed the targets, destroying them with accuracy.”  According to KCNA, Kim Jong Un said, “that the planes are very fast and have high target discerning ability.  The planes were assigned the flight route and time with the targets in south Korea in mind,” and “that they were was proved to be able to mount super precision attack on any enemy targets.”  DPRK state media has previously shown small unmanned aerial vehicles during military parades and at one of KJU’s inspections in 2012, but it is not clear if the KPA possesses a working drone.

The next phase of the drill involved self-propelled anti-aircraft “flak rockets” aimed at ” a target disguised as Tomahawk cruise missile of the enemy.”  KCNA reported that ” an outburst of fire with roaring blast flew toward the missile, destroying it at a single shot.”  KJU was pleased with the anti-aircraft drill and “called for further raising the performance of drone and rocket which demonstrated their might in the drills and urged the soldiers to get fully ready to mount super precision strike at any target any time,” according to KCNA.  Kim Jong Un also said:

When the drills turn into a battle, the enemies will be made to drink a bitter cup, unable to raise their heads, in the face of retaliatory blows of the strong revolutionary  Mt. Paektu (Paektusan) army.  If the enemies, oblivious of the tremendous might of the KPA, make even the slightest movement, [I] will give an order to destroy not only the military installments and puppet reactionary ruling institutions in the operational theater in south Korea but the relevant facilities of countries following the U.S. war moves for invading the DPRK, and the military bases of the U.S. imperialist aggression forces in the operational theatre of the Pacific.  Time has gone when only words were made, stressing the need to destroy the enemies without mercy so that not a single man can survive to sign a document of surrender when a battle starts.

KCNA reported that KJU “stressed the need to have at command the coordinates of every enemy target in the operational theater of south Korea and input them in precision drone attack means of the Korean style so that they should make point attack on any target any moment” and ” set forth important tasks in making full combat preparations of the KPA as required by the prevailing situation.”  Before participating in a commemorative photograph session with participants in the drill, Kim Jong Un “called on all the service personnel of the KPA to maintain high alert posture and wait for his order for the grand advance for national reunification.”

Kim Jong Un’s inspection and commanding of the anti-air drills occurred after the US B-52 bomber participated in training mission on 8 March and 19 March (Tuesday) as part of the joint US-ROK joint military exercises Foal Eagle.  During Tuesday’s training exercises flight the B-52 flew over South Korea’s [ROK] Kangwo’n Province.  As Kim Jong Un observed the anti-aircraft drills, a spokesman of the DPRK Foreign Ministry protested  the use of the B-52 as “an unpardonable provocation against the DPRK to sound out its strongest will that the U.S. is introducing a strategic nuclear strike means into the Korean Peninsula at a time when its situation is inching close to the brink of war.”  According to the Foreign Ministry’s spokesman:

The U.S. reportedly let its B-52 deployed on Guam make sortie to the Korean Peninsula on Mar. 19 in the wake of its sortie made on Mar. 8.

U.S. Deputy Secretary of Defence Carter visited south Korea on March 18, where he was closeted with south Korean puppet Minister of Defence Kim Kwan Jin over “south Korea-U.S. joint reaction” to the DPRK’s threat. There Carter said that B-52 would be involved in the U.S.-south Korea joint military drills on Mar. 19 to demonstrate the U.S. will to defend south Korea and that such sorties would continue in the future.

It is an unpardonable provocation against the DPRK to sound out its strongest will that the U.S. is introducing a strategic nuclear strike means into the Korean Peninsula at a time when its situation is inching close to the brink of war.

The DPRK is now closely watching the move of B-52, and the hostile forces will never escape its strong military counteraction, should the strategic bomber make such sortie to the peninsula again.