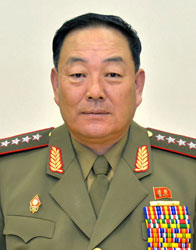 Graphic of the control channels of the KPA General Staff. Some of what DPRK state media calls “strategic rocket” units reside at the corps level, but are commanded by the KPA Strategic Rocket Force Command. The green line indicates dual command between the NDC and CMC (Graphic by Michael Madden/NK Leadership Watch)

DPRK state media released a statement (tamhwa) on 4 April (Thursday) from a spokesman from the Korean People’s Army [KPA] General Staff which said the “”the towering resentment of the DPRK’s army and people has reached an irrepressible phase as they are all out in the all-out action to defend the sovereignty and prevent a nuclear war of the U.S.” and that “no one can say a war will break out in Korea or not and whether it will break out today or tomorrow.”  The KPA General Staff also announced that it is “in charge of all operations will take powerful practical military counteractions in succession as the KPA Supreme Command had already solemnly declared internally and externally.”

According to the KCNA, the KPA General Staff’s spokesman statement said:

A touch-and-go situation is prevailing on the Korean Peninsula.

U.S. formation of B-52s based on Guam flew into the sky above South Korea all of a sudden to stage a drill under the simulated conditions of a nuclear strike at the DPRK and formations of F-22s took off from Japan proper and Okinawa and were deployed in the Osan air force base in south Korea to watch for a chance to make a surprise strike.

It was reported that super-large nuclear-powered aircraft carrier and its group will enter the waters off the Korean Peninsula soon after leaving waters of the Indian Ocean or the western coast of the U.S. mainland.

South Korea and waters around it are turning into places for display of various types of nuclear strike means of the U.S. imperialist aggressor forces and a dangerous hotbed of a nuclear war in the true sense of the word.

The U.S. high-handed hostile policy toward the DPRK aimed to encroach upon its sovereignty and the dignity of its supreme leadership and bring down its social system is being implemented through actual military actions without hesitation.

Days and months have passed on this land amid the constant danger of war but never had the whole Korean Peninsula been exposed to such danger of a nuclear war as today.

Under this situation the towering resentment of the DPRK’s army and people has reached an irrepressible phase as they are all out in the all-out action to defend the sovereignty and prevent a nuclear war of the U.S.

In view of the prevailing situation the world people who love justice and value conscience are unanimously becoming critical of the U.S. and its followers for their disgraceful behavior of prodding the UN Security Council into adopting “resolutions on sanctions” against the DPRK and vocal expressing concern over the situation on the peninsula.

The moment of explosion is approaching fast.

The responsibility for this grave situation entirely rests with the U.S. Administration and military warmongers keen to encroach upon the DPRK’s sovereignty and bring down its dignified social system with brigandish logic.

In view of this situation, the KPA General Staff in charge of all operations will take powerful practical military counteractions in succession as the KPA Supreme Command had already solemnly declared internally and externally.

We have already sent a strong message to the present puppet authorities and military of South Korea following in the footsteps of traitor Lee Myung Bak so that they may understand our position.

As a matter of fact, puppet military gangsters such as Kim Kwan Jin are human rejects not worth becoming targets of the DPRK’s revolutionary armed forces.

We formally inform the White House and Pentagon that the ever-escalating U.S. hostile policy toward the DPRK and its reckless nuclear threat will be smashed by the strong will of all the united service personnel and people and cutting-edge smaller, lighter and diversified nuclear strike means of the DPRK and that the merciless operation of its revolutionary armed forces in this regard has been finally examined and ratified.

The U.S. had better ponder over the prevailing grave situation.