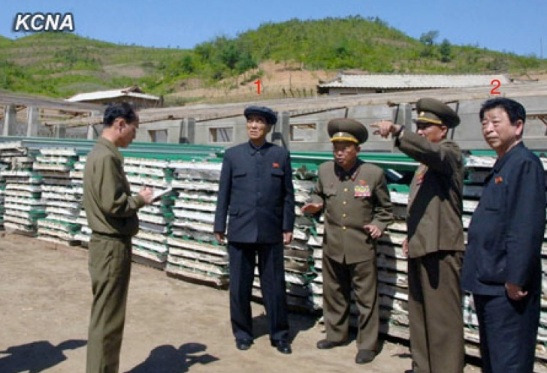 DPRK state media reported on 23 May (Thursday) that DPRK Cabinet Premier Pak Pong Ju visited the construction of the Korean People’s Army [KPA] Breeding Station #621, which will breed grass-fed livestock such as goats.  Kim Jong Un (Kim Cho’ng-u’n) was reported on 20 May (Monday) to have visited the breeding station and initiated its construction.  After KJU’s visit, the construction project was described as “the soldier-builders are bringing about innovations in every construction site in order to build the station at the highest level.”  Pak, joined DPRK Vice Premier and State Planning Commission Chairman Ro Tu Chol, toured the buildings under construction by KPA service members and “encouraged them” before convening a meeting of KPA construction managers and personnel.  According to KCNA, Pak “underscored the need to step up the construction of breeding pens, folds, a goat institute, dwelling houses, etc., bearing in mind the intention of Kim Jong Un, who made a long and tiresome journey to provide good diet to the soldiers.”  The meeting also “underlined the need to finish the construction of the breeding station as early as possible and called on the Cabinet and other relevant units to ensure a timely supply of necessary raw and other materials and fuel to the construction sites.”