Kim Jong Un stands at the bottom of a ski slope during his visit to the construction of the Masik Pass Skiing Grounds in Kangwo’n Province (Photo: Rodong Sinmun).

Construction of an area of the Masik Pass Skiing Grounds in Kangwo’n Province (Photo: Rodong Sinmun). 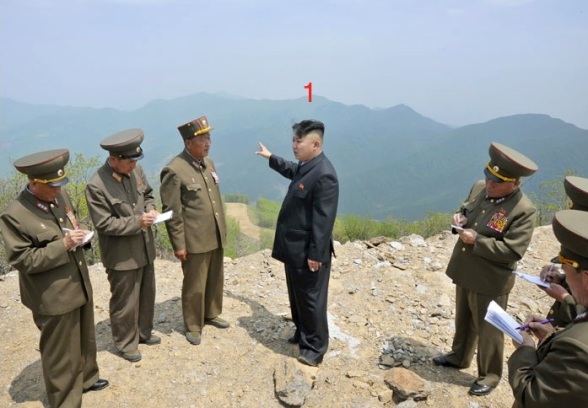 Kim Jong Un (1) talks with senior officials and KPA construction managers on a peak at the construction site of the Masik Pass Skiing Grounds in Kangwo’n Province (Photo: Rodong Sinmun).

KCNA reported that Kim Jong Un “gave instructions to properly build a drainage system to prevent the courses from being washed away by rain in the rainy season and plant turf of good species suitable for that area so as to keep the courses in good shape even after thaw.”  Kim Jong Un also said, “it is necessary to build well not only rest places but first- aid stations at starting, middle and final points of the courses and establish an automatic cableway monitoring system for a real time watch so as to take measures to prevent accidents” and “underlined the need to preserve ecological environment and prevent pollution while building the skiing ground.”  According to KCNA, he also “called for properly setting up a unit for operating the ground and scrupulously organizing its management from now while pushing ahead with the construction, and taking measures for the production of skis and other winter sports apparatuses” and “called on the relevant field to supply equipment and materials needed for construction in a responsible manner and pay deep attention to this work.”