With KPA Assets in Syria and Rumors of Moscow Trip, Gen. Kim Kyok Sik Remains PY Man of the Hour 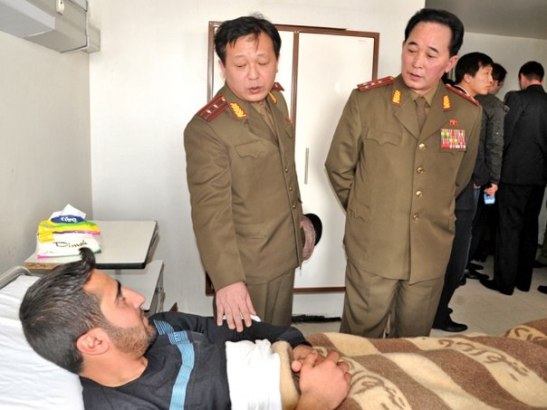 KPA officers meet a man injured during the Syrian civil war at a hospital in Syria in 2012 (Photo: SANA/NKLW file photo)

Al-Sharq al-Awsat reported on 3 June (Monday) that Arabic-speaking Korean People’s Army [KPA] personnel are serving as military advisers on artillery tactics and providing logistical support to the Syrian Armed Forces, currently defending the rule of Syrian President Bashar al-Assad in Syria’s ongoing civil war. Citing information from a pro-Assad militia,  Rami Abd-al-Rahman, director of the the Syrian Observatory for Human Rights,’ told Al-Sharq al-Awsat “that North Korean officers are taking part alongside the regular forces in the fighting in Aleppo” and that “the overall number of these officers is unknown but there are certainly between 11 and 15 North Korean officers and the majority of them speak Arabic. . .(they) are deployed at several fronts such as the defense factories southeast of Aleppo and at the regular forces’ bases inside the city itself.” He went on to point out that “these officers are not taking part in the field battles but offering logistical support in addition to drawing up the military operations maps. They are also supervising the regular army’s artillery shelling.”

The last observed, credible reports about DPRK military assistance to Syria during the unfolding civil war were in May 2012 and involved dedicated shipments of vehicle parts, munitions’ component parts and ordnance.  DPRK cargo vessel ODAI docked in the Syrian port cities of Latakiya and Tartus during 29 to 31 May 2012.  According to Haaretz, citing elements of the Syrian opposition, “North Korea is also continuing to send arms to Syria. The shipments arrive by air and sea and they are being paid by a special slush fund that the Iranian government set up for this purpose.”   The DPRK has made several public demonstrations of support to its embattled ally including meetings between DPRK and Syrian officials in July 2012, DPRK Vice Foreign Minister Pak Kil-yo’n referring to Syria’s civil war in an address to the United Nations General Assembly in October 2012 and a number of exchanges of gifts and congratulatory letters between President Assad and DPRK leader Kim Jong Un (Kim Cho’ng-u’n).

The DPRK began contacts and exchanges with Syria in the early 1960’s and established formal diplomatic relations in 1966.  Syria was the DPRK’s major conduit through which it provided military equipment, training and advisers to freedom fighter and radical Muslim groups in the Middle East and Africa from the 1960s on.  KPA assets assisted Syria during the October War (Yom Kippur War) in 1973 and provided support and participation, at Syria’s behest, in the Lebanese Civil War.  In 1982, KPA advisers were present when Syrian forces quelled an uprising in Hama and later that year KPA forces were deployed to Syria and Lebanon during the 1982 Lebanon War.  Since the 1970s the DPRK and Syria have had an extensive military exchange relationship which has included numerous arms shipments and the deployment of KPA strategic and logistical advisers.  The DPRK Foreign Ministry and DPRK state media have also publicly defended Syria, including issuing official denials that the two countries were cooperating on nuclear weapons development after the Israeli Air Force bombed an alleged nuclear facility in Syria on 6 September 2007.

One of the DPRK’s major players in its military relationship with Syria is current Chief of the KPA General Staff, Gen. Kim Kyok Sik.  Gen. Kim served as a deputy military attache at the DPRK Embassy in Damascus for almost decade starting in 1971.  Gen. Kim managed a number of military cooperation projects with the Syrian Armed Forces, including rehabilitating Syrian military forces in the mid-1970s and coordinating shipments of multiple-launch rocket systems and other military support to various radical organizations.  With the DPRK and its core leadership providing both public and substantial support to Syria during the civil war, and given Gen. Kim’s experience and extensive ties to Damascus, it is likely his recent public profile and switching one senior KPA position for another after six months are partially linked to the DPRK’s continued support for Syria.

Gen. Kim Kyok Sik was also rumored to to have been selected to lead a senior DPRK delegation on a visit to Moscow.  Kyunghyang Shinmun reported “Chief of the Korean People’s Army General Staff Kim Kyuk Sik is being tapped as the (North Korean) envoy and the number of the North’s delegation is likely to be six or seven” and that Gen. Kim and the delegation would arrive on or around 7 June (Friday), timed to occur whilst US President Barack Obama and Chinese President Xi Jinping meet in California.  On 3 June, Interfax quoted an anonymous official in the Russian Foreign Ministry that “no high-level visits are being planned at the moment” between the DPRK and Russia. 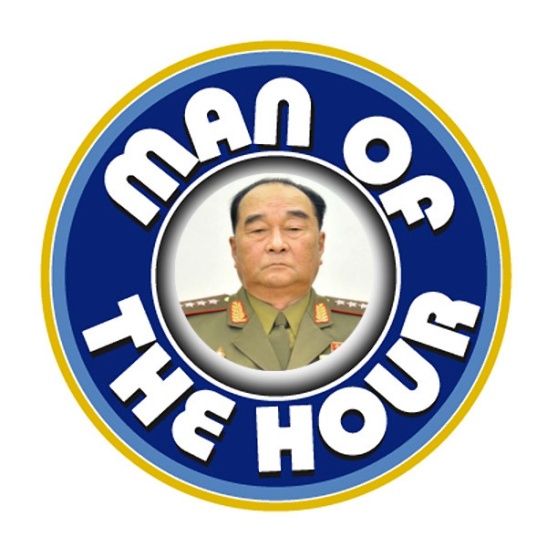 One comment on “With KPA Assets in Syria and Rumors of Moscow Trip, Gen. Kim Kyok Sik Remains PY Man of the Hour”