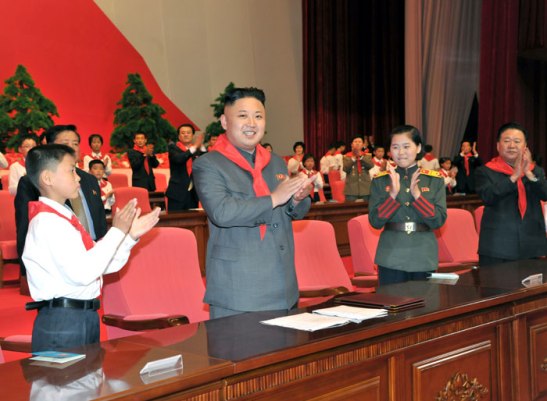 The Korean Children’s Union’s 7th Congress was held at the 25 April House of Culture.  The purpose of the KCU’s 7th Congress was “strengthening the KCU developed under the care of the great Generalissimos Kim Il Sung and Kim Jong Il into the Military-First (so’ngun) children’s revolutionary organization of the Workers’ Party of Korea.”  Attending the congress, according to KCNA, were “delegates selected from KCU organizations across the country, officials in charge of children’s life and other officials concerned,” and “as observers were children of servicepersons on Jangjae, Mu and Wolnae islets and other frontline posts and schoolchildren in Pyongyang.”  Kim Jong Un, described as “the benevolent father of the Korean schoolchildren,”  made his way to a VIP seating area and had the KCU’s red neckerchief tied around his neck.  He “congratulated the delegates on their enthusiastic cheers and warmly acknowledged all the participants in the congress.”

Kim Jong Un attends greets a member of the Korean Children’s Union (KCU) during the KCU’s 7th Congress held at 25 April House of Culture in Pyongyang on 6 June 2013 (Photo: KCTV-Yonhap) 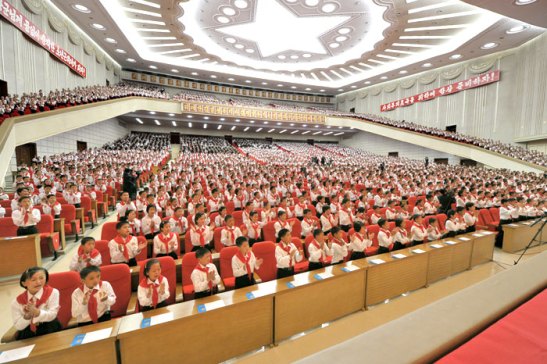 Participants in the 7th Congress of the Korean Children’s Union, held at the 25 April House of Culture in Pyongyang on 6 June 2013 (Photo: Rodong Sinmun). 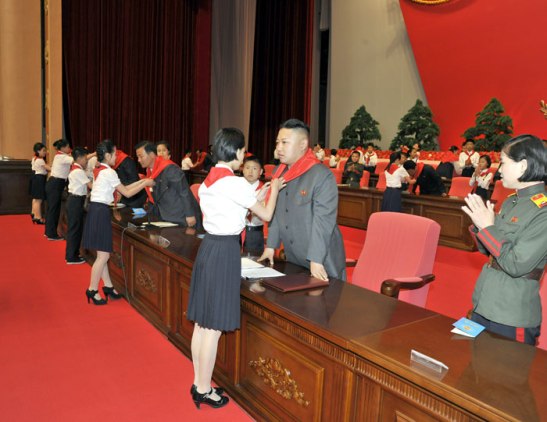 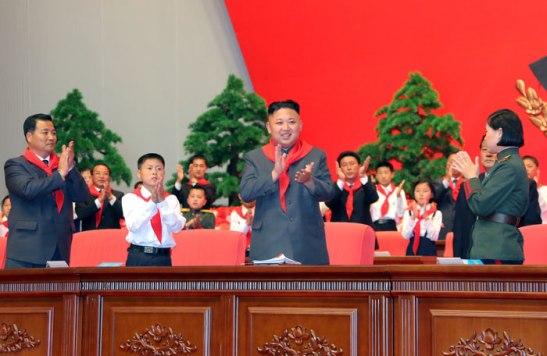 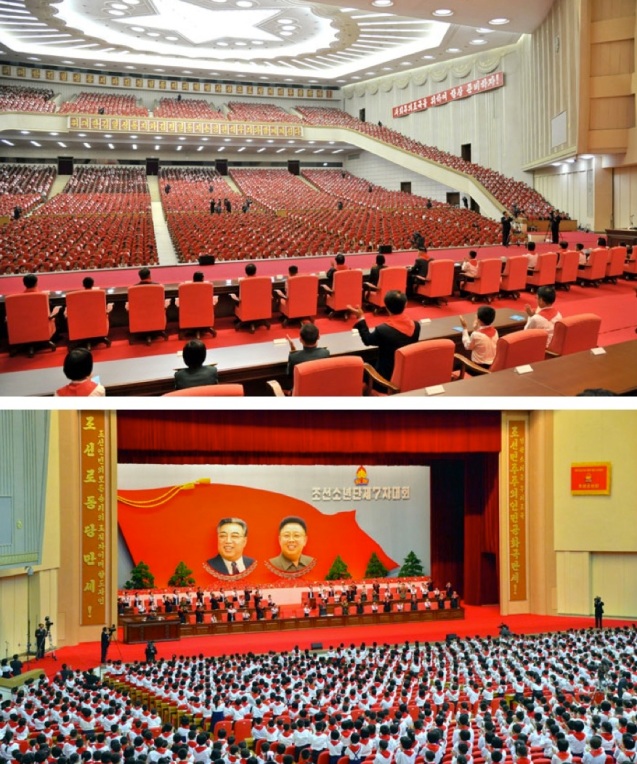 View of the Korean Children’s Union 7th Congress held at the 25 April House of Culture in Pyongyang on 6 June 2013 (Photos: Rodong Sinmun)

The KCU’s 7th Congress had two agenda items: 1.) “On the tasks of the KCU to bring up its members to be young revolutionaries and vanguard of the Military-First (so’ngun) Era always following the dear respected Marshal Kim Jong Un in firm conviction,” and 2.) revising the KCU’s bylaws.  Jon Yong Nam delivers a report on the first item on the agenda. According to KCNA, in his report Jon said “the glorious course of the KCU has been associated with the deep loving care of the Generalissimos who provided deep and firm roots for the Juche-oriented children’s movement and led the KCU step by step in line with the requirements of the developing revolution” and Jon “referred to the great successes of the KCU after the 6th congress under the sagacious leadership and meticulous care of Generalissimo Kim Jong Il and Marshal Kim Jong Un.”  The report “called upon the KCU members to cherish honor and pride of being members of glorious Kim Il Sung and Kim Jong Il’s KCU and firmly prepare themselves to be reliable successors of the military-first (so’ngun) revolution faithful to Kim Jong Un, true to their pledges before the KCU flags.”

After the meeting report, a series of KCU and KISYL speakers “talked about their honor of taking part in the congress in the presence of Marshal Kim Jong Un and their pride of acquiring ample knowledge, good moral character and good health under the deep care of the peerlessly great persons” and “vowed to carry forward the traditions of Mt. Paektu under the leadership of the Workers’ Party of Korea.”  According to KCNA, Kim Jong Un “heard with keen interest the speeches of delegates, warmly applauding them.”  KCNA reported that the first agenda item was adopted and that the second was “discussed and decided upon.”

Kim Jong Un and senior Kim Il Sung Youth League officials pose for commemorative photographs with participants of the 7th Congress of the Korean Children Union in front of the Mangyo’ngdae Schoolchildren’s Palace in Pyongyang on 6 June 2013 (Photos: Rodong Sinmun)

Kim Jong Un later attended a commemorative photo session with congress participants.  KCU members presented him with floral bouquets prior to the photo-op.  According to KCNA, Kim Jong Un said that “the congress marked an important occasion in eternally glorifying the undying feats of the great Generalissimos Kim Il Sung and Kim Jong Il who dedicated their all to developing the Chuch’e-oriented movement of the Korean children” and  “congratulated the participants in the congress who demonstrated before the world through the congress the spirit of the KCU members firmly preparing themselves to be dependable builders of the thriving nation.”  He also “expressed expectation and belief that the delegates to the 7th Congress of the KCU would always take the lead in consolidating the KCU organizations to be stronger ranks of the pillars responsible for the future of the great Mt. Paektu (Paektusan) nation.”