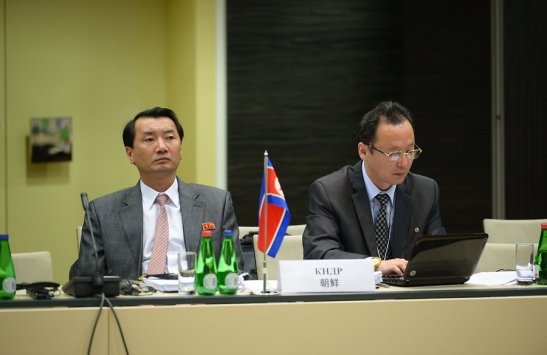 The DPRK delegation of the Ministry of Railways attends the opening session of the 41st Ministerial Meeting of the Organization for the Cooperation of Railways in Talinn, Estonia on 11 June 2013 (Photo: Tanel Meos/Ärilehe).

DPRK state media reported that Minister of Railways Jon Kil Su and a delegation returned to Pyongyang on 21 June (Friday), after attending a conference of the Organization for Cooperation of Railways [OSJD].  and visiting Russia.  Jon attended the OSJD’s 41st Ministerial Meeting held in Talinn, Estonia from 11 June through 14 June.  Estonia is one of two countries in the European Union (with France being the other) with which the DPRK does not have diplomatic relations.  Ahti Asmann, CEO of Estonian Railways, told Estonian media “North Korea is a member of the organization and therefore there is nothing special about the fact that their transport minister is taking part in the event.”  The DPRK was a founding member of the OSJD when it was organized in 1956.  Pak Chol Ho, of the Ministry of Railways, is a member of the OSJD’s Commission on Freight Traffic.

Jon Kil Su and the MOR delegation also visited Moscow.  Jon met with Russian Railways (RZD) President Vladimir Yakunin.  Russian Railways and the DPRK signed an agreement on the reconstruction of the Rajin-Khasan line which was reported to be “in its final stages.”  According to Railway Gazette, the agreement “outlines plans to create a single control centre for the entire North Korean rail network. This will be created with participation from the RasonKonTrans joint venture of Russian Railways Trading Company and the port of Rajin, as well as the North Korean Ministry of Railways. Timetables will also be jointly developed.”  The project “involves laying 54 km (33.55 miles) of dual-gauge track (1 520 mm and 1 435 mm), the reconstruction of three tunnels, the repair of a bridge over the border, and the construction of a freight terminal in Rajin port with a capacity of 4 million tonnes per year.”  The agreement “sits in the context of the framework of co-operation between Russia and North Korea established in 2000” and “is also part of a wider ambition to revive transit freight on the Trans-Korean main line.” 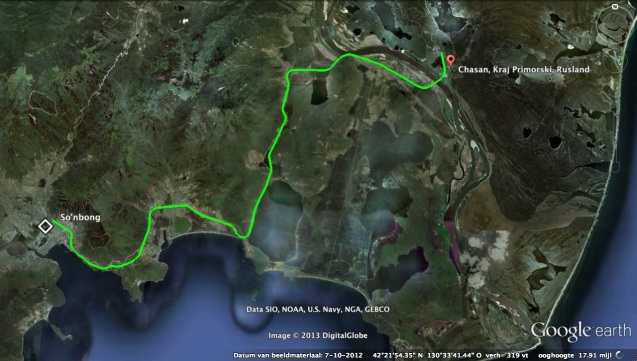 A view of the Khasan-So’nbong line (Photo: Google image)