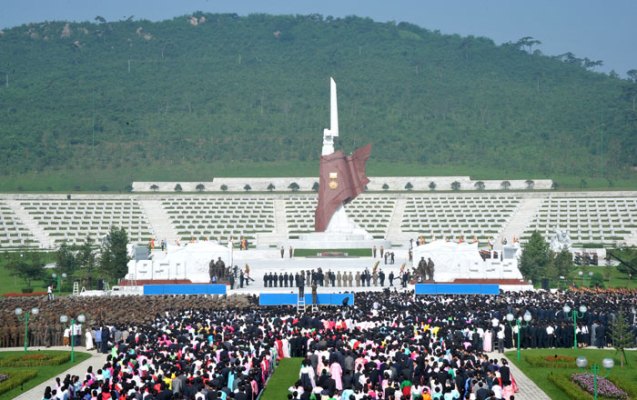 View of the Fatherland Liberation War Martyrs Cemetery in Pyongyang during a ceremony which formally opened the cemetery on 25 July 2013 (Photo: Rodong Sinmun).

KCNA described the cemetery as consisting of ” the gatepost built in a peculiar style on the basis of formative art around the Memorial Tower of the People’s Army Martyrs, wreath-laying stand “Soul of Heroes”, monument to a poem dedicated to hero soldiers and groups of sculptures” with the “remains of at least 500 martyrs are entombed in the cemetery.”  The cemetery has a Kim Il Sung (Kim Il-so’ng) autograph monument which reads “Heroic feats and undying exploits performed by the service personnel of the People’s Army in the Fatherland Liberation War will always remain in the revolutionary history of our people in golden letters and they will be conveyed down through generations. Kim Il Sung.”

Kim Ki Nam “declared the ceremony of the completion opened” after which Kim Jong Un cut a ceremonial red tape formally opening the cemetery.  A floral wreath from Kim Jong Un was delivered to the cemetery, followed by a floral wreath jointly on behalf of the Party Central Committee, the Party Central Military Commission, the National Defense Commission, the SPA Presidium and the DPRK Cabinet.  Another wreath “in the name of all Koreans” was also placed at the cemetery .  According to KCNA Kim Jong Un and the ceremony’s participants paid “silent tribute to fallen fighters of the People’s Army” and “high respects for the martyrs.”  Kim Jong Un toured the cemetery “together with senior officials of the party, state and army, delegates of war veterans, diplomatic envoys of various countries and representatives of international bodies, foreign delegations, delegates and guests and overseas Koreans. “

This entry was posted on 07/25/2013 by nkleadershipwatch in Uncategorized.