Kim Jong Un (Kim Cho’ng-u’n) met with Chinese Vice President Li Yuanchao and a PRC delegation in Pyongyang on 25 July (Thursday).  The Chinese delegation arrived in Pyongyang on earlier in the day for a three-day visit to participate in events commemorating the 60th anniversary of the end of active hostilities of the Fatherland Liberation War (Korean War).  Attending the meeting from the DPRK was 1st Vice Minister of Foreign Affairs Kim Kye Gwan.  Attending the meeting from the PRC were Zhang Yesui, executive vice-minister of Foreign Affairs, Jia Tingan, deputy director of the General Political Department of the Chinese People’s Liberation Army, Chen Fengxiang, deputy head of the International Liaison Department of the Central Committee of the CPC, Bing Zhigang, vice-governor of the Liaoning Provincial People’s Government, Chen Weigen, vice-governor of the Jilin Provincial People’s Government, and Liu Hongcai, Chinese ambassador to the DPRK.  Kim Jong Un’s last observed appearance was his attendance at a ceremony opening the Fatherland Liberation War Martyrs’ Cemetery in Pyongyang.

According to KCNA, Kim Jong Un “warmly welcomed the delegation’s visit to the DPRK and extended warm greetings to the collective leadership of the CPC with Xi Jinping as its general secretary and the Chinese people” and he “expressed thanks to the Chinese party and government for dispatching the delegation of the People’s Republic of China to the celebrations of the 60th anniversary of the victory in the Fatherland Liberation War.”  Kim Jong Un remarked that “the army and people of the DPRK will always remember the disinterested internationalist assistance rendered by the Chinese party, government and people to the Korean people during the past Fatherland Liberation War and the exploits the fighters of the Chinese People’s Volunteers performed in the war” and said “it is the steadfast will of the Workers’ Party of Korea and the Korean people to consolidate the traditional DPRK-China friendship down through generations.”  Kim Jong Un expressed “belief that the invincible vitality of this friendship, the common treasure of the two peoples, would be more powerfully demonstrated in the future thanks to the joint efforts of both sides in the future.”  KCNA reported that Kim Jong Un “exchanged with the guests views on the issue of boosting the relations between the two countries and the matter of ensuring peace and security in Northeast Asia and the world and other issues of mutual concern” and that the interaction “proceeded in a friendly and amicable atmosphere.”  After the meeting, the PRC delegation presented Kim Jong Un with gifts and a commemorative photo-op with the Chinese delegation took place. 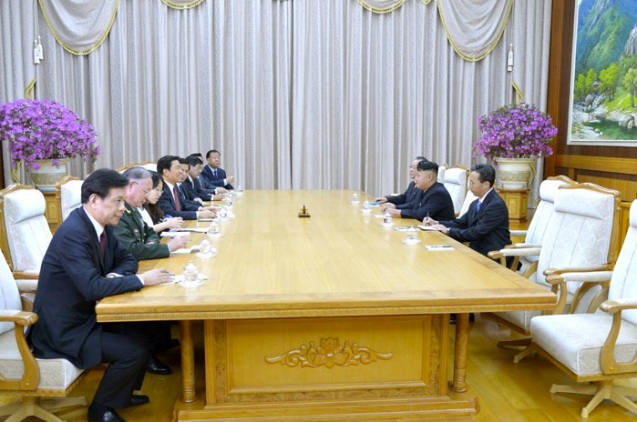 According to Xinhua‘s English-language service Li told Kim Jong Un “the anniversary was a chance to remember the outstanding sons and daughters of China and the DPRK who sacrificed their lives to defend their homelands.  “Reviewing history, we deeply feel that today’s peace is hard earned and should be cherished doubly.”  Li also said that “the China-DPRK relationship was entering a new period that built on the past and prepared for the future” and that “China was willing to work with the DPRK to strengthen mutual trust and communications, expand exchanges and cooperation in various fields and advance bilateral ties.”  According to Xinhua Li also “noted that, as a neighbor of the Korean Peninsula, China persisted in the realization of its denuclearization and the maintenance of its peace and stability.  China insisted problems should be solved by dialogue and negotiation.  Li said China would like to push the resumption of the Six-Party Talks and devote itself to the denuclearization of the Korean Peninsula together with all related parties, in a bid to achieve peace in the region.”

According to Xinhua Kim Jong Un said “the Workers’ Party of Korea and the DPRK people would remember the martyrs of the DPRK and China who sacrificed in the war forever” and that “the DPRK highly regarded the great achievements of China’s socialist cause, and valued its traditional friendship with China.”  Kim Jong Un added that “his country was willing to promote its communication and cooperation with China, and push the development of the two countries’ relationship.”  Kim Jong Un also remarked that “the DPRK was dedicated to developing its economy and improving its people’s lives, which required a stable outer environment.  The DPRK support China’s efforts to restart the Six-Party Talks and would like to make efforts with all parties to protect the peace and stability of the Korean Peninsula.”

This entry was posted on 07/25/2013 by nkleadershipwatch in Uncategorized.