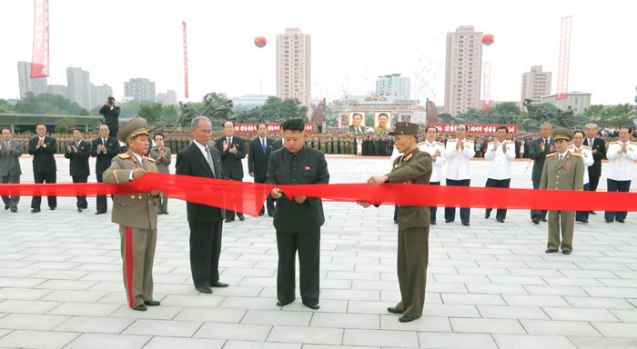 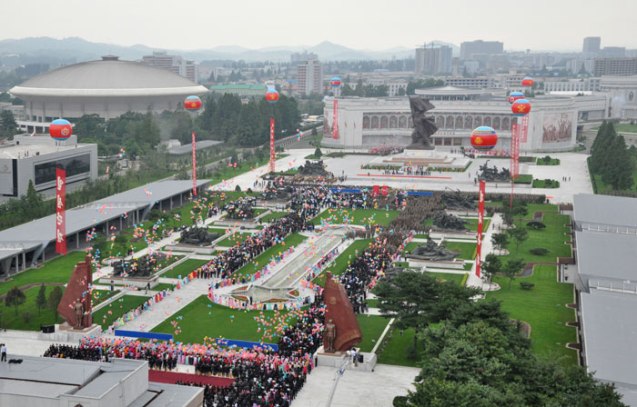 Overview of the Victorious Fatherland Liberation War (Korean War) monument park and VFLW Museum in Pyongyang on 27 July 2013, the venue for a ceremony opening the renovation of the museum and monument park (Photo: Rodong Sinmun). 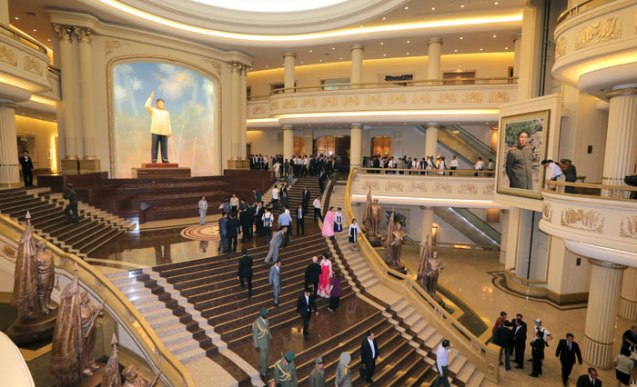 According to KCNA, “the area centering around the Monument to Victorious War has turned into a large open-air museum as it has an open-air exhibition including an exhibition of merited weapons.”  Kim Jong Un arrived at the ceremony venue where he was saluted by the head of the honor guard representing the KPA’s three service branches (ground, navy, air and anti-air command) and the Worker Peasant Red Guards, followed by a 21-gun salute.  VMar Choe Ryong Hae delivered the ceremony’s opening speech.  According to KCNA, VMar Choe said “that the museum is an eternal treasure house for glorifying long the undying exploits Kim Il Sung performed by leading the war to victory and the (So’ngun) revolutionary feats of Kim Il Sung and Kim Jong Il and a hall of victory conveying to the whole world the heroic fighting spirit and feats of the service personnel and people of the DPRK who became first in defeating U.S. imperialism” and that “is also a centre for education in victorious tradition and an important base for anti-U.S. class education, which makes the service personnel and people of the DPRK renew their steadfast will to invariably carry forward the history of invincibility.”

After the speech, the KPA honor guard marched past Kim Jong Un, who then cut a ceremonial tape in front of the Victory Sculpture which formally opened the museum and monument park.  Kim Jong Un then toured the museum with senior DPRK officials, ceremony participants and the invited guests.  According to KCNA, Kim Jong Un “expressed his satisfaction over the fact that the museum has been successfully built as a treasure house of the country, a center inspiring visitors in the confrontation with the U.S. and an important base for anti-U.S education.”

This entry was posted on 07/27/2013 by nkleadershipwatch in Uncategorized.